Some “Then & Now” fun here—the difference in about 100 years in Cowlesville, NY in the Town of Bennington (Wyoming County). Top image is the old covered bridge spanning Cayuga Creek there in the 1920’s, bottom image is the new covered bridge being built in the exact same spot on Schoellkopf Road. This area of WNY had six covered bridges back in the day. An iron bridge replaced the old covered bridge in the 1930’s and when THAT bridge needed replacing, the folks in Wyoming County went old school. I’ve been documenting the exciting process here on the page. Completion of the new covered bridge, America’s newest such span, is expected in May. The new single lane bridge will be able to pass cars, trucks, buses and plows. Superb work taking place by L.C. Whitford Inc. of Wellsville, NY! LaBella Associates of Rochester has designed a fabulous structure.

Heading into the homestretch at one of the coolest construction projects in all of America. The covered bridge being built in Cowlesville, NY in the Town of Bennington over Cayuga Creek there is progressing wonderfully. It’s a waiting game now as consistently good weather is needed for the final work that needs to be done. That work includes: installing the seamless aluminum roof, adding guide rails at each entry point of the bridge, applying fire repellent on the entire wood structure, grading of the road leading to both approaches and, lastly, blacktopping the surface inside the structure. The bridge, made of Southern Pine, will be the newest covered bridge in the United States, a one lane span capable of passing cars, trucks, buses and plows on this area of Schoellkopf Road here. Cowlesville had six covered bridges back in the late 1800’s—this is a nod to the rich history of this specific area of Western New York. L.C. Whitford Inc. of Wellsville, NY has been the construction firm on the job—they’ve built a masterpiece. LaBella Associates of Rochester provided a design worthy of national accolades. Completion is expected by the end of May—I was there on Monday and it looks terrific! 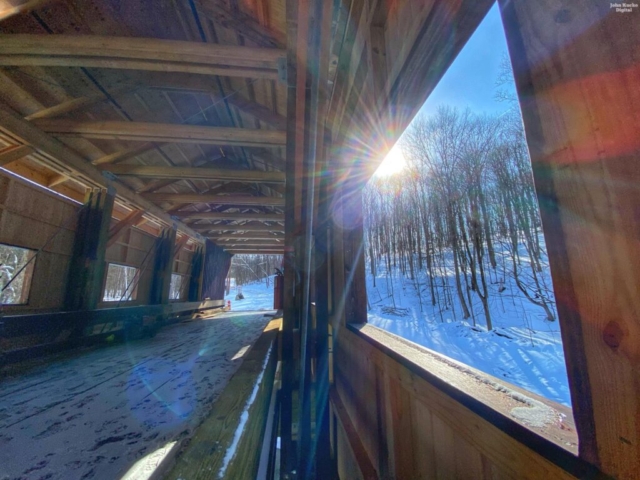 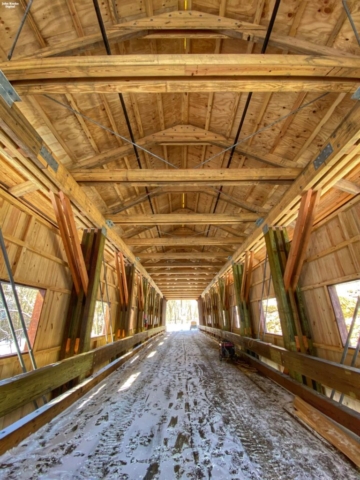 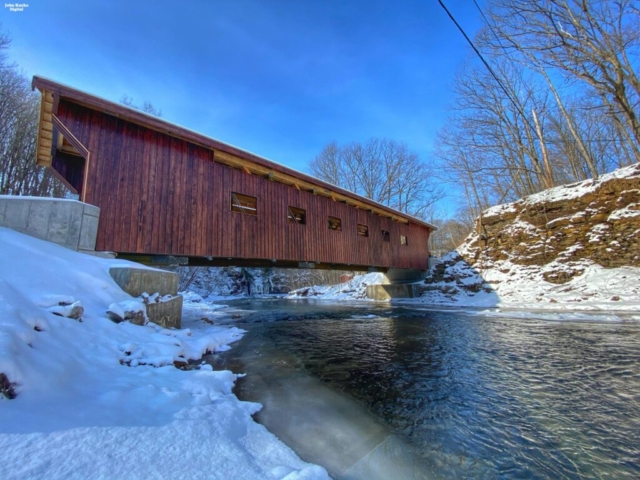 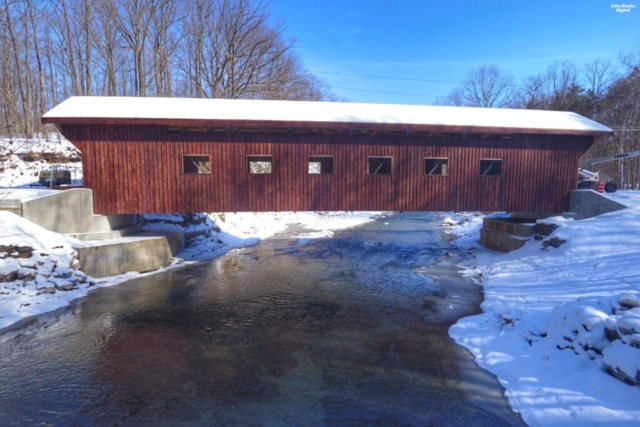 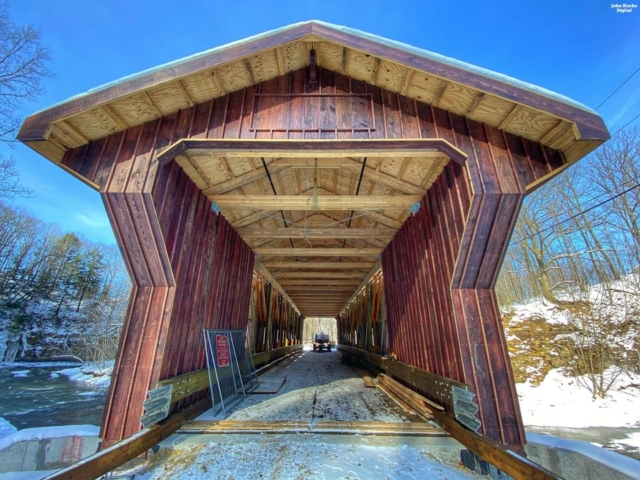 An amazing tale of one bridge, that has now been erected in three very different locales in Western New York over the last 130 years. You know the stunning covered bridge I’ve been documenting in Wyoming County in Cowlesville, NY? This wrought iron bridge is the one that was taken out of there along Cayuga Creek (left image) to make way for the wooden bridge. That same iron bridge was repainted and installed over Wiscoy Creek today in Pike, NY at the Wyoming County fairgrounds there (right image). The bridge has an amazing history, first serving the Gowanda, NY community (Erie County) in the late 1800’s until 1930. It was installed on Schoellkopf Road in Cowlesville (Town of Bennington) in 1933 and remained there until last May when it was pulled to make way for the wooden covered bridge which will be completed in May. The old iron bridge was repainted in Buffalo by Niagara Coatings. Some iron pieces were replaced by Upstate Steel in Buffalo. The paint color was ordered to match that of the Genesee Arch Bridge at nearby Letchworth State Park—further endearing me to this documentation. Today a crew from C.P. Ward lifted the iron structure, after it was assembled on-site, and placed it over Wiscoy Creek. Chris Wright was the one with the deft touch at the controls of the massive crane. Once again, L.C. Whitford Inc. of Wellsville, NY was charged with making this all happen. They have fast become my favorite construction firm in America. Their work on the covered bridge has been award winning. Rochester’s LaBella Associates was the design firm on this project, just like with the covered bridge, as well. Wyoming County is leading by example on how to make use of these old structures, while also having the foresight to see the value of building a new, nostalgic covered bridge in Cowlesville—a place that had six covered bridges back in the day. This iron bridge now has its third (and likely) final home. It’ll be there in Pike at the fairgrounds for decades to come—primarily as a footbridge, but also capable of withstanding 12 tons. What a legacy!

News from Giant Food Mart: Job openings and Lotto is back!