FRIENDSHIP — Tuesday night called for an evening of cold rain. In Friendship, that was the case both inside and outside of the gym.

Indoors, that was caused by the Arkport/Canaseraga Wolves, as they ignited their three-point play from downtown right from the very beginning. At the end of the , the team launched 14 of them to set the tone against host Friendship/Scio in what was a brilliant first half to successfully climb back to the .500 mark on the season with a 66-34 victory.

Arkport/Canaseragaa brought the heat right away against Friendship/Scio in the opening stages of the night, as they knock down their first trio of three-pointers to create a momentous charge of energy off their full-court press on defense, which kept their opposition off the board despite breaking through it, with an 11-2 run near midway.

Friendship/Scio (3-10) was able to shake off the rocky start however with a couple of nice teardrops from inside the paint by both of their leaders on offense — Ethan Davenport and Brenden Loucks, earning another boost along the way from Davenport on a breakaway lay-in off a Matt Donohue pass near half-court off a Wolves turnover, trimming the deficit to five.

After ending the first quarter strongly, the Wolves fired right once again with another devastating blow — a 14-4 run of Friendship/Scio led by another powerful showing from three-point range, including from Pete Patrick, who had eight of the team’s 14 total, to record a game-high 24 points.

The Wolves would then lock up the victory with one final run of the hosts in white and purple upon their return to the court for the second half, holding Friendship/Scio to nine points in the midst of their 18-9 run to pull away permanently.

Friendship/Scio was led by Loucks underneath, netting 19 team-high points, while Davenport followed with 12. Taylor Moore rounded off the scoring with three points of his own.

Up next is a Thursday night trip to Houghton Academy for Friendship/Scio, as they battle the host Panthers in a 6:30 p.m. tip-off.

BOLIVAR — After what was a Showcase-ending spectacle with Bath-Haverling to close out the annual tournament’s seventh installment this past weekend, the Wolverines of Bolivar-Richburg wanted to make sure that their next step was a giant one forward in the right direction.

On Tuesday, they had that chance when the Canisteo-Greenwood Redskins entered the Wolverines Den for their second and final meeting of the season.

Each team would split a run right down the middle in the opening half of play, with the Redskins cutting the deficit to within arms length at the break to create a more even playing ground. Canisteo-Greenwood would then draw within even going into the fourth quarter, but for Bolivar-Richburg, it was a chance to get away.

As both teams worked their towards a 40-40 tie early in the fourth quarter, the Wolverines picked their exact moment to strike, engineering a run that consisted of 10 consecutive points across the next four minutes while the defense in turn, held the fort down until the very end to complete their bounce back with a 56-50 victory over the Redskins.

“The boys played hard, and hopefully this springs us ahead down the stretch,” said Wolverines coach Justin Thomas. “We really showed up and turned it up to clamp it down in the fourth. I told the guys that we have to put four quarters like this together. We did fumble our way through the second and third instead of trying to pull away. They outrebounded us bad, and we couldn’t afford to get one. Canisteo really scrapped and battled to stay in this game, but I was glad to have put together the finish that we did.”

The Wolverines (10-1) were the first to score a big run of Canisteo-Greenwood, scoring 12 of the last 15 points after a quick back-and-forth battle through the opening stages of the battle. But the tables were soon turned against the hosts in white and red, as the Redskins fought their way back to within reach by the time the half closed up, as they doubled up their opposition by a 16-8 to close the gap down to a pair.

Both teams would then create a much more level playing surface after three quarters of play, as the Redskins finished off their early deficit to force a 34-34 tie. But in the last eight minutes, a big finish was in store for Bolivar-Richburg, as they escaped the grasp of Canisteo-Greenwood with a 10-0 run after a 40-40 tie, garnering enough room to hang on for the victory.

Helping that cause was Evan Pinney, who came in through the clutch with nine of his 16 points coming in the team’s 22-point frame. Pinney would also add six rebounds along with a pair of assists and steals. Leading the scoring was Aydin Sisson, who posted a game-high 22 points. Landon Barkley chipped in with 12 points to go with three assists and three steals, while David Baldwin led the rebounding off the glass with 12.

Bolivar-Richburg will look to maintain the momentum going into Thursday night, visiting the Eagles of Fillmore for a big clash at 7:30 p.m.

HOUGHTON — A defensive battle formulated right from the opening tip on Tuesday in Houghton, with Andover/Whitesville and host Houghton Academy battling wire-to-wire for the early upper-hand.

But when the second half came around, an opening was created. One that was capitalized upon by Andover/Whitesville, as CJ Estep and Kohler Niedermaier fronted an all-balanced attack to record their biggest run of the game, running the table against the Panthers to garner all the room they needed to hang on for the 44-32 road win — their third in the last five games.

“It was a great night for our team defense,” said Andover/Whitesville coach Jimmy Joyce. “The guys were really working together well. Kohler had a dominant night inside. He really worked hard inside grabbing the rebounds to help set everything up. They brought a press on us, but we did a great job breaking it to get some points.”

Andover/Whitesville (6-8) broke open the floodgates to end the first half, as they broke an early, defensive 6-6 tie with Houghton Academy with a massive 18-9 run led by Estep and Niedermaier down low. The two offensive powers combined to record 11 of the team’s 18 points from within the frame to help lay the foundation down.

With a 24-15 lead in hand at the break, the visitors in purple went on to keep the momentum in their favor over the Panthers (1-6) with one final outburst of offense, while holding the hosts to just two shots from the field in the process to complete a strong victory over the road.

Niedermaier led all scorers for Andover/Whitesville with a 12-point, 16-rebound double-double, while Estep compiled 11 points of his own. Gage Hall had six points.

For Houghton Academy, James Adenuga led the charge with a game-high 15 points. Josh Davidson added in seven points, while Pedro Rebello had six. The Panthers are back in action on their home floor Thursday night, hosting Friendship/Scio in a 6:30 p.m. contest.

Andover/Whitesville will look to keep the ball rolling into Friday night for a 7:30 p.m. meeting with the Hinsdale Bobcats. 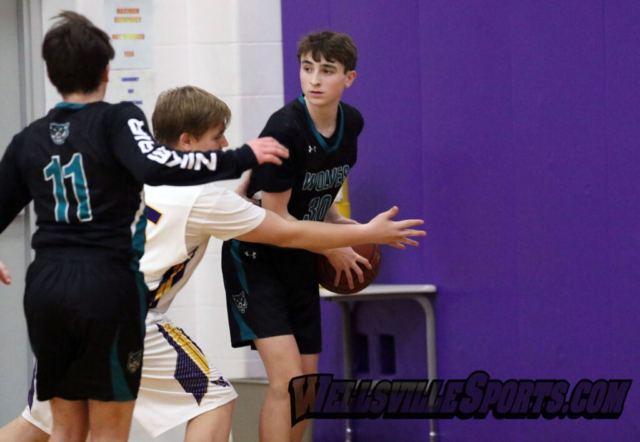 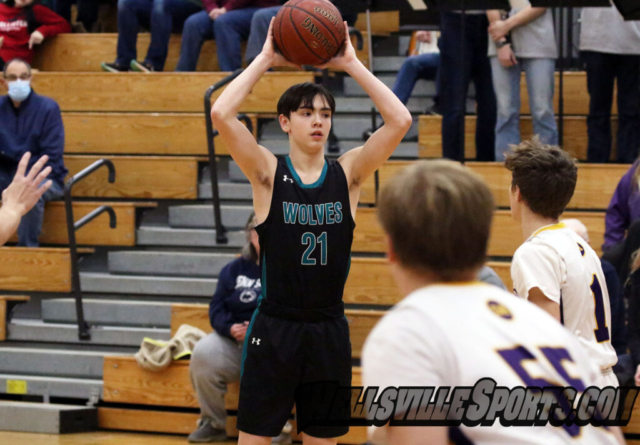 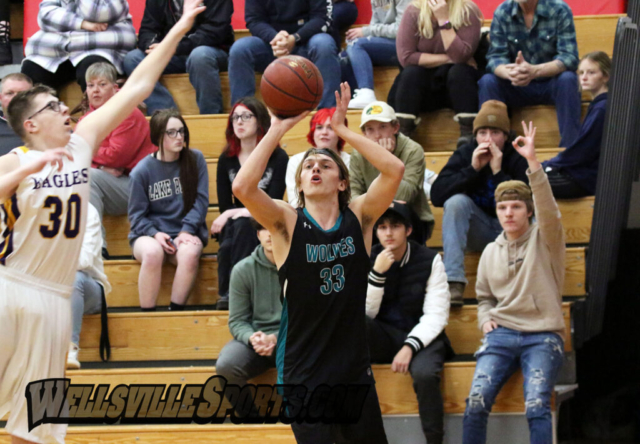 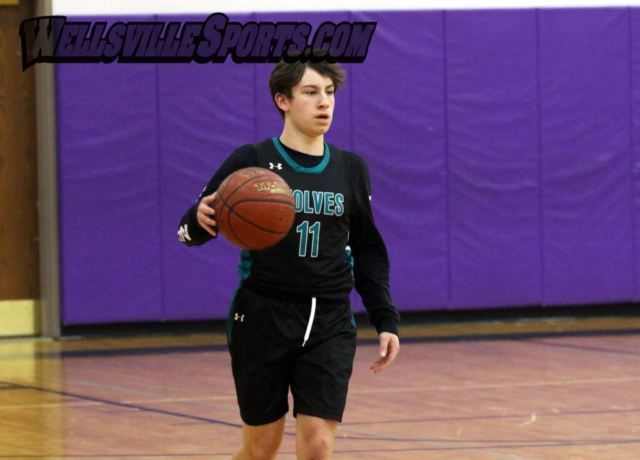 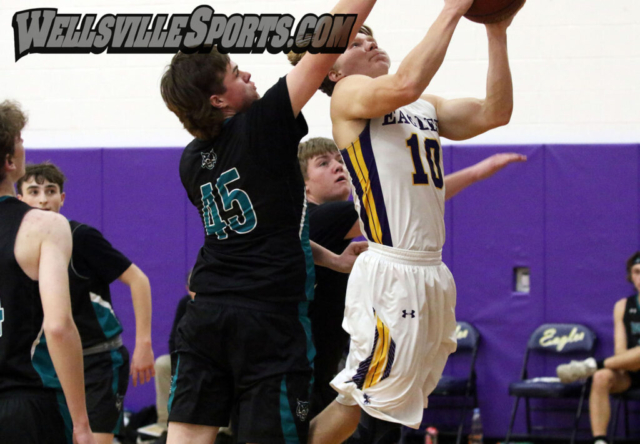