(Note: As stats and scoring summaries are not made available for Wellsville football, Chris Brooks put together this detailed story and scoring report from YouTube)

Wellsville had Senior Night on Friday, with the Pembroke Dragons in town for a visit.

And right out of the gate in the opening quarter, the Dragons were on the move taking a 41-0 lead.

Paid in part by impressive displays of offensive longevity on the field, they would record three straight scores off drives of 70 yards or more — all of which were scored by Tyson Totton from the backfield, who had a monster game for the visitors to set the tone with a huge first half lead that was never threatened, as they played spoiler on Wellsville’s Homecoming with a 41-14 victory.

It would begin with a 14-0 lead in the first quarter, beginning on their second drive after a JJ Howard interception. From their own 15-yard line, the big finish was an 85 yard drive which was paced by a 43-yard score by Totton — one of multiple he had in the game, to give the Dragons the early lead near midway.

The lead would grow on the very next possession, despite a bright window for the Lions (0-5) on defense to knock Pembroke backwards to as far as their own 14-yard line. But all of that ground was made up rather quickly to end the quarter strong, as Totton made a move to the outside and down the far sidelines, sprinting away from the Wellsville defense for an 86-yard touchdown straight to the house for his second score in just over three minutes.

In the second quarter, the Dragons would pull themselves away out of Wellsville’s reach. With their third straight drive of longevity, a mixed bag of short distance runs down the field would see them enter Lions territory from their own 26-yard line, ultimately cashing in on Totton’s third score of the game from 47 yards away.

Immediately following the score, the Dragons would capitalize on a muffed kickoff return from the Lions and make their way down the field to start up two more times in the end zone before the end of the half, scoring from the goal line on a 3-yard run from Cayden Pfalzer.

Pembroke would go on to score 41 straight points with Totton finishing off the attack with his fourth touchdown, before the Lions would find their way onto the board themselves to end the shutout with two scores — both off the arm of JJ Howard, who found a wide open Brennen Geffers on the run for a 36-yard bomb to get on the board.

On the next Dragons possession, a fumble would be recovered by the Lions defense after a botched handoff in the backfield, setting up shop for the hosts in orange at the Pembroke 22-yard line. After a run just past the line of scrimmage, Howard went to the air one final time, after a low snap from center, connecting with Jayden Acker in the back of the end zone for a 21-yard touchdown.

But that would be all the Wellsville offense would muster, as the Dragons held steady in the fourth quarter to maintain their lead for good.

Further in-depth statistics were not made available to report upon publication.

Wellsville is now off until next Saturday when they make one of their final road trips of the season, visiting the Red Jacket Indians in a 1 p.m. kickoff.

BOLIVAR — The Bolivar-Richburg offense has produced tons of electricity this season, which has been led by their dynamic run-game fronted by the speedy Ethan Coleman. Because of it, the Wolverines have been able to get off to a phenomenal 4-0 start to their first ever tenure in 8-Man football.

On Friday at Dunsmore-Latimer Field, Homecoming weekend had officially arrived, with C.G. Finney/Northstar in town for a visit — even more so, a chance to establish an abundant momentum shift into next week’s titanic showdown with long-time rival and State-ranked Canisteo-Greenwood.

The first half would give them all the time they needed to make that enormous statement.

Paced by a lead-off run to the house from Ethan Coleman, a myriad of Wolverines on offense and defense would all chip in to record a 24-0 lead at the break, with Caden Allen and Tavyn MacDonell then taking over the show for the remainder of the game, accounting for the next four Bolivar-Richburg scores to run away from Finney/Northstar’s grasp permanently to secure a 40-7 rout for their fifth straight win.

Coleman would get the tires going for the Wolverines (5-0) on their very first drive of the game, using his legs on the third play to put a quick bow on the hot start, scoring from 38 yards out to put the team on the board.

Finney/Northstar nearly had a quick response themselves in perhaps the momentum shifter of the game — a potential game-tying drive stalling out at the Bolivar-Richburg goal line.

With the Falcons knocking on the doorstep, a bad snap for the offense would recoil all the way back to their own 20-yard line, which would then result in a half-sack each for Zach Mitchell and Trent Sibble. On the very next play, another bad snap under center would result in Sibble falling on top of the ball to give the Wolverines the possession back for the offense.

From that point forward, all catalyzing would remain in Bolivar-Richburg’s favor, as they went on to score the next 32 points in a row, headed by the tandem of Caden Allen and Tavyn MacDonell beginning in the second quarter, when they were faced with their first fourth down conversion. They would garner a first down after a beautifully connected pass play up to the 11-yard line where Allen would then finish off the drive to branch out the advantage to 16 on his run.

From the ground to the air, Allen used his arm to take care of business with a perfect strike on a slant to MacDonell from 27 yards out to close out the first half scoring with a 24-0 lead on the Falcons.

The two Wolverines would then continue adding on in the second half, where they would post another 16-point frame to extend their lead to 40-0, with MacDonell catching another 35-yard strike before Allen hustled on the ground from 23 yards away to finish off a perfect night of offense, despite the Falcons eliminating the shutout in the final 12 minutes.

At game’s end, Allen would be awarded Homecoming MVP on offense for his four touchdown game.

As for the defense, their leader on the front lines, Trent Sibble, would keep Finney/Northstar at a complete standstill after their game-tying bid in the second quarter was erased, as he recorded eight tackles to go with his half-sack to become MVP on the defensive side. The defense as a whole would record 46 total tackles against the Falcons, with Coleman helping further his cause with seven of his own. Zach Mitchell garnered six tackles, while Kingston Loucks and Charles Millitello each had five.

Next up, is a trip to Canisteo where the Wolverines will put their 5-0 start on the line against another 5-0 start that belongs to the State-ranked Redskins, as the two longtime rivals get set to clash next Friday night in a 7 p.m. kickoff in a game for 8-Man supremacy. 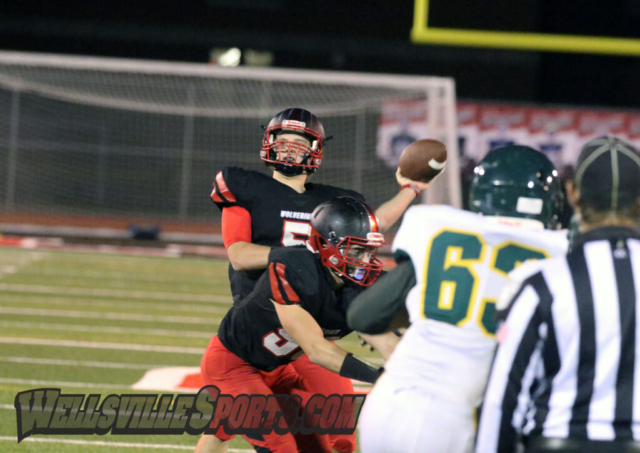 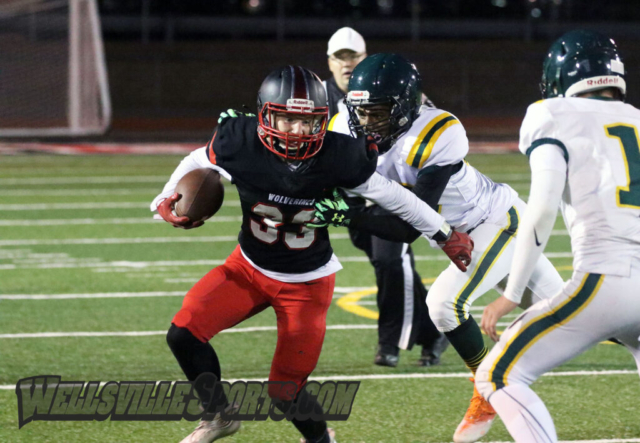 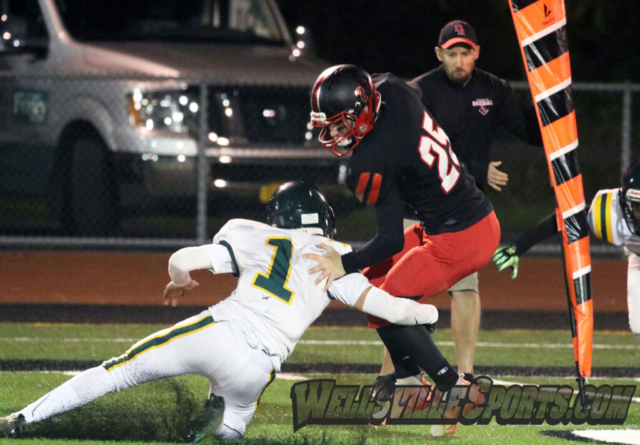 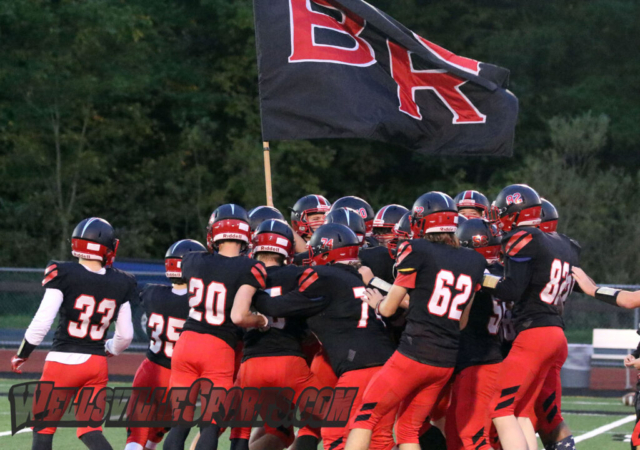 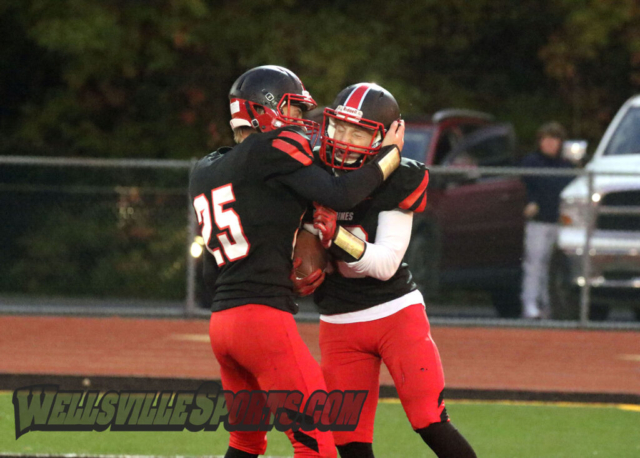 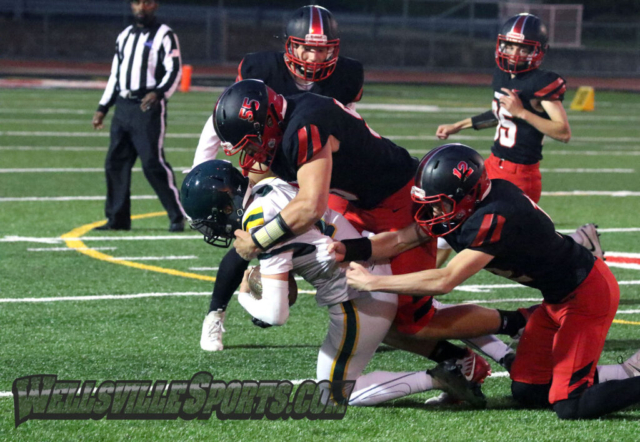 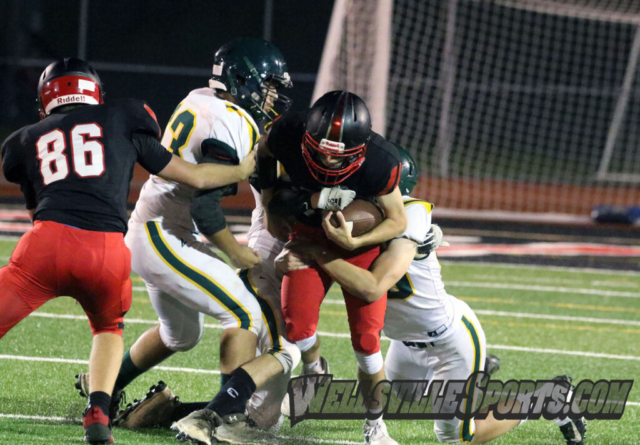