Aidan Riley cruises in for a layup after a steal against Walsh Thursday night. Chris Brooks photo.

The last game of the regular season for the Wellsville Lions basketball team was a home game Thursday night hosting Archbishop Walsh.

Wellsville coach Raymie Auman was hoping to use a lot of players and work on different defenses.

However, the Lions were holding on to a 12-8 lead after the first quarter when it was time to get offensive … with rebounds.

Auman asked in the huddle to junior Logan Dunbar and senior Alex Perkins how many offensive rebounds they had.

When the final horn sounded, Perkins and Dunbar were relaxing on the bench with a total of 29 rebounds, 15 coming as offensive boards as Wellsville finished off Walsh, 69-28.

The No. 1 seed is Dansville with Le Roy and Mynderse at two and three.

“I asked Logan and Alex who out there can rebound with you? They took on the challenge. Logan getting rebounds is going to be a key for us in sectionals,” Auman said. “Every game is an opportunity to get better. And today, I thought we had guys step up who can help us get better for sectionals. It wasn’t Eli, Logan, Cody, it was other guys who played valuable minutes and did a lot of good things out there.

“I had some guys guarding people that was a little different match-up for them so they could get used to it,” he added.

Defensive specialist Aidan Riley returned to the lineup after missing games with an injury and had a quick steal and layup. While he was gone, Tyler Vogel came up from the JV team and received minutes, including Thursday as he scored five points. The game featured JV call-ups J.J. Howard and Alex Green as well.

“Our practices just got a lot more competitive,” said Auman. “With Ty, J.J, and Alex, who are all outstanding basketball players, we have higher numbers and we can run practices at a high pace, it’ a nice addition.”

It showed on Thursday.

Dunbar finished with a game-high 22 points and 21 rebounds, 11 of them offensive. Perkins had four points and eight boards, Cody Costello had four boards, two assists and seven points while Eli Schmidt had nine points and four fouls.

Cooper Brockway drained an early 3-pointer to give Wellsville a lead and finished with five points and a board while Asher Billings drained two 3-pointers for six, Connor Ferguson had three boards and four points, Kalob Phelps had three rebounds and two points and Dalton Ketcher had a 3-pointer and a rebound.

For Walsh, Russell Maine had a team-high 17 points. 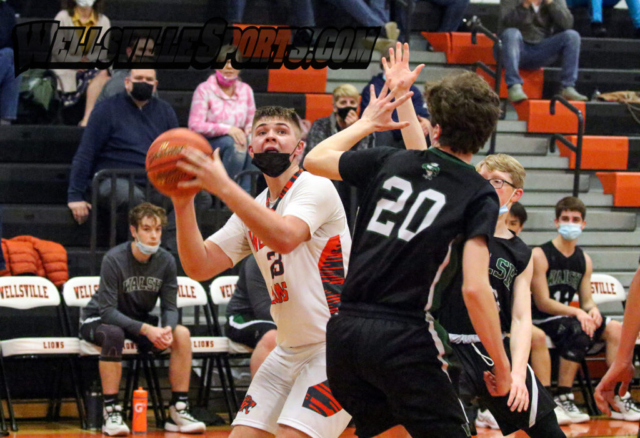 Flooding closes some roads in the village of Wellsville

We welcome the Ryan Agencies to the Wellsville Sun!!