Houghton Academy senior Jessica Prentice with her 1,000-point ball and her teammates and coaches.

HOUGHTON — It’s been nearly 10 years since Houghton Academy last saw a player punch an exclusive ticket into a club where some of the school’s elites from the past have forever encapsulated their careers playing the game. The last entrant is also the Panthers’ All-Time leader in scoring, a cornerstone to the team’s Sectional Championship back in 2014 — Derek Brooks.

That long wait came to an end.

Despite Houghton Academy being swept by Friendship/Scio in a boys-girls basketball doubleheader on Thursday, Lady Panthers senior Jessica Prentice would re-write a paramount piece of history for the school to take the night by storm, becoming just the sixth 1,000-point scorer in school history after her 15-point performance to pace the offense and eclipse the millennium mark in her brilliant career.

“It’s a big night for us, and a big night for the school. We’ve only had five previous 1,000 point scorers, so that is pretty exciting in itself,” said Panthers coach Jeff Prentice. “She’s been the core of our team for the last number of years, even when she was still in junior high with some other talented players surrounding her. She’s tough to go up against, and as a school and team, we are really proud of all she has accomplished to get this tonight.”

The Lady Panthers (2-8) would lead off the night on their home hardwood in the first battle against Friendship/Scio, one that saw them race stride for stride across the first half, with the visitors in blue grabbing the upper hand in each quarter, including a strong finish in the second frame to take a 20-14 lead.

Holding the momentum coming back out for the second half, Friendship/Scio (8-3) retained it by using the third quarter to pull away and out of reach of the Lady Panthers, as they engineered a 17-7 run to close out the victory behind the tag-team of Nevaeh Ross and Kadence Donohue, as the two combined to record 25 of the team’s 38 points.

Both Friendship/Scio sharpshooters paced the evening on the frontlines with a double-double each, with Donohue netting 13 team-high points to pair with 12 rebounds, while Ross followed with 12 points and 14 boards. Adding help along the way was Jenn Dickens, who had seven points.

“We took care of the ball tonight, and we shot the ball better. The biggest thing was face-guarding Jessica, she’s their biggest threat,” said Friendship/Scio coach Ashleigh Lewis. “We knew she was going to score her points, but we had a couple of girls face-guard her, and then we had some help on defense along the way. We had three fouls the entire game, so it was a really clean showing. We played hard.”

Jessica Adenuga and Laura Maya followed Prentice with the remaining 12 points for the Lady Panthers, each recording six.

To round off the evening, a fast and furious offensive battle between both Friendship/Scio and Houghton Academy boys squads. The fierce battle ensued until the first half reached its conclusion, where the momentum was held with the Panthers.

Then, a complete flip of the script, as Friendship/Scio broke loose with a third quarter shutout, holding the Panthers at a complete standstill on both ends of the floor to jump ahead for good, on their way towards a 50-33 win to sweep the night’s action on the road.

Each team would have their turn at providing a run across the first half, with Friendship/Scio (4-10) taking the first lead of the night behind their largest frame of offense of the night in the shape of an 18-point opening quarter. A short time later, the Panthers battled right back with a narrow outscoring of their own to close the gap to one when the halftime break approached.

Houghton Academy (1-7) could not find a way to hold the momentum however, as Friendship/Scio came out of the locker room firing on all cylinders to start the second half, pitching a third quarter shutout behind an 11-0 run to pull ahead of the hosts in white and blue, securing the win along the way.

Both Ethan Davenport and Brenden Loucks took charge of the offense, as the two shooters converged to record 39 of the team’s 50 points, with Davenport and his five three-pointers leading all scorers with a game-high 22 points. Loucks followed behind with 17 points inside himself, while Taylor Moore had six.

The next games for all four teams are listed as follows, below: 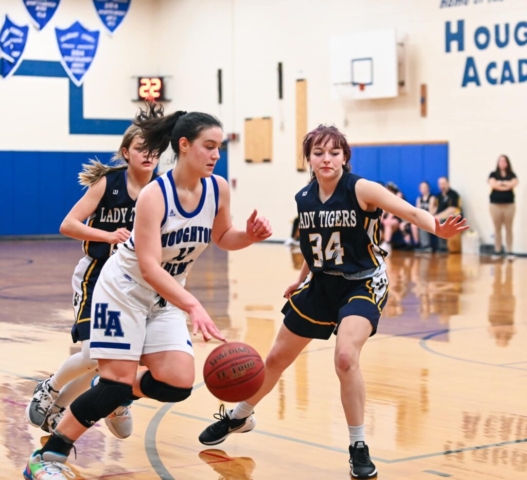 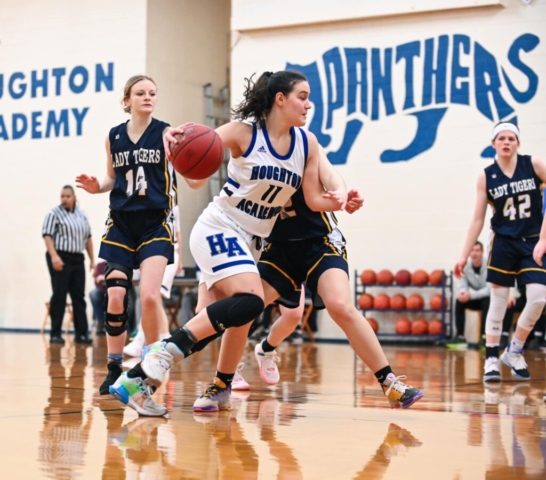 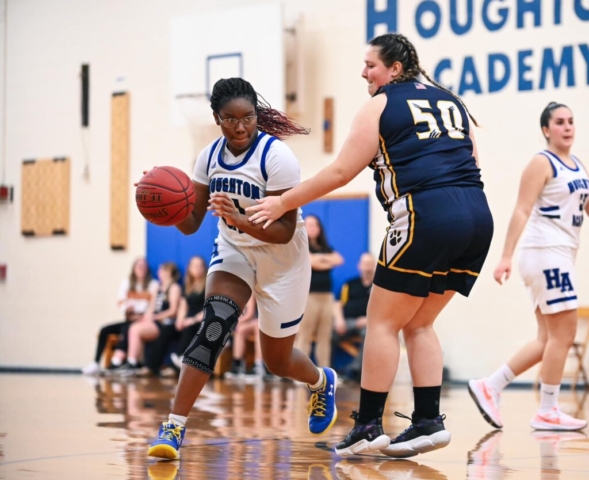 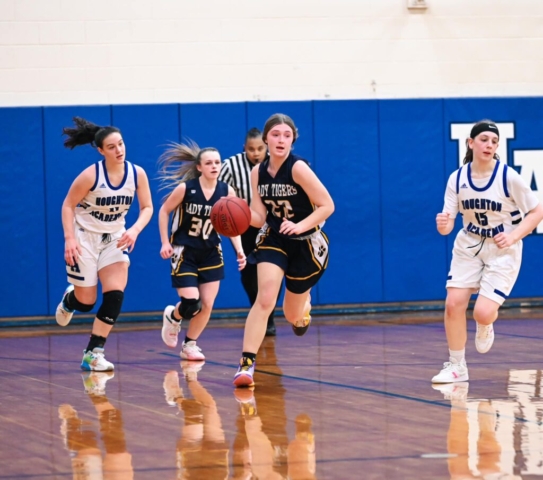 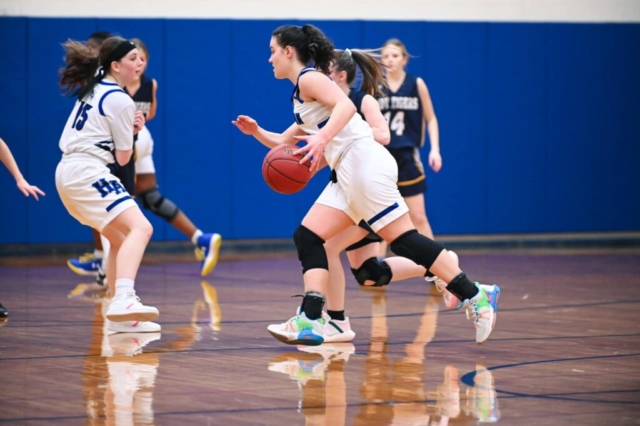 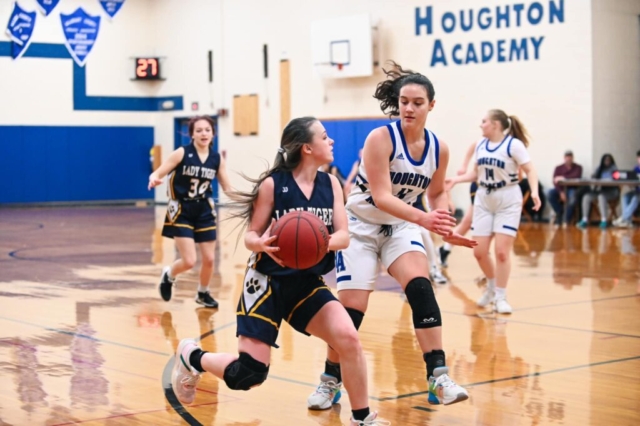 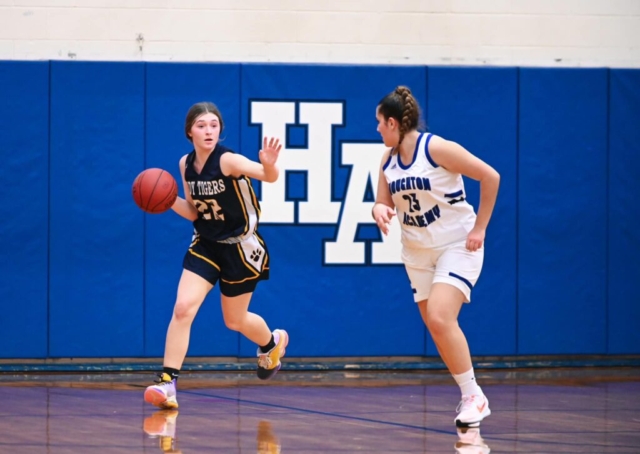 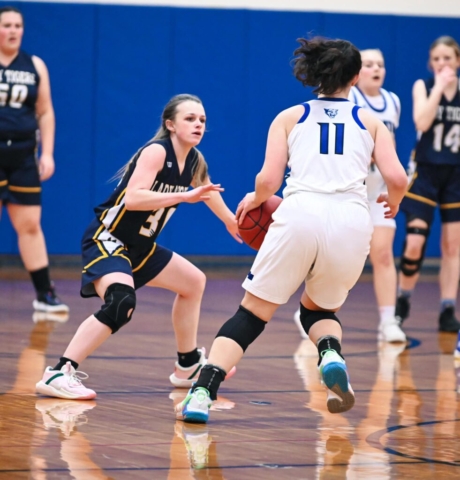 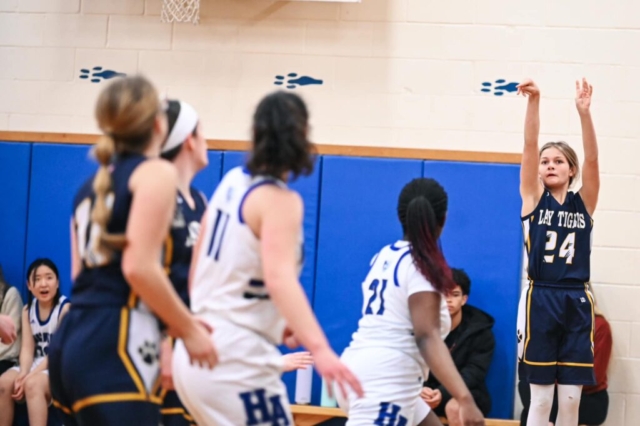 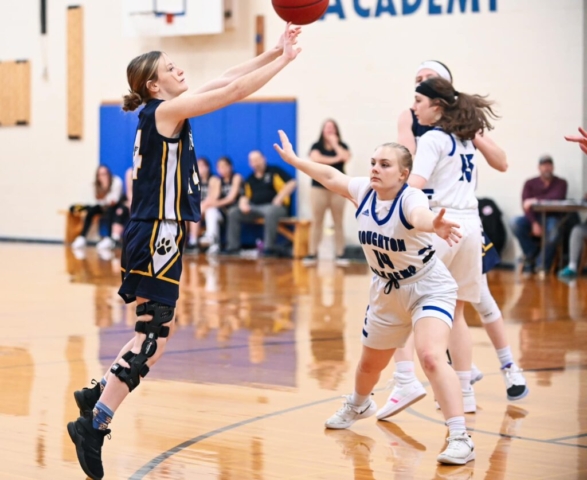 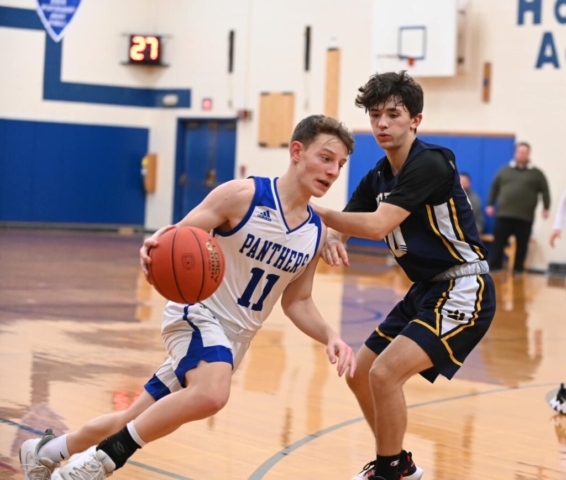 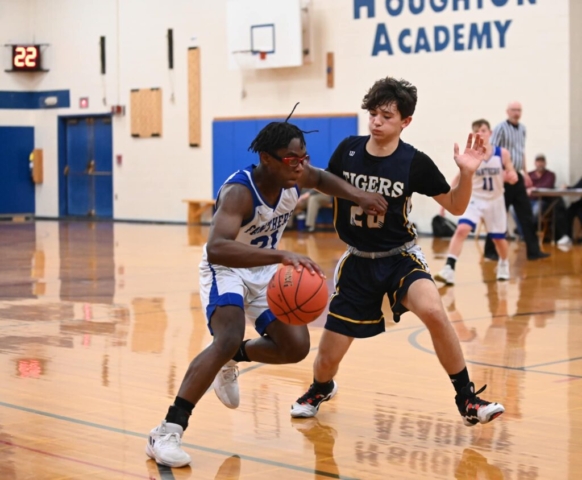 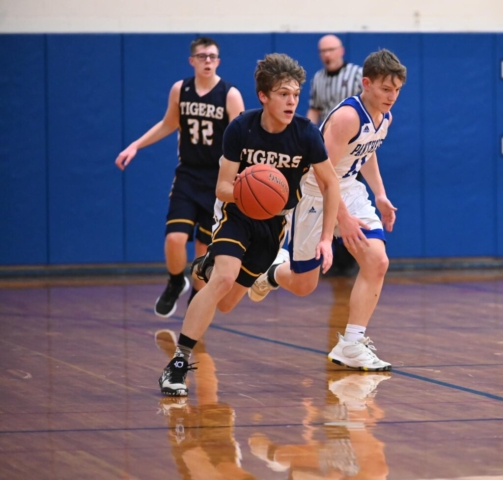 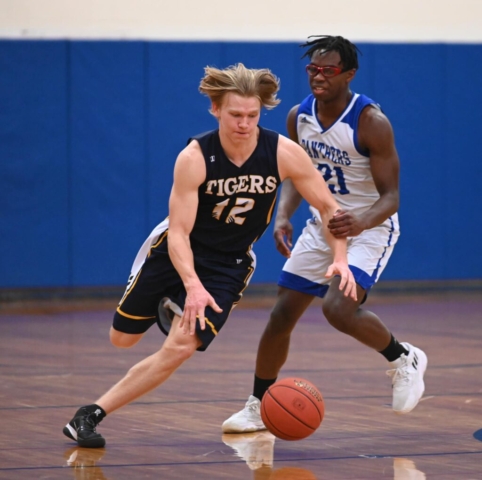 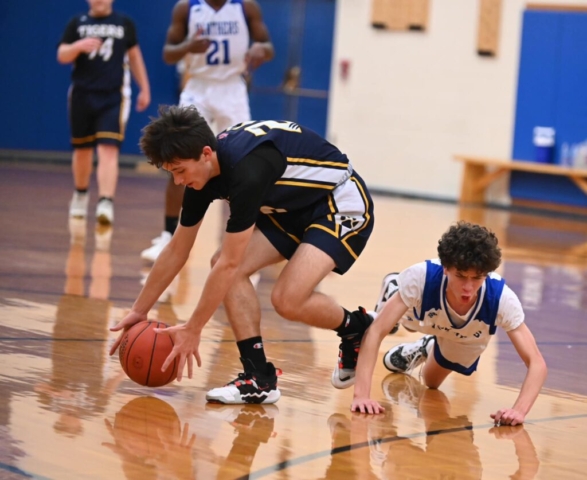 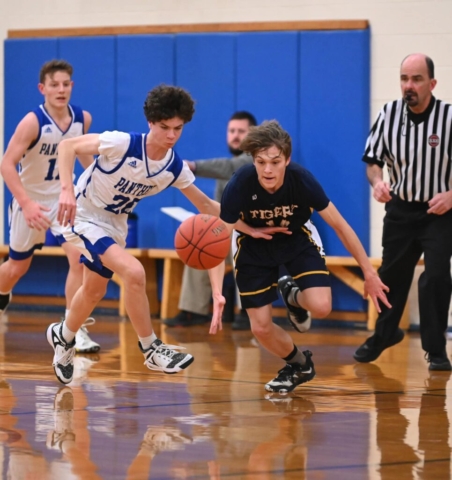 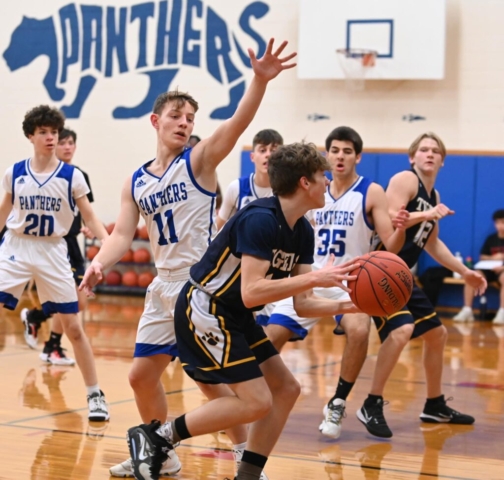 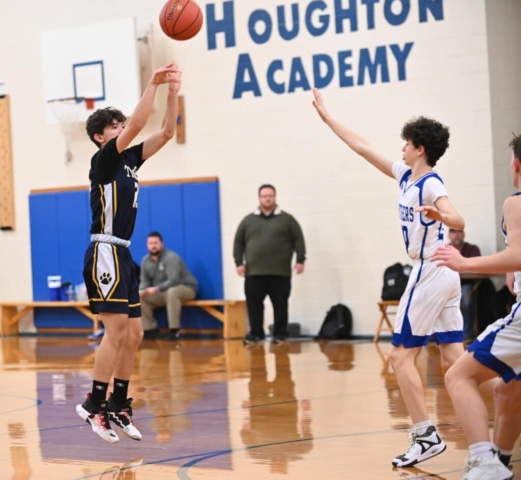 FILLMORE — It was anyone’s game, as the bleachers in Fillmore were packed to witness what was a battle right down to the finish on Thursday. Bolivar-Richburg and the host Eagles kept pace with one another the entire way right up until the very last minute of the night.

With the hosts in white and green clinging to a two-point lead over the Wolverines, something had to give. The Eagles would look to someone who had come through all night long for them, one final time.

That was Zach Sisson.

With 55 seconds left to play, the Fillmore junior came in through the clutch after receiving the ball from outside. With it, he proceeded to knock down his third and final trey of the game at the most crucial of times, branching out their lead to five before sealing the victory behind clutch free throws down the stretch, as the Eagles held on for dear life to claim a close 63-59 win over Bolivar-Richburg from within The Rock.

“What a great game to be a part of tonight. We’ve been struggling a little, and I challenged the guys to start putting the pieces to the puzzle together. B-R played really well, and the game was back and forth for four quarters. Justin (Thomas) has them playing really well, and they’re tough to guard. They utilized their quickness off screens, and it took us a while to adjust. Zach had a monster game, and the guys really looked for him. I’m really proud of Brent (Zubikowski), Jack (Cool) and Jonah (Bialek) for doing their jobs to give us that spark we needed. I’m looking forward to the rematch at their place in a couple weeks.”

Wherever Zach Sisson was on the court for Fillmore (6-4), he provided shockwaves from every angle. Inside, outside, even at the charity stripe, where he performed masterfully with an incredible and immaculate 11-for-11 outing, the majority of the shots coming from within the team’s balanced second quarter — their highest spout of offense against the Wolverines, as they broke an early 13-13 deadlock to take a 34-32 lead at the break behind a 7-for-7 tenure at the line.

In the third quarter, the Eagles would come out swinging against the Wolverines (10-2) with the help of Jair Bialek, who found his edge from downtown with a pair of threes to branch out the team’s lead to seven when the quarter marked its end.

Bolivar-Richburg quickly made all of that ground up with six straight points to kick off the last eight minutes, inching to within a point of Fillmore. From that point forward, it was a back-and-forth duel that saw the Wolverines briefly climb into the driver’s seat just past midway off a hard drive to the basket by Reiss Gaines.

It would ultimately work its way towards a 55-53 lead for the Eagles with the next three minutes of play going without a score. That was until Sisson pulled up from long range, and buried a bullseye straight between the eyes with under a minute left to play, extending the Fillmore lead to five. Despite the Wolverines remaining hot on their trail, the Eagles looked to their special teams to take care of business, as Sisson knocked down his last four shots at the stripe in a row to help seal the deal on the win.

Sisson would finish with a game and season-high 26 points to ignite the Eagles offense. Jair Bialek concluded with 16 points of his own, while Mitch Ward had 10 points. For Bolivar-Richburg, Aydin Sisson led all scorers with a team-leading 23 points. Landon Barkley pitched in with 12, while Evan Pinney recorded nine.

It will be a quick turnaround back on their home floor tonight for Fillmore, as they host their crosstown neighbors Houghton Academy in a 7:30 p.m. contest, while Bolivar-Richburg now gets set for a Monday night battle with Coudersport back home in a 7:30 p.m. tip-off.

BELFAST — Both Cuba-Rushford and Genesee Valley/Belfast were ripping and roaring through a first half, one where the visitors in blue and maroon were able to create an opening to garner a much-needed burst of momentum.

They were able to kick into an even higher gear by the time the second half took effect, as the defense buckled down on all fronts to transfer a big boost of energy to the opposite end of the floor, where the offense translated it into big points.

As a result, Cuba-Rushford accounted for a breakaway run in the third quarter to pull out of reach of Genesee Valley/Belfast and towards a 62-35 win on Thursday in head coach Pat Wight’s official return to the bench for the team.

“I’m thankful to be back for sure. Coach (Lintz) Bliven had his guys ready to roll through the first half,” Wight said. “It was highly intense and it was a really physical first half. The second half came around, and we were able to lock in defensively, and made some key adjustments and shots to go along with them.”

After both teams fought tooth and nail through a highly competitive opening minutes, the tide would soon begin to turn radically in one direction. With a 12-12 tie into the second quarter, the Rebels (12-1) would find their go-ahead edge, with Jacob Smith and his seven points leading the way in the midst of the team’s 17-7 run of Genesee Valley/Belfast to take a 10-point halftime lead.

Cuba-Rushford got the positioning they wanted on the hosts in white, and in the second half, they took complete advantage of it, coasting forward behind the guidance of Smith and Braeden Wight. The two Rebels combined to provide 13 of the team’s 20 points in the third quarter — a game-high, as they outfoxed Genesee Valley/Belfast (5-7) with a 20-9 run that allowed them to ultimately pull away towards victory down the stretch.

Smith led all scorers across the board with a game-high 24 points. Finn Ricketts chipped in with 11 points of his own, while Peyton Joy had seven points to go with seven rebounds and five big blocks.

The hosts were led by Max Wedge and his 11 team-high points. Ian McKenzie knocked down three treys, for nine points, while Kadin Logue had six.

Both teams are on the road over in Steuben County after the weekend on Monday, as Cuba-Rushford pays a 7 p.m. visit to Canisteo-Greenwood, while Genesee Valley/Belfast will be right down the road from them in Greenwood, as they prepare to take on the Jasper-Troupsburg Wildcats in a 7:15 p.m. tip-off.

WELLSVILLE — Another dominant performance, another win would come along with it for the Wellsville Lions in the water, as they set the tone for their second-to-last home meet of the regular season in style with 10 total first place finishes, four in the first half of the meet against visiting Addison on Thursday, as they took the 107-76 decision at the end of the night.

Wellsville would also go on to record two of the three relays with wins, with the team of Mariotti, Jordan, Everett and Eli Brophy all coming together to record wins in the 200 medley relay (1:53.77) right at the very start, and then ending the meet on as solid of a note with the 400 freestyle relay’s (4:01.99) medaling finish.

Wellsville is back in the water on Saturday with an 11 a.m. meet at Alfred-Almond.