WELLSVILLE — Excitement was in the air on Thursday for the final battle between Bolivar-Richburg and Wellsville in the regular season. In the early stages of the fight, both teams followed each other in their footsteps in a feature that saw the Wolverines claw back after a pair of deficits in the first two sets to give the Lions a fierce battle.

As a result, a set was awarded to each side, including a marathon second set that was scored by the Wolverines after a brilliant comeback down the homestretch.

But although the hosts in white and orange were set back because of it, it wouldn’t stop them from providing a big bounce back themselves later on, as they made sure the last two sets were obtained in their possession to record the four-set, 25-23, 26-28, 25-17, 25-17 victory — their third in a row, at the end of the night.

“They played really well tonight. We made a few errors in the second set, which allowed them to come back from that, but their attitude tonight helped keep themselves calm and be able to think on their feet,” Lions coach Adam Kellogg said. “We rallied back to take the last two sets away, and we kept the pressure on Bolivar-Richburg and didn’t let up. We are playing well as a team and we’ve started to trust each other to be there covering for one another.”

The first set saw the Lions (6-4) take control almost immediately after the opening serve, as they posted an early, big run of Bolivar-Richburg by an 11-4 count to set up shop. But with the help of Jaeger Turybury and his service, the Wolverines were able to dish out seven consecutive points to create even playing ground once more with an 11-11 tie.

The set would shift in between the teams from that point until the end, with the Wolverines (6-4) holding a narrow portion of momentum after a pair of big kills allowed them to squeeze ahead. On the other side of the net, the Lions were hot on their trail to make sure they were the team that ended with the upper hand in the end, claiming the two-point decision for the match’s first lead.

A similar start opened up the second frame, one where the Wolverines had to dig their way back in after some early miscues plagued the Lions. The hosts would begin to garner some room down the stretch however, as Wellsville gained an upper hand by as much as five at one point, but it could not be held.

As a result, Bolivar-Richburg would force the second set into extra serves. With the service of Ryder Easton, he would help his team in black and red score six of the next 10 points to tie the game at 24 before finding a way to re-open it back up one more time with the last two points they needed to claim a 28-26 marathon thriller.

Despite their efforts to tie up the match, the Lions would find a way to rebound after the tough defeat, as they came up with two strong finishes in the third and fourth sets to claim victory — a 25-17 decision in each of them to close it out.

Wellsville was led by Xavier Scott, who posted a team-high 11 kills to pair with five aces, two digs, two assists and a block. Riley Graves was not far behind, compiling nine more kills on offense to couple with two aces and a block, while setter Gavan Dickerson handed out 12 assists to help set everything up, adding in five digs, three aces and two blocks in the process.

Stats for Bolivar-Richburg were not made available to report upon publication. The Wolverines are now off until Tuesday night back on the road, visiting Fillmore for a 6 p.m. contest.

Wellsville will look for their fourth straight win when they return to action on Wednesday back on their home floor, hosting the red hot Rebels of Cuba-Rushford in a 6 p.m. first serve of their own. 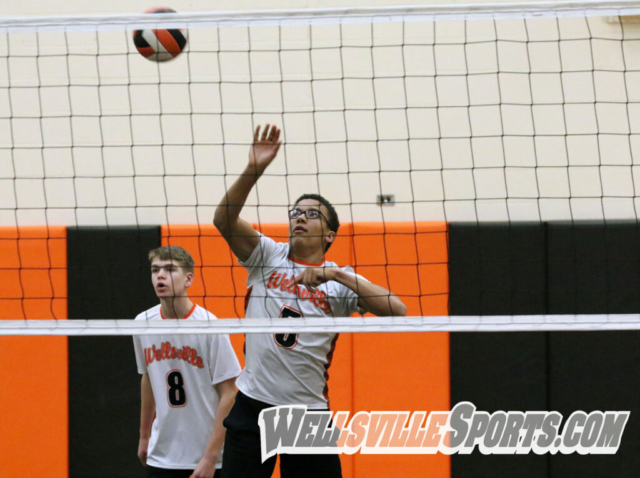 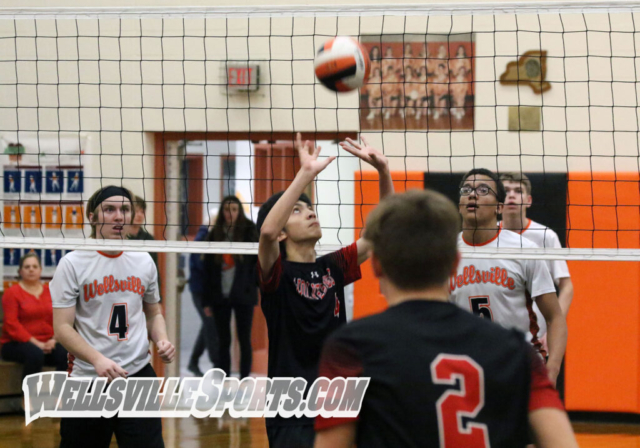 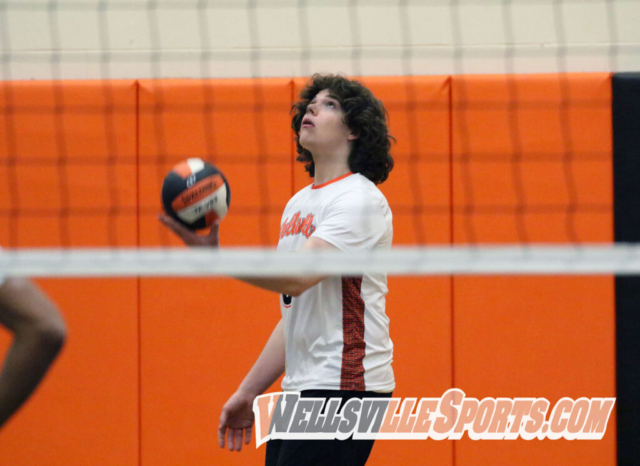 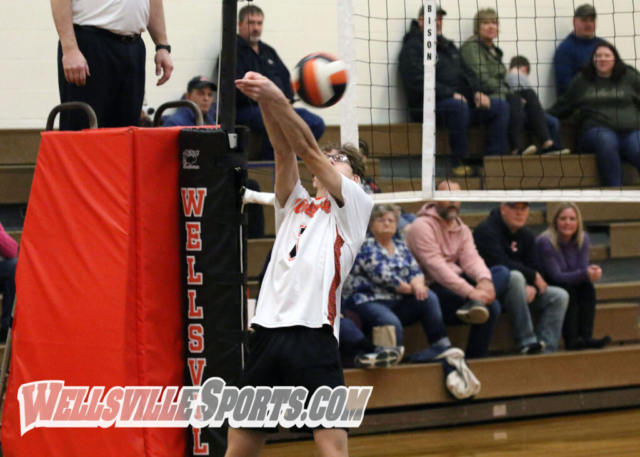 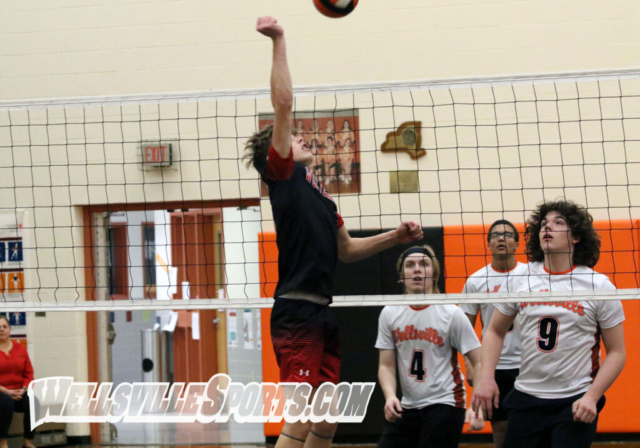 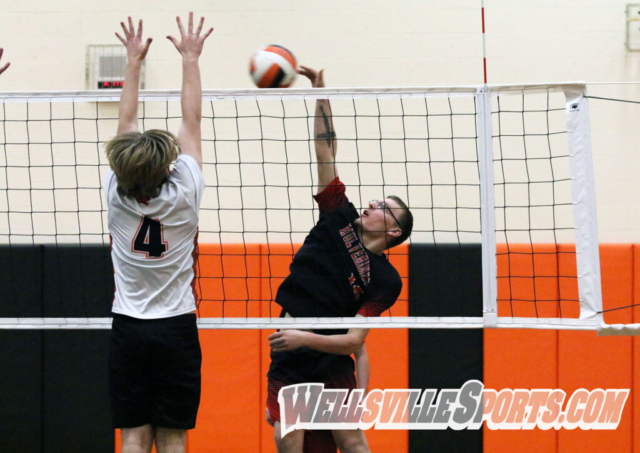 CUBA — It’s been one of the hardest battles that defending League Champion Cuba-Rushford has had to face this season. For the final time in regular season play on Thursday, the Rebels were looking to bring out the brooms against the newest arrivals in Allegany-Limestone to maintain their position at the top of the leaderboard.

After each team split the first two sets of the match, it was anyone’s game in what would be the last two sets of the night. Luckily for the hosts in blue and white, they had just enough firepower in the arsenal to deliver the victory in the Wighthouse, as they swept the Gators in the season with a four-set, 25-14, 10-25, 25-22, 25-21 triumph.

“Overall, this was a really hard-fought match. Allegany-Limestone is a very, very good team, so I’m happy that we were able to get the win by playing incredibly hard,” said Rebels coach Nick Perillo.

The Rebels (9-1) were led by Max Hinckley on the attack, fueling the efforts with his nine team-high kills. Maddox Keller helped the cause with three big blocks at the front of the net to go with two kills, while setter Allen Fuller handed out 18 assists to couple alongside six aces from the service line, and three more kills.

Cuba-Rushford will look to become the first team to 10 wins this season when they return to action on Wednesday with a 6 p.m. visit to the Lions of Wellsville.

BELMONT — After a close fight with the Eagles of Fillmore right out of the gate, host Genesee Valley/Belfast settled in shortly after to deliver a big punch in the night’s second set, using the momentum to end their nights on the strongest of notes with a straight-set sweep of their opposition by a 25-20, 25-13, 25-19 count on Thursday.

Canaan Sullivan and Sean Mahon fronted a strong showing of offense to pace Genesee Valley/Belfast (4-6), as Sullivan led the brigade with his 12 game-high kills, while Mahon followed with nine more behind him. Setter Dominic Marra handed out a whopping 22 assists to help further the team’s cause on offense, pairing them with two more kills of his own.

Both teams are back in action at 6 p.m. on Tuesday after the Martin Luther King Jr. holiday, as Genesee Valley/Belfast pays a visit to Arkport/Canaseraga, while Fillmore heads back home to host Bolivar-Richburg.

BOLIVAR — With the end of the regular season rapidly approaching for the grapplers on the mat, teams will need everything they can muster in order to

Bolivar-Richburg was tasked with quite possibly one of their toughest challenges of the season from a team just 15 minutes down the road — the Portville Panthers. On Thursday, the visitors from across town rode a big wave of momentum behind numerous forfeitures through the middleweight division, adding to their lead with a pair of wins in competition to take a 27-12 lead.

But the advantage held by the Panthers would not hold for much longer, as Bolivar-Richburg found their groove to close out the night, recording five of the last six wins, three of them by Caden Allen, Trent Sibble and Gary McDowell on the mat, helping them pull ahead of their opposition with a 41-33 comeback victory.

The match would begin on a positive note for the Wolverines at 132 pounds, as Trey Buchholz garnered the first of four match victories via pinfall — his coming during the second period against Parker Dornan, nearly a minute in. A slew of forfeits then followed, with Portville being awarded three of the next four matches before Tavyn MacDonell became victorious with one of his own at 160 pounds.

Two more Portville wins were discovered at 172 and 189 pounds, which saw Jake Ziegler and Bolivar-Richburg’s Zach Mitchell battle hard from start to finish in their match at 172 pounds. 23 combined points were scored by the two competitors through the battle, as Ziegler edged out Mitchell for the 13-10 decision win.

The Wolverines would then shake it off and piece together a strong conclusion to the match, as they recorded five straight wins led by Caden Allen and Trent Sibble in the heavyweight division, each garnering pinfall wins of 3:10 and 1:37 at 215, and 285 pounds respectively.

To further the team’s cause, James Gleason (102 pounds) and Teegan Sibble (110 pounds) added the last two forfeit wins for the hosts before Gary McDowell was able to seal the comeback win for good with his pinfall win at 118 pounds, battling hard with Portville’s Mekhi Muhyee to grab the pinfall win with nearly a minute left in the final period.

Bolivar-Richburg is back on the mat Tuesday night downstairs, as they host the Alfred-Almond Eagles in a 6:15 p.m. bout.

Thank you for fifty years of Confer Plastics