Home » Wellsville wrestling off to 8-0 start, win at Bolivar-Richburg and Arkport duals (photos and story)

Wellsville wrestling off to 8-0 start, win at Bolivar-Richburg and Arkport duals (photos and story)

BOLIVAR — Although it has been nearly two weeks since the beginning of a brand new wrestling season, some early stakes have already reached new heights. Two teams that have begun their season on the right foot, met at one place and at one time for their only head-to-head matchup this season on a quiet Tuesday night around the area.

Wellsville and Bolivar-Richburg. The local rivalry re-imagined once again for another battle on the mat.

The bleachers inside the upper gym were filled to the brim. The noise level: Loud. There was plenty of excitement. As for the match itself? — A thrill ride right down to the wire. Through the early stages, a solid beginning was compiled by the Wolverines. One that was later plagued by numerous forfeits through the middleweight classes.

Something that Wellsville would gain tremendously to overtake their opposition at the top of the high-wire act of the evening. Both teams were separated by just three points with three matches left as the action entered its final stage — the heavyweight division. As the curtain began to descend onto the stage of local grandeur, the last chance to make the ultimate curtain call soon followed.

In the 189 pound bout, Shane Davidson would answer for the Lions.

In a scrappy tussle alongside Bolivar-Richburg’s Caden Allen, the Wellsville senior would go on to record perhaps the five biggest points of his season to date, as he took complete advantage of the team’s destiny until the end, helping score three big points on top of their sixth and final forfeit win at 215 pounds — a nine-point swing altogether that allowed the Lions to catapult ahead of the Wolverines and towards their biggest win of the season by a 39-33 count to push towards an 8-0 start.

“We’d like to win some more matches on the mat, but we know after stepping into this gym, we had to go up against a team that is more than capable of winning Sectional titles,” said Lions coach Tyler Carman. “Kudos to Bolivar for a great match, they have a great program and we were lucky to find some gaps to score some big points. We had some matches that went against us that were tough. But the guys showed up, we hung tough, their academics are excellent. Everyone was here, so we are all proud of what we accomplished tonight.”

Scattered across the match, Wellsville at some point would receive all 36 points they automatically earned off six Bolivar-Richburg forfeits. But to grab them, they would have to navigate their way through a start that saw Bolivar-Richburg net four of the matches first five wins to get the ball rolling.

Among those victories: an incredible performance from Teegan Sibble at 110 pounds for the Wolverines.

In a close battle alongside one of Wellsville’s senior leaders — Jayden Acker, Sibble would have to act swiftly and defiantly. With under 10 seconds left in the second period, she would do just that, garnering just enough room under the grasp of Acker to flip the switch on an incredible fireman’s carry reversal, laying her opposition straight down onto the mat to record the pinfall victory a short time later.

An incredible upset that Wolverines coach Andrew Taylor says will be one of many highlights, as her wrestling career continues on.

“They all wrestled well including Teegan. She was outstanding in her match with that huge upset win. That was a tight battle all the way through, but she held her own and what a change of events for the match to start things out,” he said. “She’s tough. No one should underestimate her. She’s here for the long haul.”

An 18-0 lead for the Wolverines was collected in the first three matches beginning at 102 pounds. Sandwiched in between Sibble’s win, were victories from James Gleason and Gary McDowell (118 pounds), as both grapplers recorded a bounty of points with numerous near-falls and takedowns before they each managed to record the pinfall victory. McDowell’s pin was the quickest of the night, as he pinned Adam Iantorno in 1:43 to capture the win.

After Wellsville got on the board with their first forfeit from Hayden Cunningham at 126 pounds, the Wolverines would grab a little piece of history along the way a match later at 132 pounds.

Trey Buchholz would dig into perhaps one of the most competitive battles on the mat against Wellsville’s Jack Cicirello. Multiple reversals and near-fall points were garnered, the vast majority by Buchholz, as he garnered just enough of an edge down the stretch to record a massive 9-3 decision win — a victory that would become his 100th of his career.

“Trey’s been here, and he’s put in all the hard work and dedication over the years to earn what he’s had to earn,” Taylor said. “He did what he had to do tonight to secure this big accomplishment, especially when we have one more year to go with him. He’s only a junior, and he’s still going to do some more damage. This year, it’s more about focusing on the individual aspect of things rather than the team, because of our struggle with numbers this year. But everyone we wrestle, it’s going to be a battle. Tonight was no different.”

After Buchholz’s historic triumph, the momentum began to shift from one side of the mat to the other. Four straight forfeit wins from 138 pounds to 160 pounds went in favor of the Lions, as Brayden Riley, Landon Stratton, Matt Ritter and Evan Buchholz were all credited with the forfeit wins to tilt the pendulum in favor of a 30-21 lead, after originally trailing 21-6.

With a potential tide-turning match at 172 pounds, Tavyn MacDonell would deliver a huge win for the Wolverines to get them back to within a stone’s throw of Wellsville. Through a tight 2-1 battle in the first two minute period, MacDonell clawed deep and came away with a massive reversal against Xander Outman, en route to a pinfall win at the three minute mark to close the gap.

All of a sudden, a 30-27 match with three bouts left to be decided. The stakes have never been higher than before.

At 189 pounds, one of two things was going to be the end result: The momentum re-garnered by the Wolverines would march on, or the Lions would erase it all in favor of an official match-clinching victory.

For Davidson, the latter was chosen. In his bout against Bolivar-Richburg’s Caden Allen, the Wellsville senior would go forth to record the five biggest points of the night, using a huge takedown and near fall of Allen during the first two rounds to his advantage, holding on for the 5-1 decision victory.

“He did a great job,” Carman said of Davidson. “What’s more important is the type of leader that Shane is off the mat and in the classroom. To be able to rely on him and get wins like this that we can count on every night, it’s huge. That’s what great wrestling programs feed off of. This was a big win for our program. There haven’t been a whole lot of times where we have been able to take them down either. To do it here is a bonus, but now we have to dial it back a little bit and get healthy so we can be ready for a big rush coming up after Christmas. That’s where it really counts.”

The win would also begin what would be a nine-point swing for the Lions to end the night, with additional help being collected from a 215 pound forfeit win for Blake Cranmer, officially putting the match on lock with a 12-point lead entering what would be a Trent Sibble pinfall win at 285 pounds over Gabe Black to close out the evening.

“The kids came and performed,” Taylor said. “They knew what they had to do to win. Giving up 36 points worth of forfeits is a killer. I told them they had to work for it, work for a pin and those points, and if not, win the match. 189 was a big match for Wellsville, and it was a great head-to-head matchup as far as Sectionals is concerned, seeding wise.

Both teams will resume regular season play after the upcoming weekend, next Tuesday night, as Wellsville heads back home to take on another powerhouse — Canisteo-Greenwood, beginning at 6 p.m, while Bolivar-Richburg looks to regroup on the road at Arkport/Canaseraga in a 6:15 p.m. bout of their own. 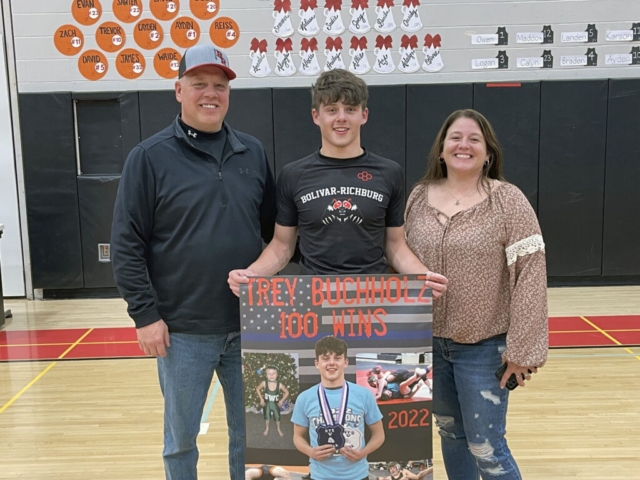 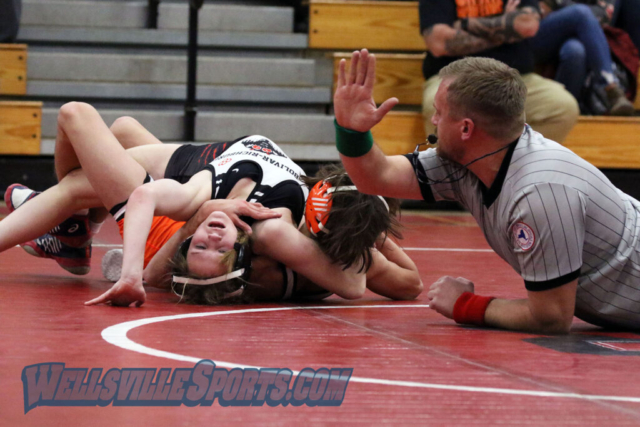 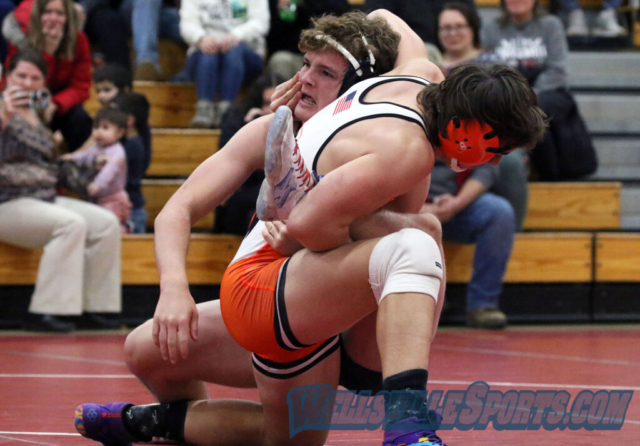 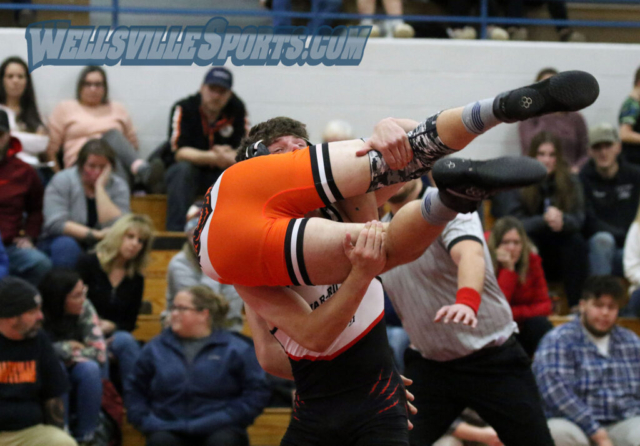 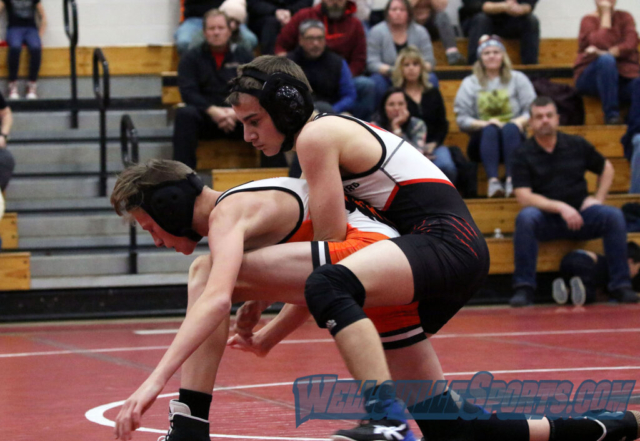 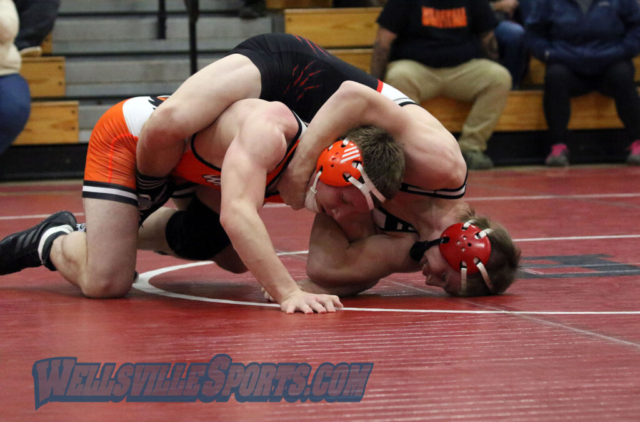 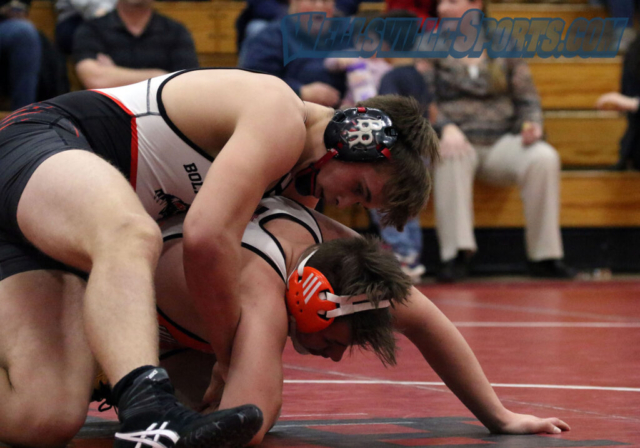 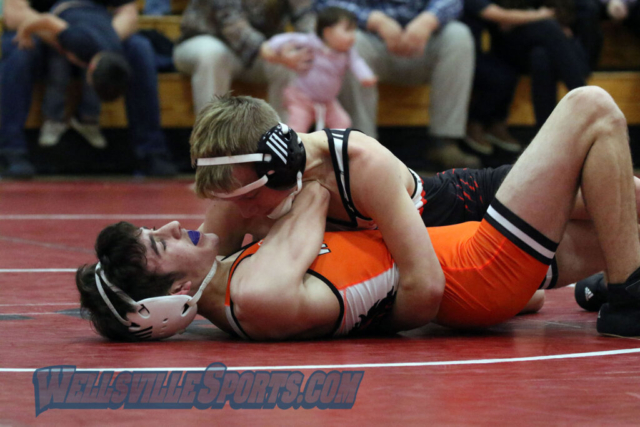 Exploring the Western NY Wilds: A snake for all seasons