SCIO — It’s that time of the year again in Allegany County.

The Scio Christmas Tournament has officially kicked into full gear on Thursday, with four ladies squads — Cuba-Rushford, Houghton Academy, Hinsdale and host Friendship/Scio, battling it out for all of the holiday glory.

Up first: The Lady Rebels and Lady Panthers, in a formidable battle that saw two of the County’s best — Taylor Searle and Jessica Prentice, duke it out from start. Out of the 102 points scored between both teams, they would combine for 62 of them.

A true neck-and-neck battle until the end. But when the window of opportunity opened up, it would become a big difference maker.

No advantage would ever eclipse two possessions through a good portion of time spent on the hardwood between both teams. That was until the final eight minutes of play, when the Lady Rebels punched down on the gas and never let up, with Searle leading the way towards jump-starting a run that would see as many as 12 points being scored consecutively to give Cuba-Rushford all the room they needed to run away with a 58-44 win over Houghton Academy.

“The fourth quarter was big,” said Lady Rebels coach Aaron Wight. “We were finally able to get some stops defensively, and we hit some big shots on the other end. This was the first time this group faced a physical, tough team like this, and they really responded and buckled down. Emma (Retz) hit some big shots for us, and Taylor really got us going in the second half.”

Through the majority of time spent in the first half, both Cuba-Rushford (2-3) and Houghton Academy went back and forth down the court, with each team garnering an advantage after both quarters — the Lady Rebels with a 17-13 lead after the first eight, and then a strong response by the Lady Panthers in the next frame that saw the game navigate its way towards a 27-all tie at the break.

With even playing ground going into the second half, the tempo of the game would remain unchanged.

Another back-and-forth trading of points would occur to open the second half, coming from within a third quarter that saw the Lady Rebels attempt to break free from Houghton Academy’s (0-3) grasp early, but with the help of Prentice, the Lady Panthers were able to climb right back to within reach and then some, to take a one-point lead going into the last eight minutes.

If there was ever a time to create a defining moment in the game, the fourth quarter was it. For Cuba-Rushford, they would not squander that chance. Behind the guidance of Searle, they would find a way to capitalize on all fronts — offense, defense, even special teams to hold Houghton Academy at a complete standstill, using a game-winning 19-4 run to close out the night. A run that saw the Lady Rebels score 12 straight points to break free from the Lady Panthers and towards victory, along with a spot in this weekend’s Championship round once again.

Searle would conclude her night with a season-high 30 points for Cuba-Rushford. Emma Retz provided a solid contribution along the way, as she hit three big treys in the first quarter to help get the action started, putting it towards a 16-point effort. Brynn Lavery had six points.

On the other side, Jessica Prentice finished with a game-high 32-point performance to pace the Lady Panthers offense. Jessica Adenuga had 10 points.

In the tournament’s nightcap, the Lady Bobcats of Hinsdale and host Friendship/Scio would close it out in a game that featured some slow beginnings. Once the temperature continued to rise, it would soon see an engulfment of flames.

Friendship/Scio was responsible for it, as they carried a first half lead into the locker room. Upon their return to the court, they would pick up right where they left off, shoveling more coal into the steam engine, allowing them to produce a titanic 26-point third quarter to hold the Lady Bobcats down. The lead for the hosts would grow exponentially larger in a hurry, enough for them to record what would be their first ever berth into the Championship game of their Christmas Tournament in what was a 55-26 victory.

“Our third quarter has been our best quarter this season, and tonight was proof of that,” said Friendship/Scio coach Ashleigh Lewis. “We turned it up a bit in the second half with some great presses, and then they let it loose. This was a great way to build off the tough loss in Mount Morris. We got some confidence back, and I was really pleased with our overall play to get that back. We were very unselfish with the ball. The girls really took to heart what we talked about in practice earlier this week. All in all, this was a great thing to see.”

Before the epic engulfment surrounded the third quarter for Friendship/Scio (2-1), they would have to work their way through and alongside Hinsdale in the opening half, where they were able to overcome some pressure from the Lady Bobcats in the first quarter to take a 12-8 lead. The advantage was held across a scoreless timespan in the first three minutes of the second, until a long three-pointer from Hinsdale cut their deficit down to a point.

With the Lady Bobcats now right on their coattails, Friendship/Scio began to kick it into high gear to close out the half, ending with six of the last eight points — four of those coming off back-to-back breakaway lay-ups from Nevaeh and Morghyn Ross off a pair of Hinsdale (0-3) turnovers.

The buckets would help the defense ignite an inextinguishable fire upon their return to the court for the second half, as the hosts in white would connect on all fronts in the offensive zone to begin their isolation away from the Lady Bobcats with a gigantic 26-6 third quarter run that would keep them in control permanently.

Three different scorers eclipsed double figures to lead the Friendship/Scio offense, with Nevaeh Ross and her game-high 17 points charging the efforts, adding in 10 rebounds along with five assists to complete her double-double. Kadence Donohue chipped in with 13 points and eight rebounds, while Morghyn Ross collected 11 more points and grabbed eight additional rebounds.

As a complete unit, Friendship/Scio garnered 12 assists on 22 total field goals, and grabbed a whopping 30 rebounds off the glass.

For Hinsdale, Sarah Tuttle and Kaleigh Buckles led the scoring with six team-high points each. Hannah Sutton and Jaylee Jimerson both followed with four points.

On Saturday, the Scio Christmas Tournament will reach its conclusion beginning at 6 p.m. with the Consolation round, as Houghton Academy and Hinsdale do battle to kick off the night. Later on — the Championship, as Cuba-Rushford and Friendship/Scio go toe-to-toe for the right to become this year’s Championships, at 7:30 p.m.

WELLSVILLE — After splitting their first two meets of the season over the road, the Wellsville Lions marked their return home on Thursday to open their first meet in front of their crown with the Campbell-Savona Panthers in town for a swim.

It was a meet where the Lions were able to build a strong start in the first half, and then, provide an even stronger finish to round out the night, as the team collected nine top finishes in all, two each from both JT Mariotti and Ethan Everett to fuel up a successful home debut in the water with a 106-64 rout of the Panthers.

Both Mariotti and Everett had one top finish in each half of the meet to propel Wellsville (2-1) towards success, with Mariotti scoring triumphant finishes in the 200 freestyle and later, in the 100 backstroke, while Everett followed up with wins in the 50 freestyle and a winning time in the 100 butterfly to start a second half that saw the hosts record six of the final seven events in the win column.

Wellsville would also record a complete sweep of all three relay events — the 200 medley, the 200 freestyle and 400 freestyle to keep the spark ignited.

The remaining individual winners for the Lions include Ethan Crandell in the 500 freestyle and Ben Jordan in the 100 breaststroke.

The Lions are back in the water on Saturday with a 10 a.m. road trip to Alfred University to take on Hornell.

SHINGLEHOUSE, Pa. — Through the opening stages of their battle in Shinglehouse on Thursday, the Lady Wolverines of Bolivar-Richburg and host Oswayo Valley were caught in a slow development through the opening eight minute sequence.

Despite that, it was the beginning of enormous things ahead for one team.

Holding the lead after the first quarter, the Lady Green Wave would strike gold upon it, as the offense hit all strides while the defense on the opposite end pitched a second quarter shutout to close out the first half, keeping the momentum maintained in their favor from start to finish in a 34-22 home win.

Oswayo Valley began piling on the momentum right from the start by holding Bolivar-Richburg (2-2) in check for a good chunk of time, while in turn, capitalizing on a lead themselves on the attack. One that they would hold tightly with a burst of momentum going into the next frame of play.

That burst suddenly exploded in the second quarter, and with it, came a massive game-changing run for the hosts in white and green. With a six-point lead in hand to control, the Lady Green Wave attacked on all fronts through the frame to hold the Lady Wolverines without a single point to close out the half — a 14-0 run in all to branch their lead insurmountably enough to take care of business victoriously.

Leading Bolivar-Richburg was Malayna Ayers and Carmen Crowley, who both had a team-high seven points. Nadia Baldwin and Raegan Giardini helped the cause with three points each.

The Lady Wolverines are back home Saturday afternoon for a 1 p.m. tip-off against the Alfred-Almond Lady Eagles.

HINSDALE — Both teams would exchange back-and-forth points through the opening frame of play in Hinsdale, but towards the end and going forward, the Oswayo Valley Green Wave began to find their groove, as they began to stroll ahead with a big second quarter run that they would never look back from, cruising their way towards a 48-22 road win over the Bobcats on Thursday.

Hinsdale (0-4) will return to their home floor Monday night with a 7:30 p.m. tip-off against Houghton Academy. 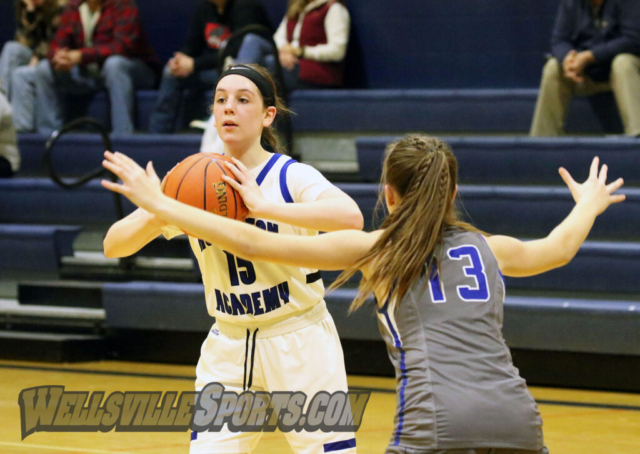 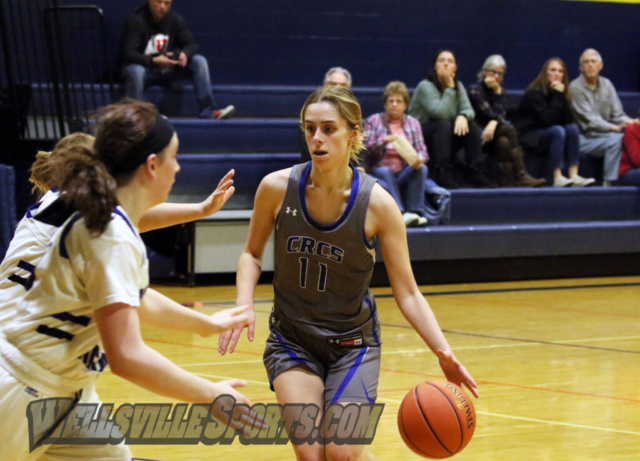 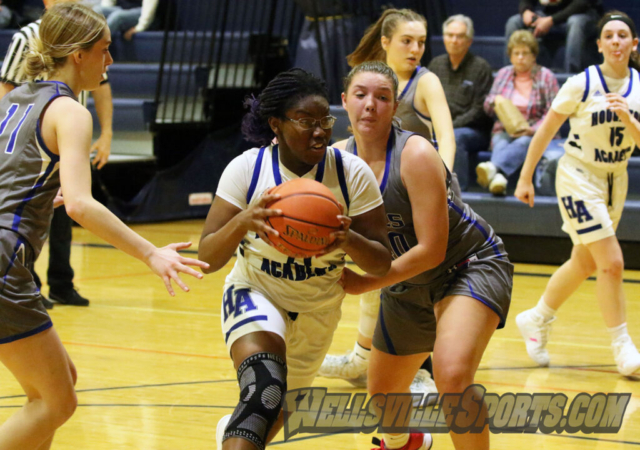 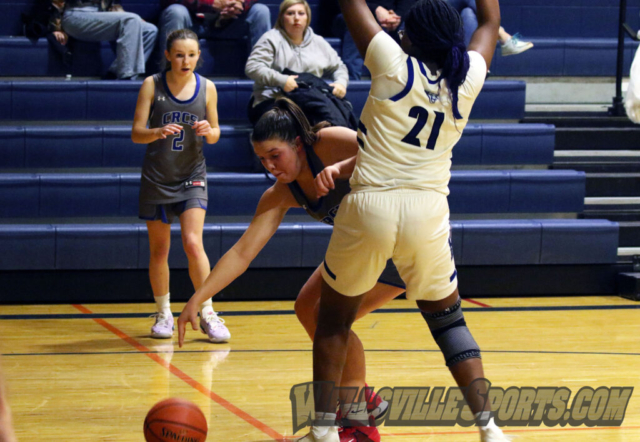 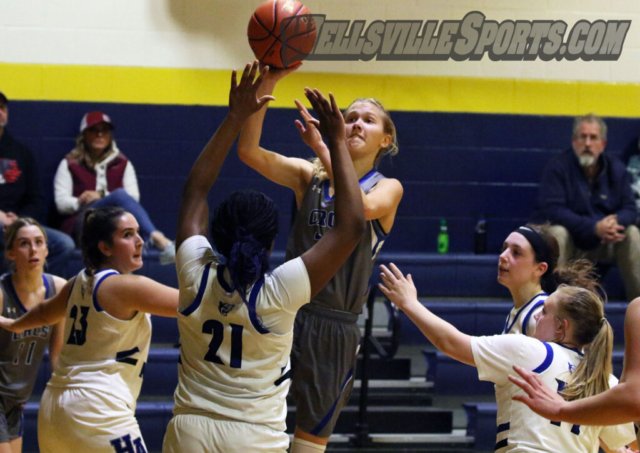 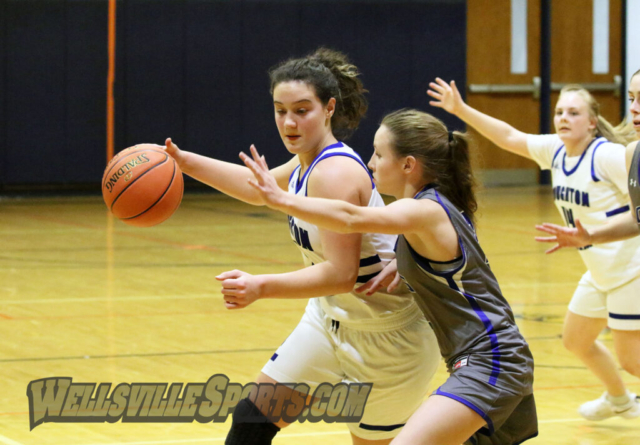 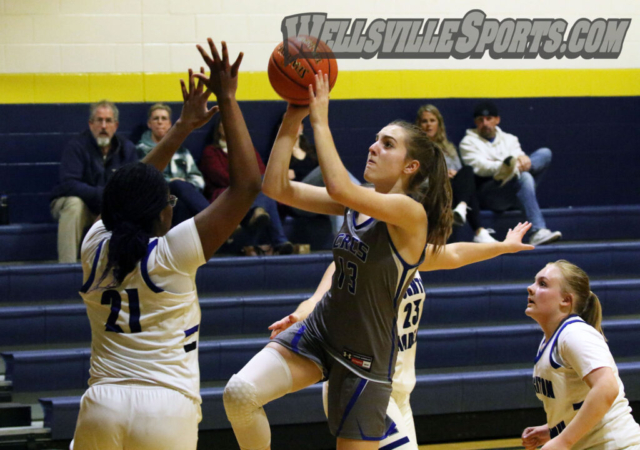 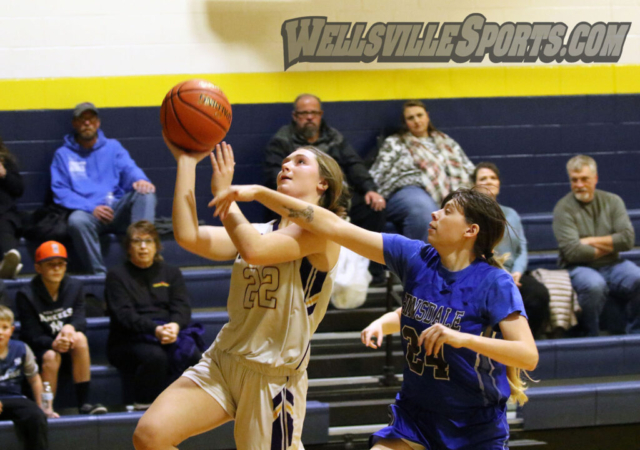 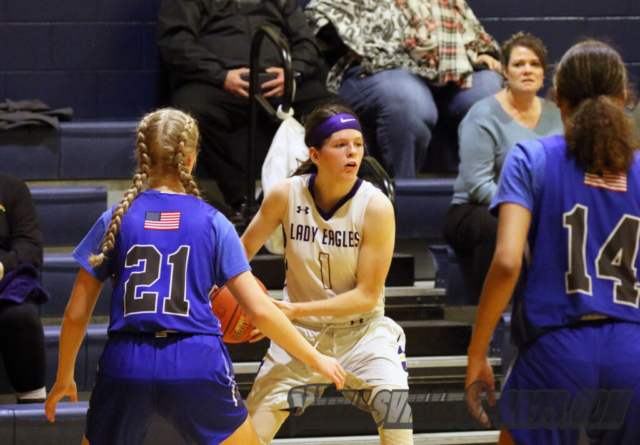 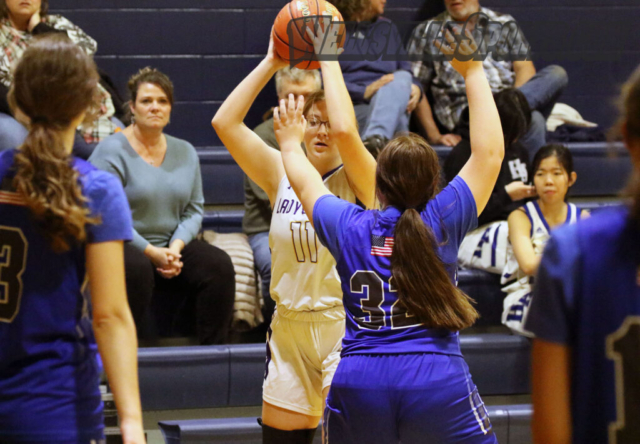 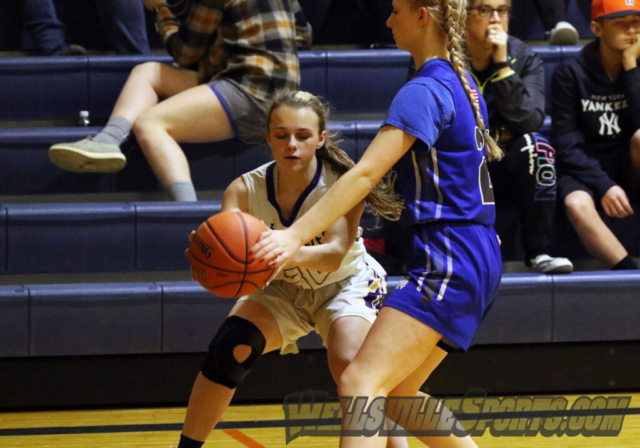 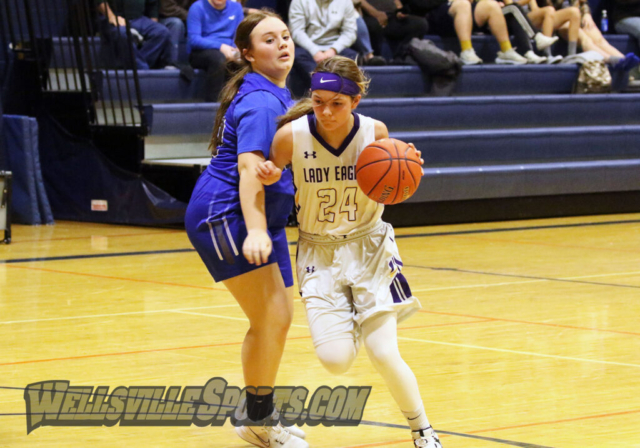 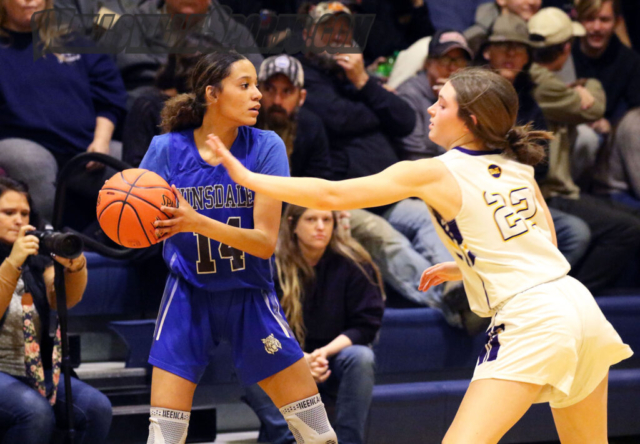 Allegany County Directory of County, Town, and Village Contacts for 2021