WARSAW — On the lengthy ride up north to Warsaw, absolute silence shrouded the inside of the Bolivar-Richburg bus. Not just any kind of silence, but the kind of silence that you would generally observe when one of your biggest games of the season is upon the horizon.

The focus. The determination. The power that it holds, it can prove to be quite the tool to utilize.

Ever since they stepped foot onto the bus, the Wolverines were locked in. Finding themselves one more win away from a chance at glory, long-awaited glory that is, they knew exactly what was at stake: A date with destiny. To do it, they would have to square off with No. 2 Byron-Bergen/Elba in an old western-esque duel between offensive juggernauts — a team that is almost an exact duplicate of the Wolverines themselves.

As you would expect between two of Class C2’s highest-scoring offenses, both teams blazed trails across the field throughout the first 40 minutes of play. The end result — five combined goals, with Bolivar-Richburg firing off the last shot going into the break, and second half with the lead.

For the rest of the game, it was all about defense. In short, the true test of time would begin.

Nothing but fierce battling for possession, physical play and the occasional boiling of some pressure would help set the stage for a thrilling final period. For both teams, there was a ton of bending on both halves of the field, especially for the Bees in the Bolivar-Richburg zone in the last 10 minutes of the game.

Byron-Bergen/Elba had found the right angle to strike from. But how much force would they provide to try and smash the Wolverines defense. With 1:17 left to go in one of the tightest ballgames all season long, they created a break with Colin Martin’s second goal of the game coming at the most crucial time, re-tying the game up for the first time since the waning stages of the first half to ultimately force overtime.

During the brief pause, Zilker had pulled his squad aside and delivered a massive, motivating and emotional message for Wolverines: Finish the job, and rush the stands.

When the two teams re-took the field, it was a completely different ballgame now — 0-0. First to net the lone score, wins.

For the Wolverines, they would take that message from their coach to heart, and lower the momentum that the Bees had created off the clutch game-tying goal from Martin to force the extra session. That would allow them in turn to go back to do what they had done best for a majority of the fight — force mistakes.

On what was their final drive of the night, Bolivar-Richburg would see possession reach the near corner in the Byron-Bergen/Elba zone after a Bees foul was called to set up a direct kick going in on goal.

With Ian Unfus electing to take the kick, the ball went in. After a partial bounce off the turf, it would then continue to work its way towards another Wolverine parked directly in front of the Bees net. After making the No. 2 seeds on defense bend a ton during the second half, a full fracture would finally come into fruition just five minutes in.

The Bolivar-Richburg junior has electrified the attack all season long, and on Wednesday, his record-breaking header finish next to the far post was one that sent shockwaves to the bench and to the cheering section that belonged to their fans in the grandstands across the field, as he helped finish punching a long-awaited ticket to the Class C2 Finals this weekend — a trip that will happen for the first time in program history, after an amazing 4-3 overtime win over Byron-Bergen/Elba.

“I’ll tell you what, you couldn’t ask for anything more differently. Two teams going out, and they fight like this,” Wolverines coach Mike Zilker said. “Would you expect anything less? This showed the tenacity that the boys have when things get tough against a team like Byron-Bergen/Elba. They never gave up, and I could not be any more proud of them. We have continued to preach humble and hungry since day one, and to get this win tonight, is absolutely beyond amazing to me. I can’t believe we did it.”

In a tale of two halves between offense and defense, the prior would make its appearance right away in the opening 40 minute session for both Bolivar-Richburg (15-2-1) and Byron-Bergen/Elba. Out of the seven goals that were scored in the Semifinal, five of them were scored in the opening half, with the Bees jumping on board first with Gianni Ferrara’s jarring of the ball in the middle of a scrum in front of the Wolverines cage, finishing the play with one shot through the thick and thin of it to break the ice 10 minutes in.

Despite giving up their first goal, Bolivar-Richburg would not let it faze them one bit. Right at midway, they responded with the game-tying goal from Noah Little, who capitalized on a phenomenal header pass from Evan Pinney straight over to the other side of the Byron-Bergen/Elba net where he stood, knocking the ball in with a header of his own.

The momentum was erased after the game-opening goal by the Bees, and was now exchanged for momentum of their own going forward, as the Wolverines took their first lead of the game minutes later on a tic-tac-toe play in front of the net led by Pinney, who shifted a fast pass over for a one-time shot from Braden Zilker to find its way in with 13:04 left in the half.

Bolivar-Richburg nearly took a two-goal lead on perhaps their best chance to add some more damage against the Bees, with Reiss Gaines nearly connecting with a header off a perfectly-placed cross from Aydin Sisson after working his way past a pair of defenders in the far corner. But on the next transition down the field, Byron-Bergen/Elba would tie the game at two with 5:57 to go, as Colin Martin scored the first of his two goals after a series of passes in front of the Wolverines cage.

But the final tie of the half would not last long at all, as the Wolverines found their way back on top before time was completely syphoned off the clock, as Landon Barkley pushed the No. 3 seeds into the lead again with his bullet straight off the Bees keeper’s mitts and into the net, with the play stemming off a great pass up the middle from Gaines near midfield with 3:36 to go.

That was a goal that Zilker says gave his team a big boost going into the second half.

“That was huge. We’ve been working on that all season with Landon. He drilled it home with that left foot. You absolutely love to see a play like that all come together when something you worked so hard on improving as the season goes on, really pays off at a time like this. It was a beautiful moment, and it gave us a great boost of momentum for our defense in the second half.”

The Wolverines defense for a vast majority of time in the final half of regulation, was absolutely rock solid, as they continued to apply the pressure against the Bees offense, forcing more turnovers across the middle of the field to take possession into their own hands. While there was a lot of bending, but no further breaking, a complete reversal would occur in what was Byron-Bergen/Elba’s final push of the game in the 10 minutes left remaining.

While the Bolivar-Richburg defense kept applying all of the pressure they could, they were beginning to feel the endgame stage creep closer in the game’s final minutes. But, Byron-Bergen/Elba overcame it all with incredible fervor with 1:17 remaining in their season, as Martin gained possession right at the top of the Wolverines 18, sending the ball straight at the mitts of David Abdo, through them and into the goal while the rain continued to fall.

The goal would tie the game back up at three for the first time since the late stages of the first half, ultimately forcing overtime along the way.

“We talked to the boys at halftime, and we were getting some quality touches in our defensive half from them, and we couldn’t keep letting that happen,” said Zilker. “We couldn’t let the ball hit the ground, we had to tighten up our marks. It was a big deal, and they did. They fought back and got a goal at the very end against us to force overtime. But we didn’t let that bring us down. The heart and drive really came through in the end.”

After the Bees forced extra time off a wild finish, the message that Zilker sent to his team before overtime began, was well received.

Not even five minutes into overtime, the Wolverines would go on to erase all the momentum that the No. 2 seeds would build, establishing ground of their own to create a massive break in the defense with Unfus and his direct kick of complete perfection, taking one critical bounce off the turf before making direct contact with the cranium of Gaines next to the near post, sending the ball past the netminder to send both the Bolivar-Richburg bench and the grandstand into a complete frenzy, as they knocked off the Bees to earn their very first trip to the Finals in program history.

With the goal, Gaines would smash a school record for the boys soccer program, becoming the newest leader in goals in a season, scoring his 27th overall as the game-winner.

“The boys worked together to make that goal happen for Reiss. He’s a finisher, and that’s exactly what he did,” Zilker said. “Ian set it all up in the corner, played his kick on goal and Reiss picked the right moment to score it perfectly. In the process of it, he broke the school record for goals in a season. He’s got 27 now, so for him to get that on this goal, it was absolutely fabulous.”

The goal was one of six shots the Wolverines would record on offense, as they were doubled-up by Byron-Bergen/Elba by a 12-6 count. In goal, David Abdo remained strong behind his nine-save victory.

For the first time ever, Bolivar-Richburg will get their opportunity to go one-on-one for a chance to capture the coveted Class C2 Championship brick. Their time for action will come on Saturday, as they go for it all against top-seeded Red Creek. 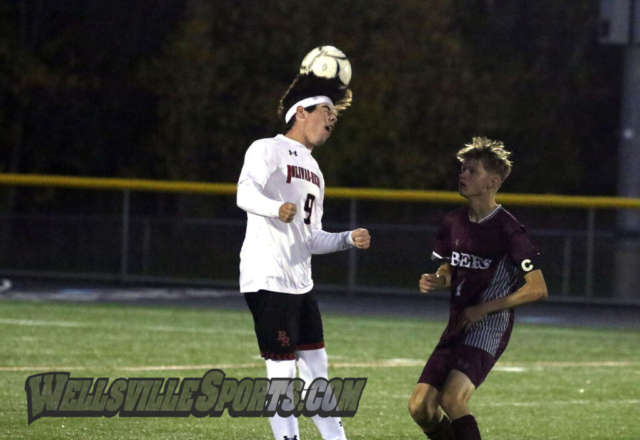 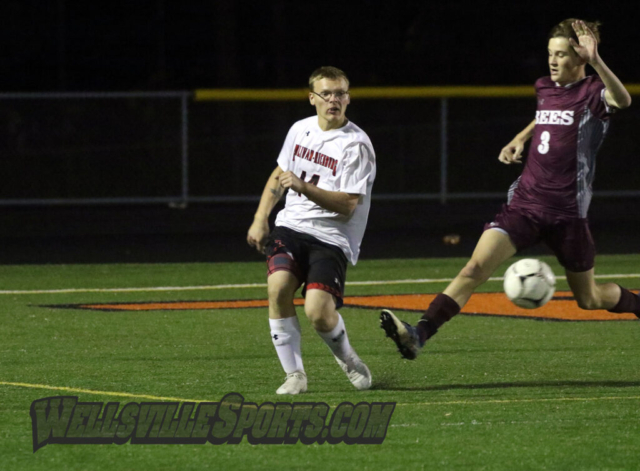 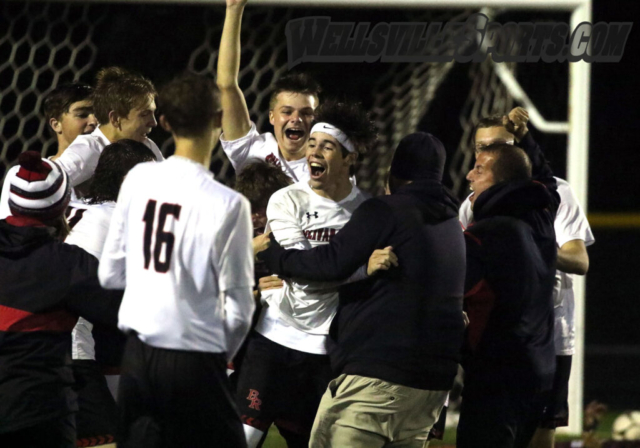 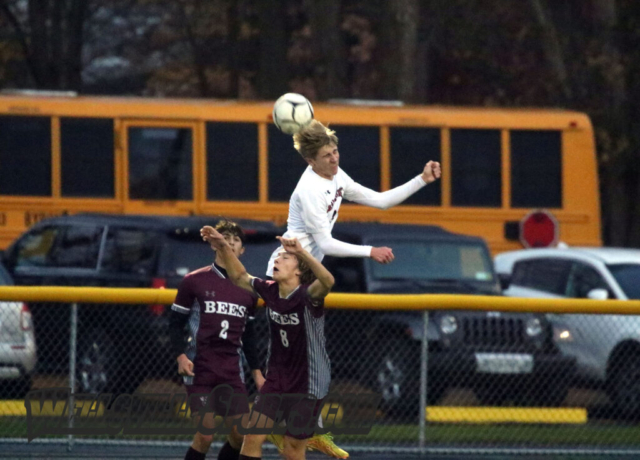 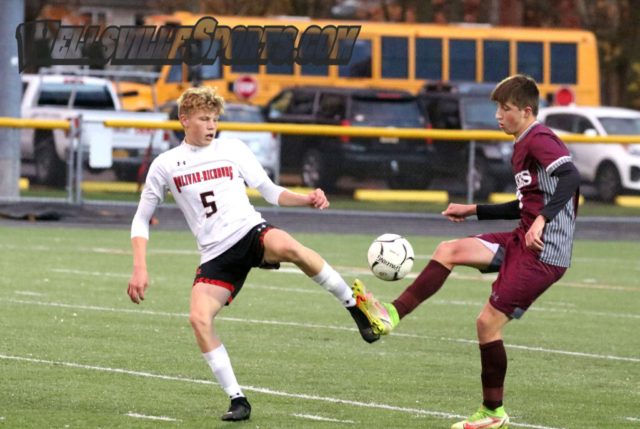 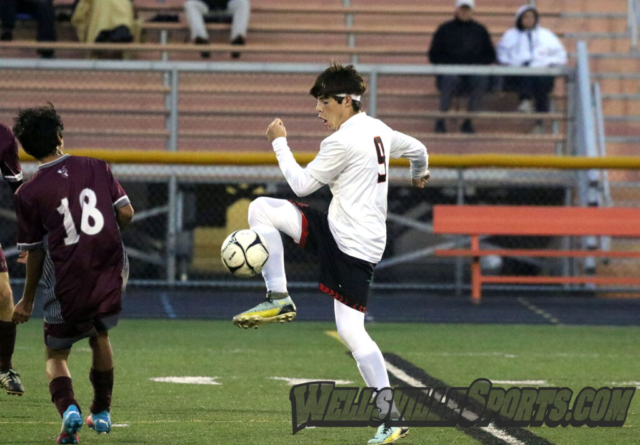 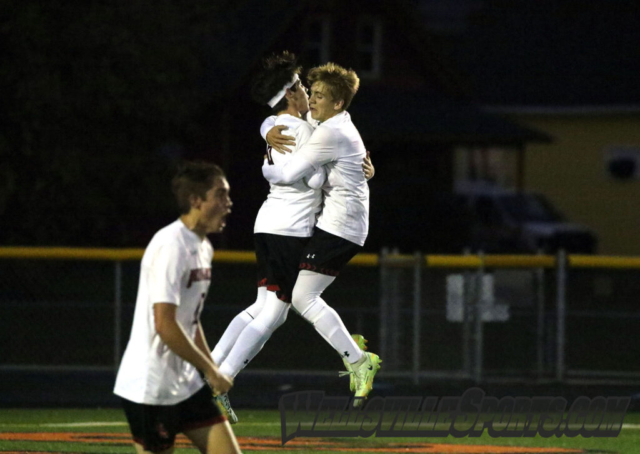 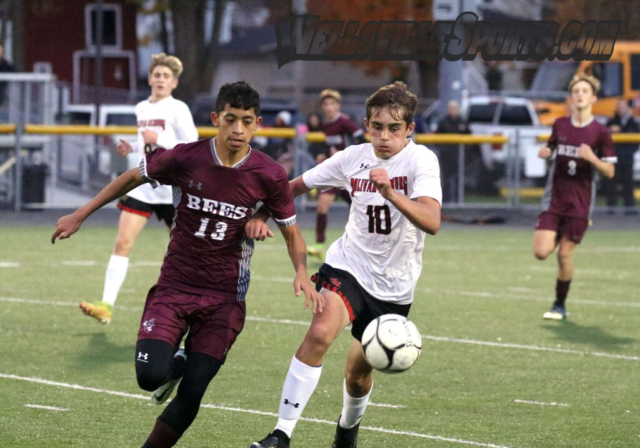 “An Evening with Great-Grampa and/or Great-Gramma,” in Andover on November 16