It was senior night for the Wellsville boys and girls soccer teams on Monday night. Photo by Jenn Lanphier.

WELLSVILLE — The end is near for the Seniors who celebrated their special night on the turf in the Lion’s Den on Monday — one of their last times ever as far as the regular season is concerned, as both teams welcomed in Cuba-Rushford for a Columbus Day, Senior Night doubleheader.

Up first were the ladies, where both teams combined to score five of the six goals in an explosive first half of play. The bulk of those goals were found by the visiting Lady Rebels, who were propelled by both Taylor Searle and Sofia Riquelme, each netting two to help the team towards a dominant first half lead that they kept intact to roll towards a 5-1 road win over Wellsville.

“We finished really well right out of the gate tonight. Cloey (Larabee) played some great balls along to help really get us going on offense, and Sofia and Taylor found their way through the defense and got behind them to make those plays happen. Hopefully this is a win that we can keep using, and roll it into Wednesday back home.” said Lady Rebels coach Aaron Wight.

In a span of nearly 10 minutes, the Lady Rebels (7-6-1) bolted out towards a 3-0 lead of the Lady Lions beginning at the 30:25 mark with Searle’s first goal. After a direct kick out of the zone by Wellsville, it was intercepted at midfield where Searle grabbed a pass from Cloey Larabee in the middle and broke away on goal, sliding the ball underneath Makenna Dunbar in between the posts to collect the icebreaker.

A little over four minutes later, Searle connected with her second from Larabee once more, capitalizing on another Lady Lions (1-13-1) miscue, as Larabee pried the ball free to deliver an absolute strike to Searle deep in the right wing to send the ball up top of the net for a quick lead extension.

Searle would then provide some special teams of her own with her first assist on the first of three Sofia Riquelme goals in the game. With 21:42 left, Riquelme branched the advantage to three after collecting a pass from Searle after her long dribble into the Wellsville zone, grabbing a pass in the left wing and breaking away towards goal to finish it off.

The Lady Lions would not allow the shutout to go on any farther, as they managed to collect their first and lone goal right before the end of the half from Ayla Faulkner, who ripped her shot home off a Makenzie Cowburn corner kick, garnering the rebound in front of the cage to send straight to the top shelf with 10:59 remaining.

The score would remain as such until Riquelme gave Cuba-Rushford their three-goal lead back again with 3:30 left to go, netting her second from a third Larabee assist, breaking loose towards net to bury the ball home next to the far post from the left wing.

After a long second half midfield battle, one more goal from Riquelme finished off the hat trick off of Larabee’s fourth and final assist from midfield. The five goals for the Lady Rebels were accounted for on 15 total shots, as they outshot the Lady Lions by a 15-6 count. Tara Duvall would make five saves in goal to earn the victory for the visitors, while Dunbar made 10 saves.

In the second half, Wellsville struck all chords up and down the field, taking complete control of the Cuba-Rushford defense with five more goals, as Cody Costello and Trenton Green both led the offense with a pair to pace the Lions massive 7-0 Senior Night victory to close out the evening.

“It was a great game from everyone tonight, especially for our seniors on Senior Night. I was really glad to see them all get involved during the game. We were playing much better, and this was a great warmup to help us get ready for Sectionals next week.” said Lions coach Noah Holmok.

Aiden Cowburn had a hand in both Wellsville (6-7-1) goals in the first half of play, giving the team the lead with his hard work near the sidelines by jarring the ball loose from the Rebels defense, jogging into the right wing to provide a cross straight out front where Cody Costello connected with his shot that slowly rolled across the white line and into the net at the 12:41 mark. Cowburn would then score one of his own with 3:38 left to go, working his way around the defense in the corner and squeezed his shot underneath the goalkeeper and in.

The momentum that the Lion had built, would carry over into the second half. And then some.

Five more goals by the offense in black were scored, including a pair in a span of 1:29, as Trenton Green and Cody Costello helped pick the offense up right where they left off, as Green collected his first of two on a Cooper Brockway pass, while Costello scored his second on a long 25-yard dribble in towards the Cuba-Rushford (3-10) goal.

Wellsville would finish off the scoring with three more goals in the last 12 minutes of play, all being scored in another rapid succession, as Green, Logan Dunbar and Kavan O’Grady all scored across the next 2:52. Before scoring his goal, Dunbar split time in the net along with Gavin Haggerty, as they combined to make five saves for the shutout against the Rebels.

It would not take long for the hosts in green to strike while the iron remained hot against the Lady Falcons, as Hope Russell continued her torrid run through the 2022 campaign with both Fillmore goals — upping her season total to 39, catching fire in the opening half to give her team the lead they needed to come away victorious by a 2-0 count.

“Finney did a nice job defensively against us, but our game was a step off tonight,” said Lady Eagles coach Jon Beardsley. “They never threatened us with their offense, but more importantly, we just could not get going ourselves. It challenged our mental makeup today in a different way. We outshot them 22-1, but we couldn’t find a way to open it up. The long weekend and time off was nice, but now it’s time to gear up for Sectionals.”

Russell would begin catching fire across the field for the Lady Eagles (14-0) just three minutes removed from the opening kick at center, collecting a pass on the way into the Lady Falcons zone from Grace Russell to earn the early lead. An early piece of insurance would come later on as time wound down in the half, as Russell connected with her second of the game off a Kylee Ellsworth pass to earn the 2-0 lead at the break.

Although the offense could not keep the gas pedal down, the Lady Eagles would occupy a majority of the second half time in the C.G. Finney zone to keep them out, using the midfield as their top priority, as they allowed just one single shot to head towards Preslee Miller’s direction in net — one that she would grab and clear the zone to record the shutout in goal.

The Lady Eagles totaled 22 shots against C.G. Finney in the entirety of the contest.

Ending the night was the boys squad, who were kept on their feet early by a high-octane Falcons squad in the first 40 minutes, in their first matchup since their Class D State Qualifier game from a season ago. Fillmore would do all they could to overcome some immense pressure put on by their visiting opposition.

With a scoreless tie being glued on the scoreboard for much of the time, the game would come down to a pivotal moment late. A free kick. One that went in the Eagles favor.

With a chance to grab a ginormous lead — the game’s first with minutes remaining, the hosts in black leaned on none other than their Senior Superman: Mitch Ward.

He would not let the opportunity go to waste.

The Fillmore phenom was resilient, as he took full advantage of his free kick at the 75 minute mark, sending it into the C.G. Finney cage to give his team the lead they needed, using it to ward off the Falcons on defense one last time until the final horn sounded to record the 1-0 shutout victory in heroic fashion to give all 12 Seniors a thrilling send-off.

“We were able to improve to 14-0 on the season in an incredibly hard-fought match against C.G. Finney. We had a slow start, but responded well in the second half by playing with heart, physical intensity and determination,” Eagles coach Jarrett Vosburg said. “We exchanged close chances with Finney for the first three quarters of the game, and their keeper came up with some incredible saves. For the final quarter of the game, our intensity led to our best chances and we wound up being the beneficiary of a free kick after sustained pressure. They are a quality team who will give teams a run in Sectionals. Getting this gritty win is huge for us.”

Before the Superman-esque finish by Ward and the Eagles (14-0), they were put on their feet right from the get-go, as C.G. Finney gave the Eagles everything they could handle on defense. Along with the defensive bending, the offense would create chances back the other way — some of their best opportunities at that point, collecting a pair of shots that would ring straight off the post from both Zach Sisson and Layton Sanasith.

In between those chances, another from Brent Zubikowski straight in front of the Falcons net on an indirect kick, one that was lightly tapped by Ward to start it, and then an absolute fireball off the foot of Zubikowski moments later that was stopped by the Falcons netminder to keep it out of harm’s way with under 10 minutes remaining in the half.

The same battle would carry over into the second half between both clubs, but the intensity would pick up for the Eagles against C.G. Finney, especially in the very late stages when they were able to draw a penalty inside the goalkeeper’s box with their build-up of pressure. It would set up a massive free kick chance for Ward with six minutes remaining in regulation.

A shot that he would not let slip by. Without hesitation, Ward eased the ball straight into the Falcons net to give Fillmore the game’s first lead, and ultimately, holding it for good until the horn sounded on their victory. The goal was one of 12 shots the Eagles would have against the Falcons, as they outshot their opposition by a 12-8 count.

Luke Colombo would record all eight saves for the hosts to collect another one of his biggest shutouts on the season.

OLEAN — The Bobcats of Hinsdale made some noise right in the first 40 minutes over the road on Monday, as they used it to set up shop for a big victory — their fourth in the last five games, led by a Preston Jackson hat trick and a three-assist night from Damion Brown in the team’s 6-1 win at Archbishop Walsh.

Out of the six goals that the Bobcats (5-8) found the back of the net with, four of them came in the first half from four different scorers, as Jake Elliott, Robert Childs, Preston Jackson and Xander Pascucci all climbed on the board to deliver the scores. Damion Brown would hand out a pair of assists on the final two tallies to Jackson and Pascucci, while the latter recorded assists of their own to Elliott and Childs, respectively.

The second half scoring would belong to Jackson, as he managed to finish off his hat trick for the Hinsdale offense with two more assists coming from Pascucci — his second, and Brown — his third helper, to end the scoring on the victory. 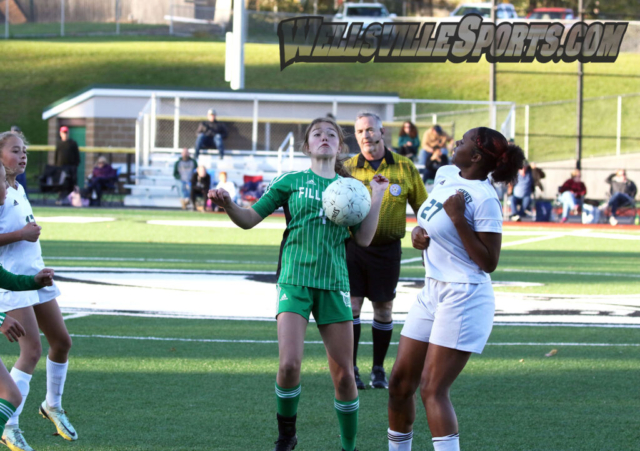 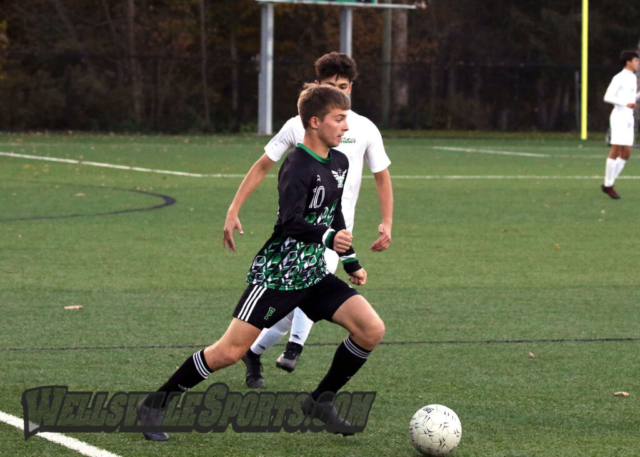 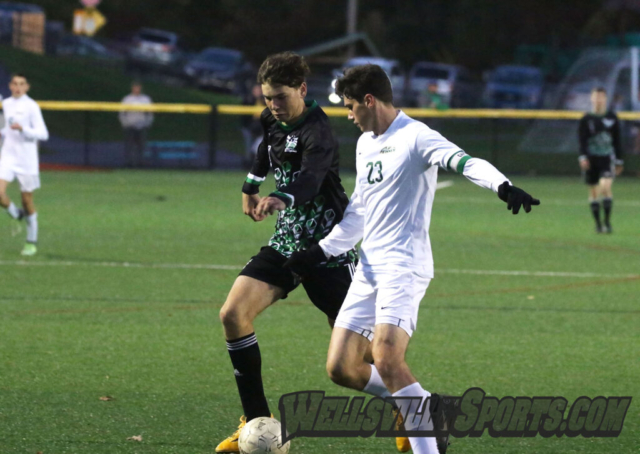 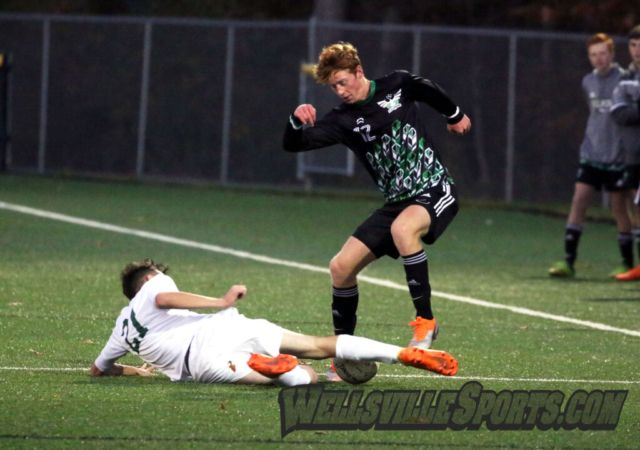 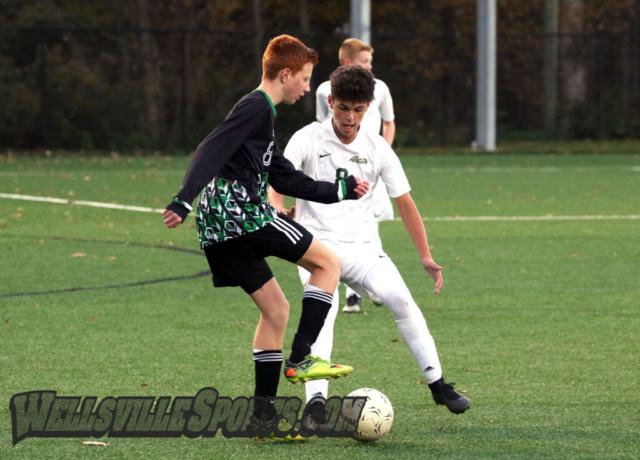 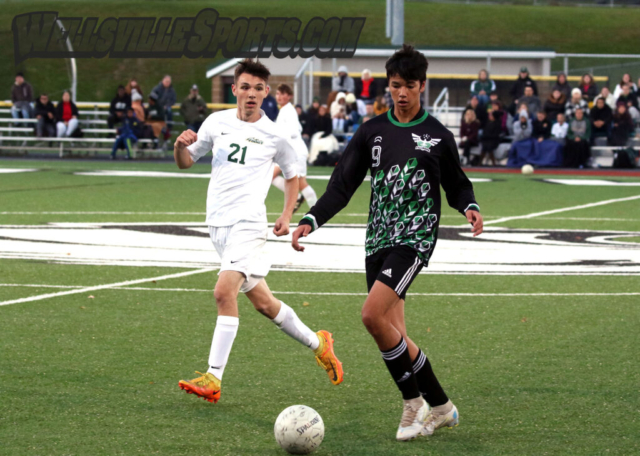 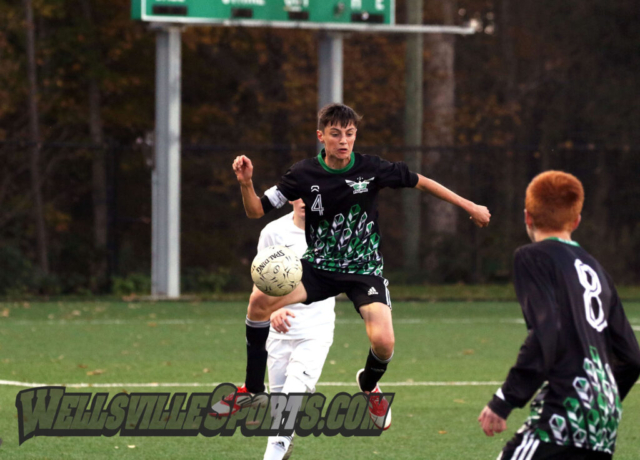 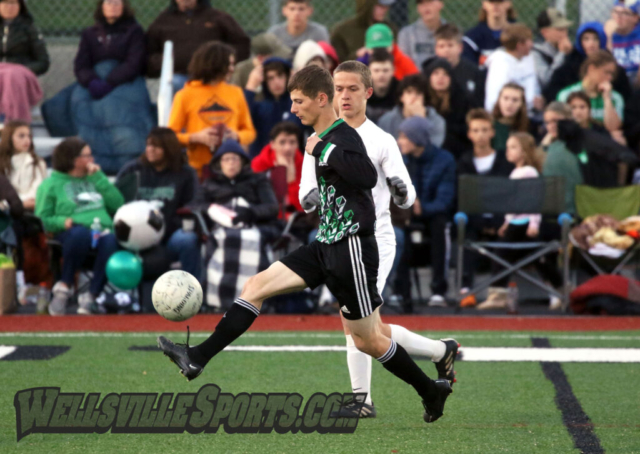 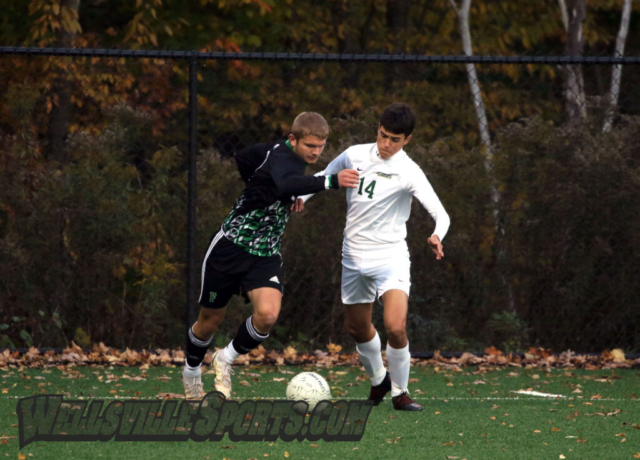 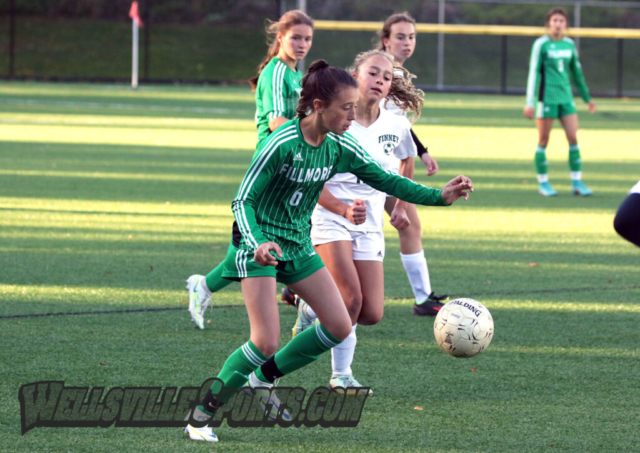 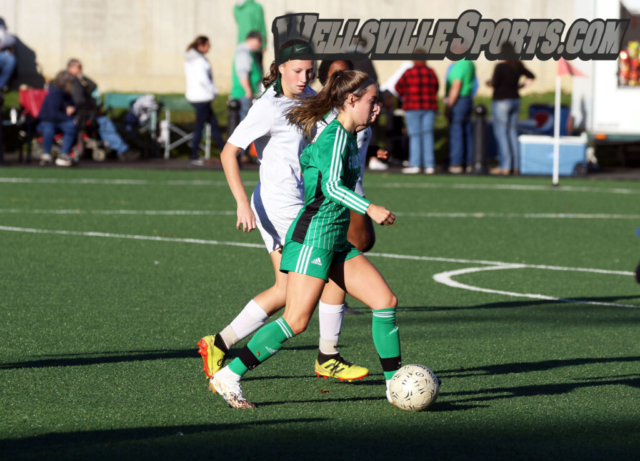 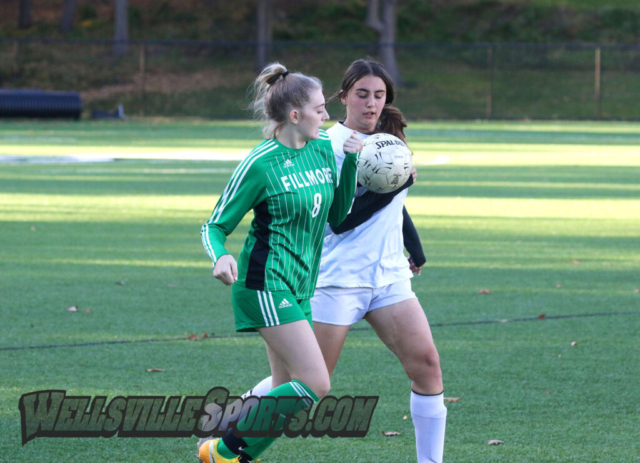 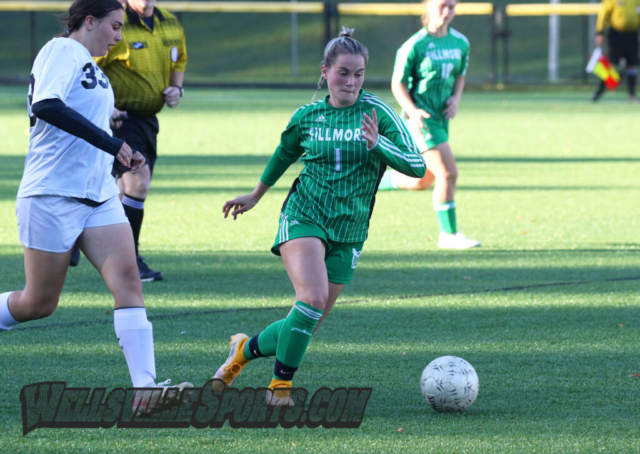 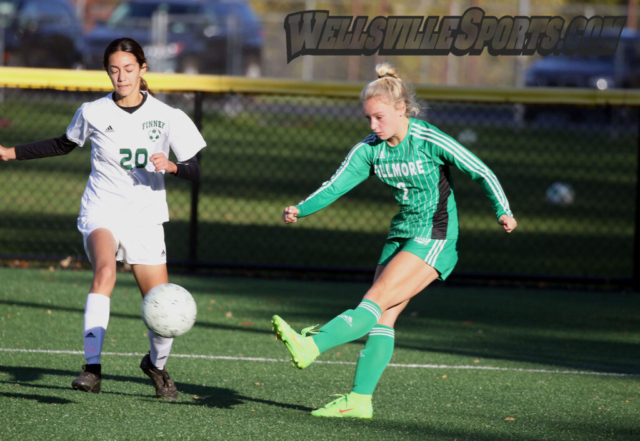 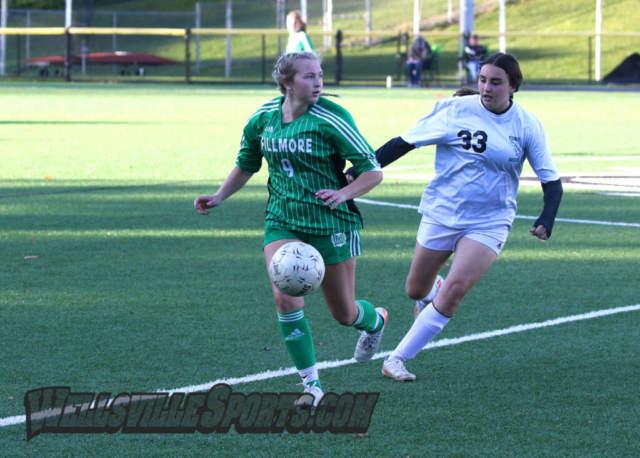 “I went to Africa,” Wellsville’s Harrison Reagan makes an epic speech on his recent trip