BOLIVAR — That once-a-year feeling of fall had officially arrived. Earlier sunsets, trees changing color, the temperature dropping. The telltale signs of autumn are starting to settle in, and it began with the lights being turned on at Dunsmore-Latimer Field on Friday.

Taking the stage was Genesee Valley/Belfast and Bolivar-Richburg in what wound up being a tough, physical battle all across the field. With it — the common theme for their first of two battles this season: Striking fast.

In the opening stages on each half, both squads would connect on a goal, with the latter coming from the Wolverines to tie the game at one, ultimately for the remainder of the game, as the midfield battle would rage on across all 100 minutes of soccer played until there was no more time left to settle the score in what was deemed a 1-1 tie — the first for each team this season.

It would begin almost immediately after the opening kick was taken by Genesee Valley/Belfast (4-3-1). After a drop pass entering the Bolivar-Richburg zone was issued, Sean Mahon would pick it up from the right side of the 20-yardline near the teams benches, sending the ball on a big kick to the far post and into the goal to break the ice in a hurry.

The goal would give Genesee Valley/Belfast a great boost going forward in the first half, holding the Wolverines (8-0-1) down with immense pressure from the defensive front, despite nearly giving up a big opportunity to tie the game before halftime. The hosts in black and red received an indirect kick chance right in front of the visiting cage, but could not capitalize upon it, as it was sent high and out of play.

Bolivar-Richburg, despite being shut down for much of the half, would manage to crack their way onto the board quickly themselves. They would start the second half with a big bang from Reiss Gaines, who dug the ball free from the Genesee Valley/Belfast defense in front of the net, and pounded the game-tying shot in just four minutes.

The tie would hold all the way until the end of time, but not before a couple of prime chances in overtime from each team would develop first. Genesee Valley/Belfast would have the first come on a 2-on-1 rush into the Wolverines zone, led by Evan Turybury who was on the receiving end of the final pass from Tyler Rawleigh, applying a shot that would be stopped by David Abdo.

Almost immediately following the chance, the Wolverines would race back down the field with perhaps their best chance to end the game coming from Aydin Sisson, who sent a long ball straight over Thai Norasethaporn in goal, but on the way in would hit the very middle portion of the crossbar and towards the opposite sideline to avoid any further damage from being applied.

HORNELL — The Lions of Wellsville would do everything in their power to keep host Hornell right where they wanted them. Through what was a scoreless battle in the first half, the action was beginning to shift gears on the way back out onto the field.

That would be a resurgence in offense for the Red Raiders, as they went on a goal-scoring spree by netting all four of their goals in the last 40 minutes of play, two in the last five minutes to help seal up the 4-0 shutout victory at Maple City Park to capture their seventh win in their first eight games.

It would begin in the first 10 minutes after halftime for Hornell off a corner kick deep in the Wellsville (4-6) zone. With Liam Khork electing to take the kick off to the left of the Lions net, he would send it in ever so perfectly to the front where a Wyatt Argentieri header met the ball to send it home for the 1-0 lead.

The second half jettings would continue after a battle with Wellsville across the field for the next 20 minutes. After a short pass up the field from Wyatt Evingham to Shawn Rose, a third and final pass was shifted along to Jack Emo on the right side, scoring his first of two goals to the far right post at the 15:44 mark to add on a piece of crucial insurance.

The Red Raiders would go on to add two more goals in the last five minutes of play to seal the victory for good, with an Argentieri boot in from 30 yards away. As Logan Dunbar was jumping up to make the save, the ball would slip through his grasp and then onto the foot of Mason Terwilliger, who would find the wide open net shortly after with five minutes to go.

Emo would then follow suit with his second of the game two minutes later, picking up a pass from Cody Cardamone on the way in and then, used his legs to weave and shimmy his way past the Lions defense to let a perfect shot to the far right post go into the net to cap off a 27-shot night of offense for the Red Raiders.

Dunbar would conclude the game with 23 saves in between the posts for the Lions.

ANDOVER — With a first half tie needing to be broken, the last response before the half would be the one that provided an enormous spark coming out of halftime.

That would come from Friendship/Scio, who would overcome a 1-0 deficit to host Andover/Whitesville by scoring four unanswered goals, three of them being scored in the last 40 minutes of play to take the lead away and build onto it on Friday with a 4-1 road win in Andover.

Andover/Whitesville (1-8) was the first team to reach the board after nearly 30 minutes of midfield battling, garnering a prime penalty kick chance which CJ Estep would elect to take with 12:48 left in the opening half, capitalizing on it moments later to break the ice. But the lead for the hosts would not hold for much longer, as their visiting opposition changed the complexion of the game beginning with their game-tying goal.

Jerome Harmon, Jordan White and Ethan Davenport all had a helping hand in the four unanswered tallies that Friendship/Scio (2-6) responded Andover/Whitesville with to take the lead away permanently, beginning with a Davenport pass to Harmon to deadlock the game at one on each side with 8:27 remaining until the break.

The first half-ending boost carried into the second half, surviving a back-and-forth midfield battle to find the back of the net on their go-ahead tally from Davenport off a pass from White. Just over 10 minutes later, Davenport would record his second of the game off a Harmon pass to build onto their newly-established lead.

The scoring concluded with 2:42 left to play, as White made a solo rush into the Andover/Whitesville zone to complete his three-point night, and the road win for Friendship/Scio, who took the 16-9 advantage in the shot department.

In goal, Taylor Moore would pick up the victory behind eight saves. Landon Ordway would make 12 saves for Andover/Whitesville.

Stats and a complete box score were not made available to report upon publication. C-R is 0-4. 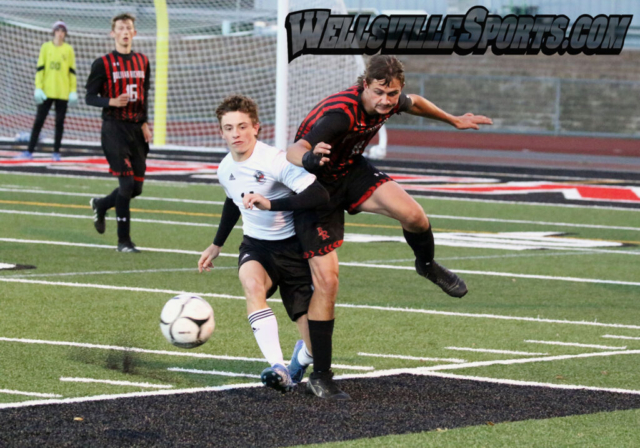 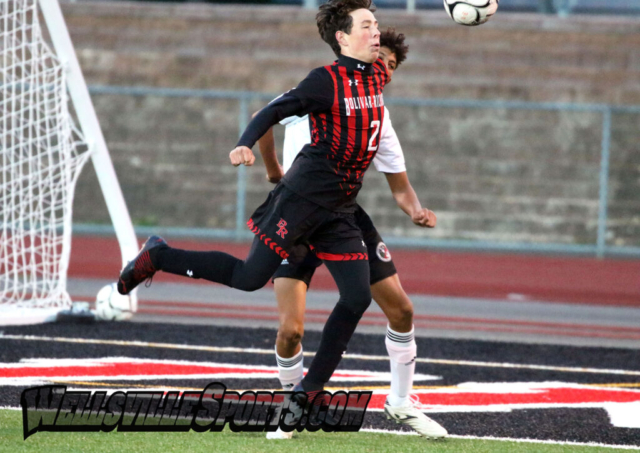 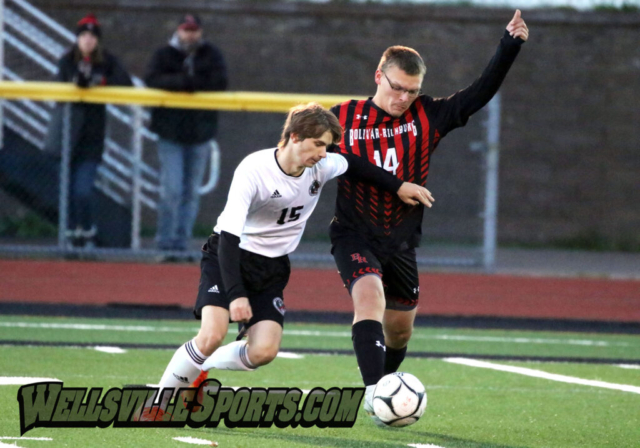 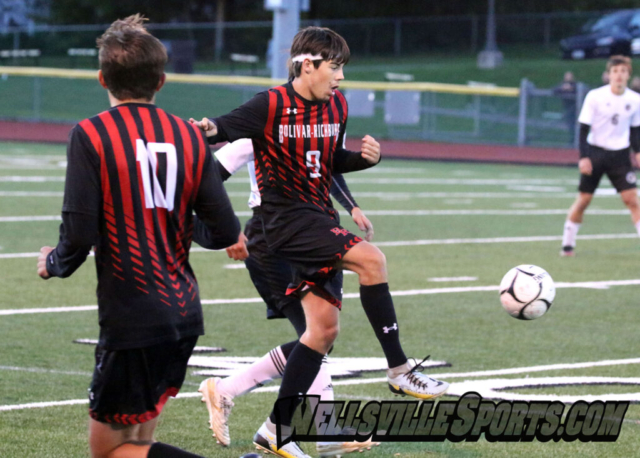 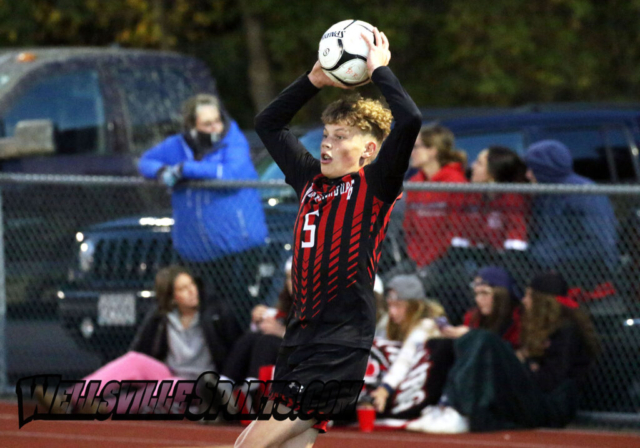 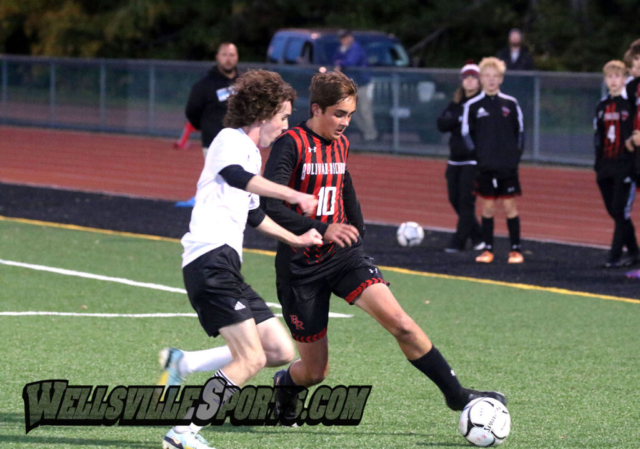