By CHRIS BROOKS, sports editor, wellsvillesports.com and @iambrooksie on Twitter

COHOCTON — One was the magic number on the scoreboard at the Cohocton Sports Complex, Saturday night. And it was a number that benefitted the Wellsville Lions the most, as they were the only one in Consolation round action to find the back of the net, scoring the lone goal to end their weekend on a high note with a 1-0 shutout over Greece Olympia.

The marker for the Lions (2-2) was scored in the late stages of the opening half, where Aiden Cowburn shifted along a pass to Ethan Bailey to take in towards the Greece Olympia goal, putting the finishing touch on the play a short time later. Wellsville would then shift their focus on defense to hold the Spartans at a standstill, as Logan Dunbar was able to complete his shutout in between the posts.

“This was our best game of the season so far. I’m very proud of them for standing tall against a really skilled Greece Olympia team. Monday’s game will be a tough one, but if we can play like we did tonight, it will be a great game against Fillmore.” said Lions coach Noah Holmok.

Wellsville will return to the field back over the road on Monday, as they prepare for a 7 p.m. visit to Fillmore to face the defending Class D State Finalist Eagles.

SCIO — The Bolivar-Richburg Wolverines are off to one of their best starts in recent memory, finding themselves one win away from five straight and a second tournament title. A win over Cuba-Rushford in the Scio Memorial Boys Soccer Tournament title game would propel them to it.

With the lights on and the sun beginning to set, the stage would be as well.

It would be something that Bolivar-Richburg would embrace wholeheartedly right from the get-go, increasing the pressure against the Rebels until it would reach its boiling point to account for not one, nor two or three, but four first half goals to create all the room they would need to push towards the tournament’s grand prize by the end of the night, rolling towards a 5-1 triumph over Cuba-Rushford to remain unbeaten.

“This is one of the best starts that we’ve ever had. The boys are playing well and they are a whole lot of fun to be around,” said Wolverines coach Mike Zilker. “They work really hard and they have that desire to win. We have a great group of boys on all sides of the ball. I am proud of each and every one of them.”

Right from the opening kick at center, the Wolverines (5-0) stomped down on the gas pedal, posting a pair of chances led by Aydin Sisson’s guidance — one by his lonesome, and the other, partnered with Reiss Gaines. Both attempts were stopped by Jack Frank in goal for the Rebels, minutes apart from one another.

But the early cracking would eventually create a break in the ice, as Gaines found the back of the net in the first five minutes off a pass from David Baldwin, which was won at center and sent down the field to set it up. Nearly 10 minutes later, Gaines delivered his second of three in the half, capitalizing on a pressure build-up in front of the Cuba-Rushford (2-2) goal, as a pass straight across the box in front would find his body upon crashing towards the net nearly 10 minutes later.

The advantage would go to three with assistance from Landon Barkley, who set up shop with a big launch from the far corner and into the front of the goal, where a leaping Baldwin met the ball with his head to direct it into the goal for a 3-0 lead. With under seven minutes remaining in the half, Gaines would complete his hat trick after beating out a sliding Frank for the loose ball inside the box, working his way around one additional defender to knock it into the empty net. 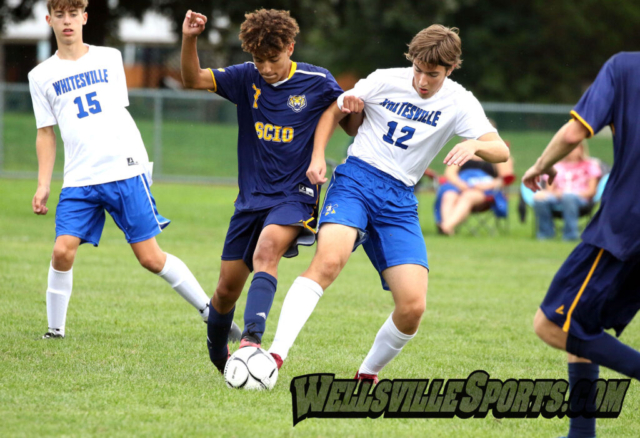 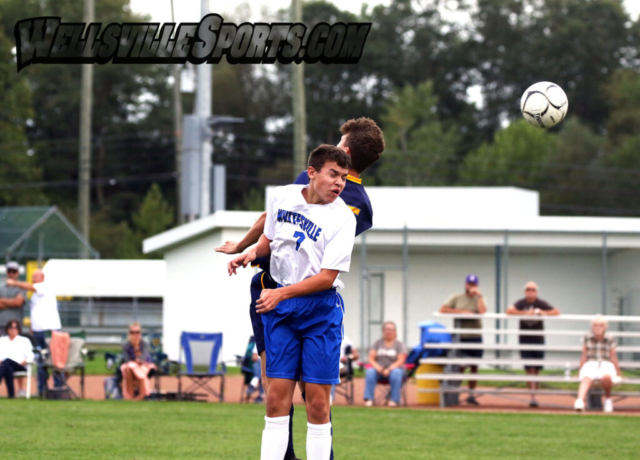 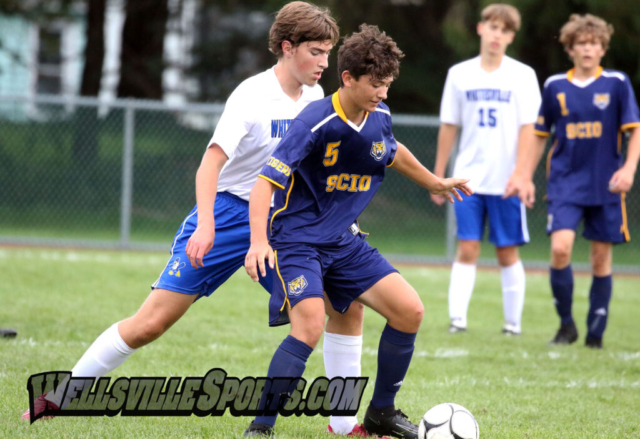 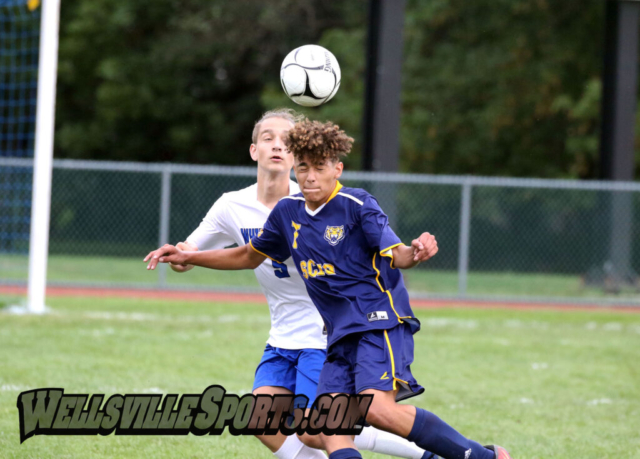 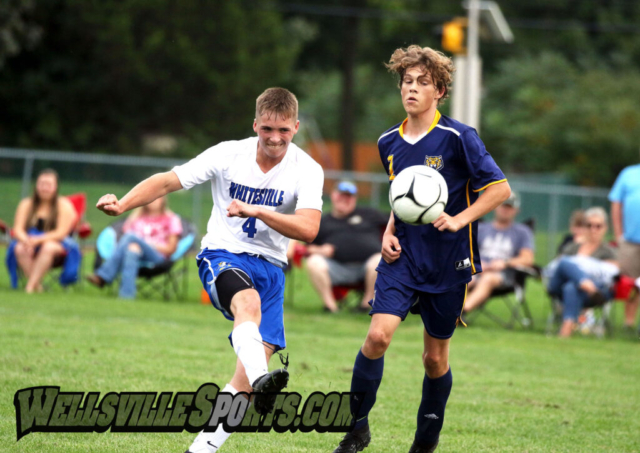 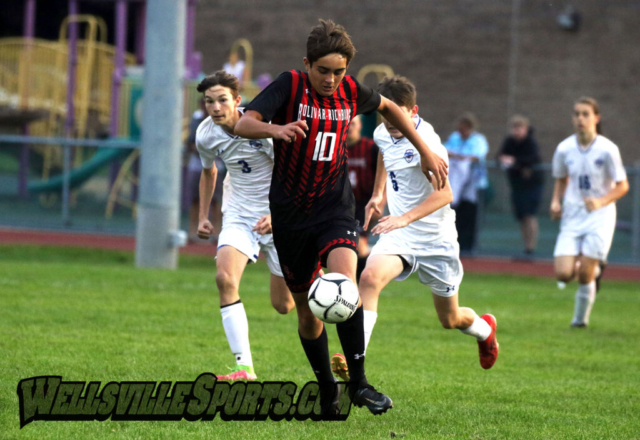 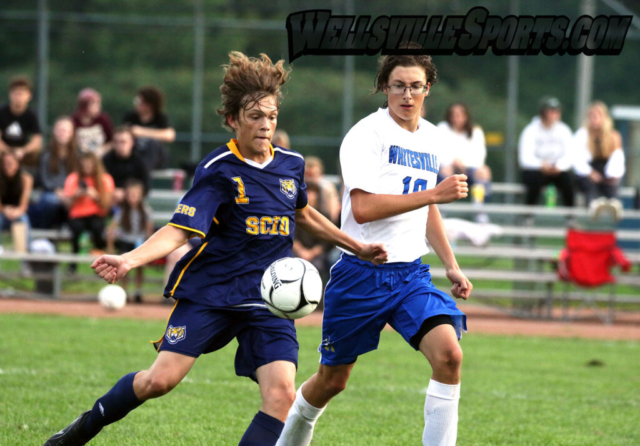 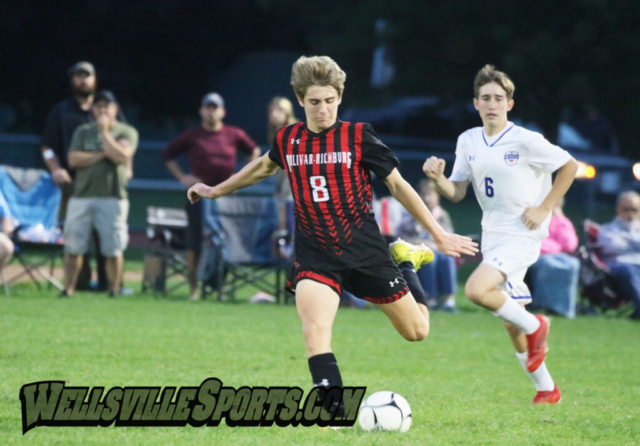 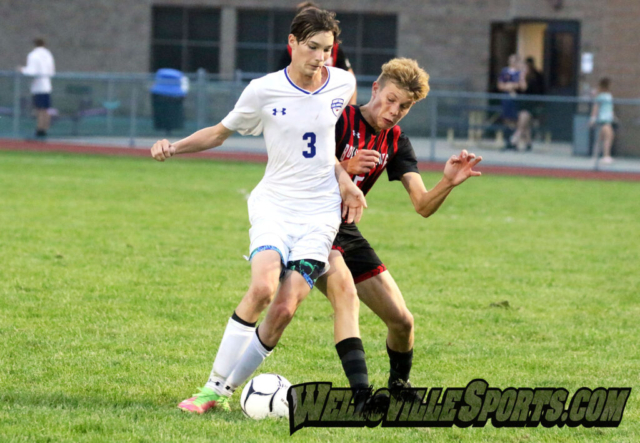 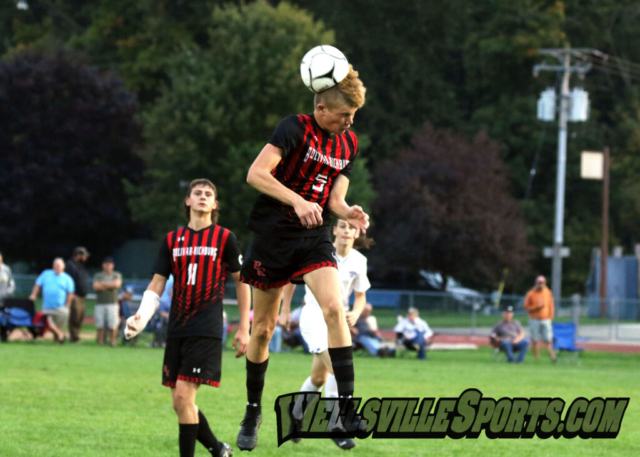 Listed below are all four teams and their next games coming up, after the weekend:

Bolivar-Richburg — at Wellsville, Tuesday at 5 p.m.

Andover/Whitesville — at Hammondsport, Monday at 6:30 p.m.

ALMOND — All through an 7-9 campaign last season, the Genesee Valley/Belfast ladies grabbed five of those wins by a blanking of their opponent. Entering Saturday morning’s road trip to Alfred-Almond, the United team was on a similar pace towards that marker — in their first three games.

After a hot first half start against the host Lady Eagles, Genesee Valley/Belfast would go on to make it four straight shutouts to start their 2022 campaign, as a hat trick from Hannah Southwick-Powers assisted in igniting it, while the defense kept the opposition at bay across all 80 minutes in their 4-0 shutout.

“We came out flat in the second half, but our defense has been rock solid to start the season,” said GV/Belfast co-coach Duane Powers. “We had five shutouts all of last season, now we have four through our first four games. It’s definitely a great start, and it helps after we moved Mary (Hamer) to sweeper last season. She was learning on the go, but fast forward to this year and she is much more comfortable taking control for us. It’s allowed us to open up the field even more, because we all have so much confidence in her and the defense as a whole.”

Genesee Valley/Belfast (4-0) would account for their first three goals all in the opening half, with Harley Proctor breaking the ice within the first 10 minutes, hooking up with Adison Grusendorf on one of the team’s first big rushes into the Alfred-Almond zone. From that point forward, the rest of the offense came from Southwick-Powers with her first coming off one of two Sophie Zillgitt passes just over four minutes later at the 29:13 mark.

The two would connect once more to branch out the Genesee Valley/Belfast lead to three to end the first half, completing her first half hat trick at the 25:58 mark on the board.

After a battle through the midfield to start the second half, the visitors in white and black capped off the victory with one final goal by Southwick-Powers to complete her hat trick near midway, with Sondra Guilford handing off the final assist. Genesee Valley/Belfast would total 13 shots on the Alfred-Almond net, whilst only giving up five in return on defense.

Ashley Burrows would make all five stops to record her fourth shutout in between the posts.

Genesee Valley/Belfast will now aim for their fifth straight win when they return to action on the road Wednesday night, visiting the Cuba-Rushford Lady Rebels in a 5 p.m. first kick.

The return of the Wine Walk in Wellsville!