(At the end, check out Chris Brooks’ photo galleries from multiple games the past three nights. Where is Brooksie? Follow him on Twitter at @iambrooksie)

BELFAST — In recent years, it’s a tournament crown that the Bolivar-Richburg Wolverines haven’t been able to get their hands on. It’s also one that the Houghton Academy Panthers took aim at capturing for the first time in their first year of participation in Belfast.

A Friday night under the lights to determine who would win the crown for the very first time would settle that. And it was one hard-fought battle. One that required a little bit of extra time.

With each team scoring just once across the 80 minutes of regulation, overtime settled in. The midfield battle between both teams raged on all evening, but one team was able to catch a fortunate break with under four minutes left.

Ian Unfus was there to deliver.

The Bolivar-Richburg senior was Johnny on the spot, drawing a huge Houghton Academy penalty from inside the box to set up a potential game-winning penalty kick, one he would capitalize on with 3:57 remaining to give the Wolverines their first tournament crown in Belfast in dramatic fashion, taking the 2-1 decision over the Panthers. 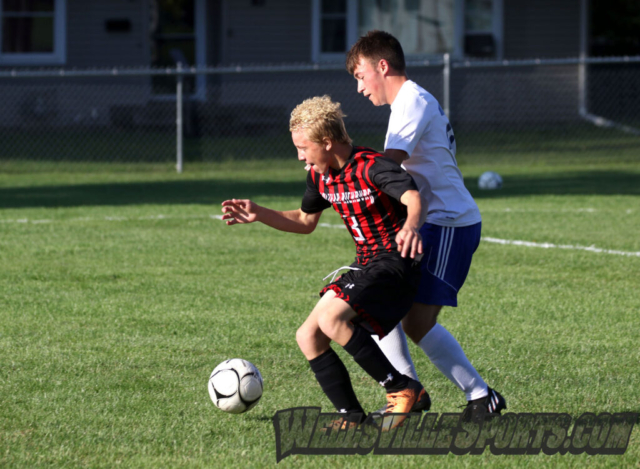 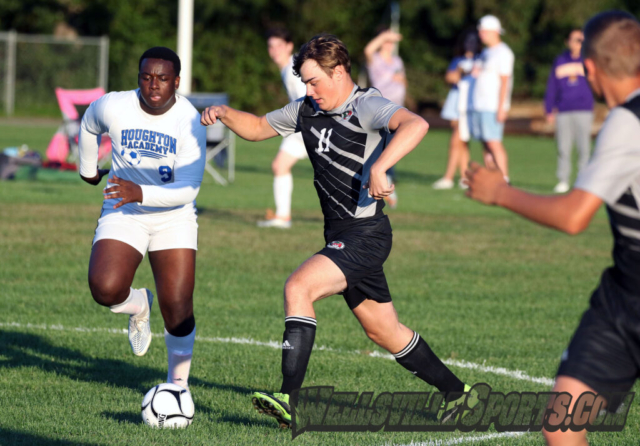 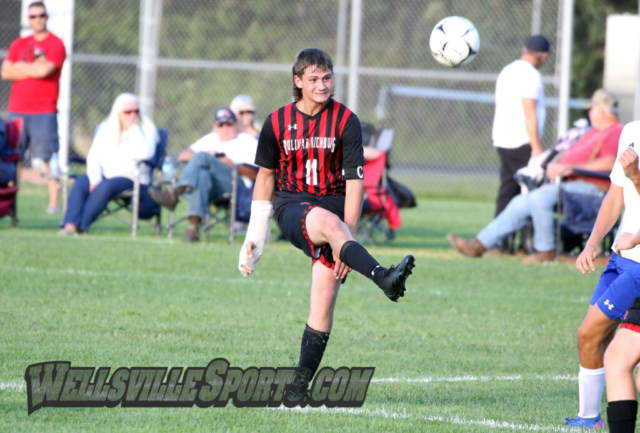 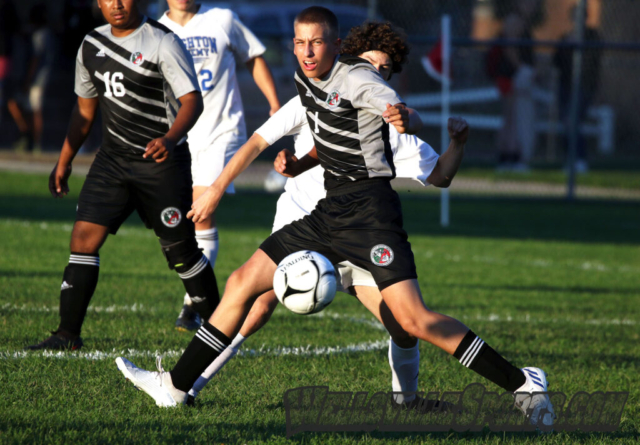 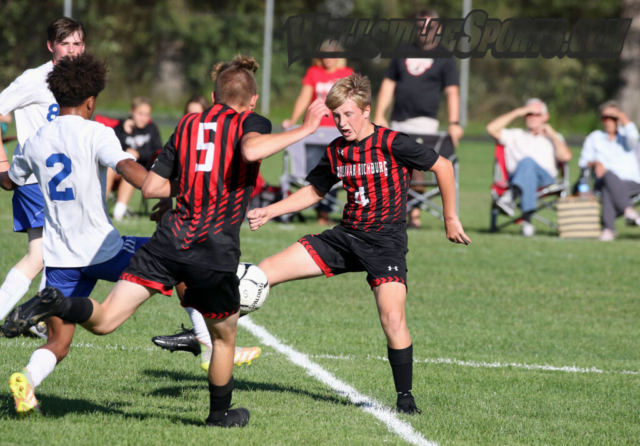 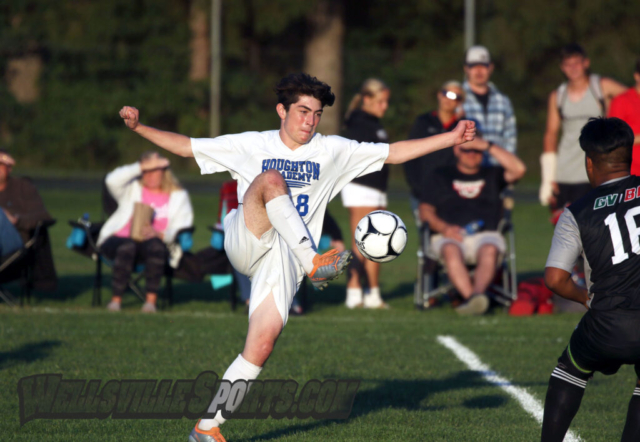 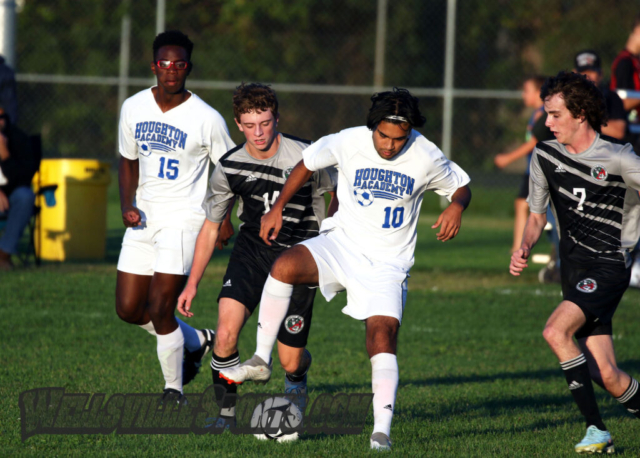 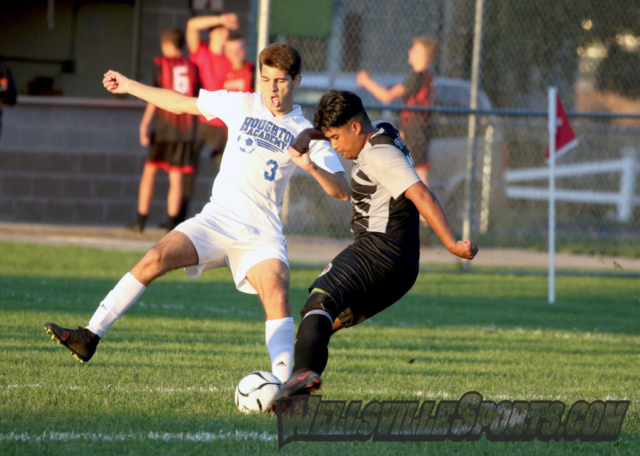 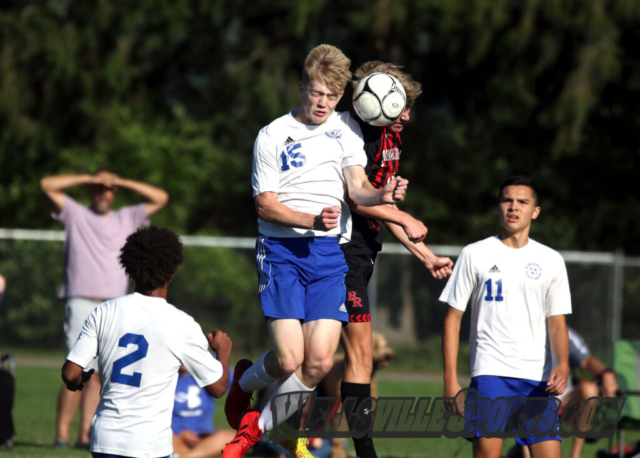 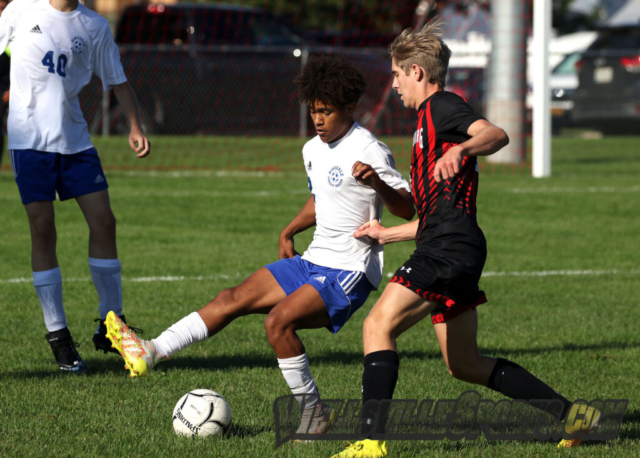 “I have been preaching to the boys that it will be amazing to see what we can do when no one cares who gets credit, as long as the team gets the win. Hats off to every person on our team. I am so proud of them,” said Wolverines coach Mike Zilker. “This was a great win, a great group of boys. I told them coming in that it was going to take hard work, dedication and perseverance. We controlled the ball really well, had numerous chances and worked well together as a team to make this happen.”

The comeback victory was ignited after Houghton Academy was able to draw the line in the sand first after what was deemed a back-and-forth midfield, defensive battle all throughout the first 40 minutes. Both teams would scoop up multiple opportunities to try and cash in, but would ultimately settle on the scoreless tie heading into the break.

In the first 10 minutes of the final half however, the pace was taken to a higher level. The Panthers (1-1) were the first team to strike on an opportunity stemming from an indirect kick deep in the Bolivar-Richburg zone. The chance, which was elected to be taken by Pedro Rebello, wound up finding the back of the Wolverines net behind David Abdo on a high-rising shot to the upper 90 to break the ice.

It was a lead that the Panthers were able to hold onto across yet another defensive battle across the field. With time running out in regulation, one of 13 total corner kicks arose for the Wolverines (2-0). The kick was put in on goal by Aydin Sisson, and along the way, saw a perfect touch of the ball into the net from David Baldwin to tie the game up at one with 14:47 left.

The Wolverines took a 13-1 decision in the corner kick department.

The game would remain deadlocked going into the first overtime period, where the Wolverines were able to complete the comeback off of Unfus’ penalty kick, securing their first ever tournament championship in Belfast.

“Hats off to Houghton, they have a great team, a great coach and they fought really hard. They were on the unfortunate end of a bad bounce, but they played very, very well,” said Zilker. “Our perseverance was put to the test when they scored first on a beautiful ball to the upper 90. My team had to dig deep and battle back, and they did just that with Aydin setting up David’s goal from the corner. Then we were able to put the finishing touches with Ian’s penalty shot and win us this tournament.”

Bolivar-Richburg was able to outshoot Houghton Academy by an 11-5 count, with Abdo picking up the victory behind four saves. On the flip side for the Panthers, Marco Zanini set aside nine shots.

Prior to the lights coming on to determine this year’s winner, Consolation round festivities pitted Hinsdale and Genesee Valley/Belfast against one another in a game that saw five different scorers all get involved. That being for the hosts, as they built upon a 2-0 lead at the half with four second half goals to rocket past the Bobcats with a 6-0 shutout.

“I thought the boys responded really well after playing. It was a complete 180 from the Houghton game the other night,” said GV/Belfast coach Mark Sullivan. “They played with more passion and energy tonight, and there are going to be nights where we have those minor bumps in the road. It will be a little while before we figure out where everyone begins to start fitting into their positions on the field.”

Evan Terybury led the goal scoring with a pair for Genesee Valley/Belfast (1-1), while Stiven Lopez, Justin Hill, Daemon Cobb and Thayne Cobb all had one to pitch in along the way. Sal Gambino, Canaan Sullivan, Sean Mahon and Luke Snyder all had assists to hand out to help fuel an offense that generated 20 total shots against the Hinsdale defense. The hosts outshot the Bobcats by a 20-7 count.

In goal, Thai Norasethaporn made all seven stops to record his first shutout of the season. As for the Bobcats (0-2), Ethan Chapman put a stop to 14 shots.

Across the two-part event, Reiss Gaines was awarded MVP honors for the Wolverines, as he recorded a hat trick in the game’s first round battle with Hinsdale to help propel the team into the Championship round. Sisson, who had four total assists, along with Unfus and Landon Barkley were named All-Tournament selections.

Regular season action for all four teams will resume after the Labor Day weekend on Tuesday, when Genesee Valley/Belfast visits Houghton Academy for a 5 p.m. contest, while Bolivar-Richburg hits the road themselves for a 6 p.m. first kick in Hinsdale.

Addison Tourney: Lions bounce back in Consolation with blank of Alfred-Almond

ADDISON — Although the season debut for the Lions was narrowly lost to the hands of host Addison back on Wednesday, the tide was turned to close out their tournament tenure in the Consolation round on Friday.

After a back-and-forth battle against the Eagles of Alfred-Almond, Wellsville would find their edge in the second half, scoring a pair of big goals to work their way ahead and eventually towards victory, as they provided a 2-0 blank to give first-year head coach Noah Holmok his first career win.

Holmok, an Alfred-Almond graduate himself, was excited about recording the victory against his alma mater.

“I was definitely hyped about my first win, especially with it being against the school I played for, for so long,” he said. “The boys all played well tonight, and we were unlucky not to get on the board right away. But I was proud of them for coming out hot in the second half. With the offense, our defense was strong right behind them.”

Wellsville (1-1) was able to grab their goals in the second half rather quickly, after going up and down the field against Alfred-Almond for much of the opening 40 minute period. Cody Costello was the first to strike for the Lions, breaking the ice with his second of the season off a feed from Ty Vogel.

A short time later, the lead was extended with Trenton Green getting back on the board himself off his second of the season, making a solo run to the Alfred-Almond cage to put the game on lock with his big piece of insurance.

Wellsville outshot Alfred-Almond by a 16-10 count, with Logan Dunbar setting aside all 10 shots to preserve the shutout in between the posts.

The Lions will resume tournament action on Thursday, when they take on the Campbell-Savona Panthers in opening round festivities at the Craig Lawrence Memorial Tournament at Wayland-Cohocton. First kick between both squads is set for a 5 p.m. start.