Chris is the sports editor at wellsvillespots.com where he features all sports, boys and girls, with stories, quotes and box scores. And of course, amazing photos.

He is also a must-follow for sports fans on Twitter (@iambrooksie) and his photos are purchased by parents and teams for senior night photos, posters and graduation parties.

If you are interested in sponsoring Chris and his photo galleries on the Wellsville Sun, please send us an email ([email protected]). Giant Food Mart of Wellsville and Cuba is the first sponsor of the student-athletes Chris captures in action.

Here is a gallery from last night and a look at the writing Chris produces daily after: 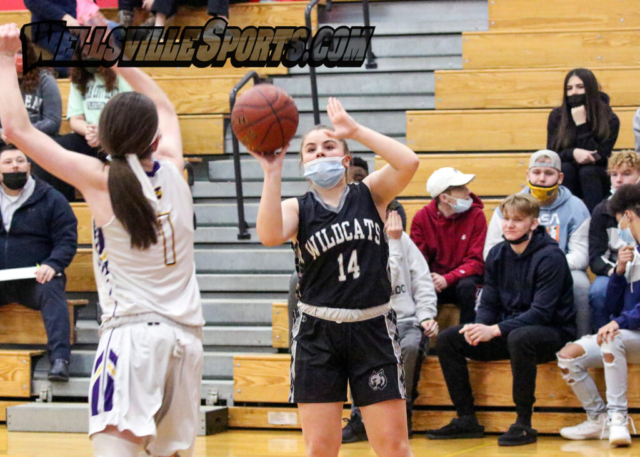 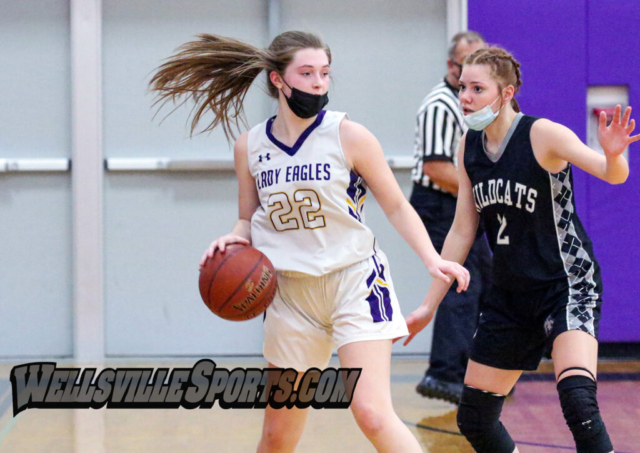 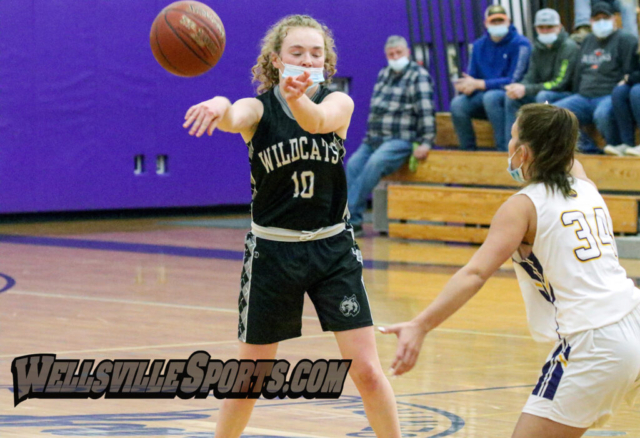 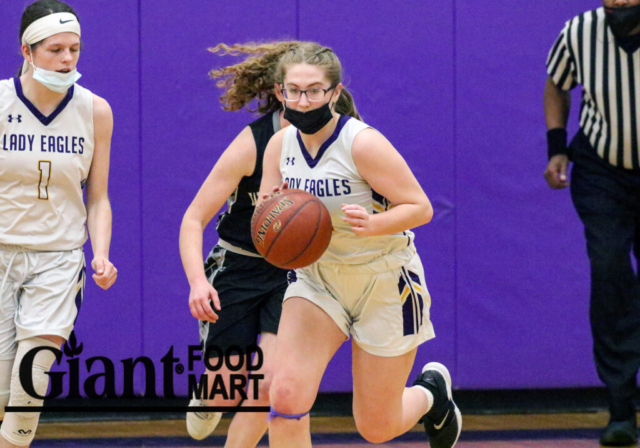 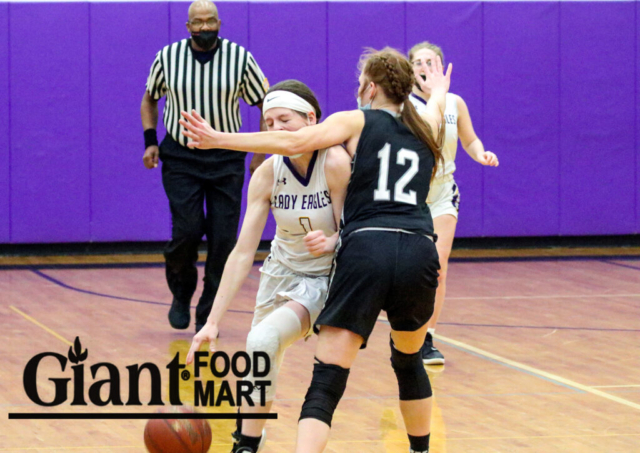 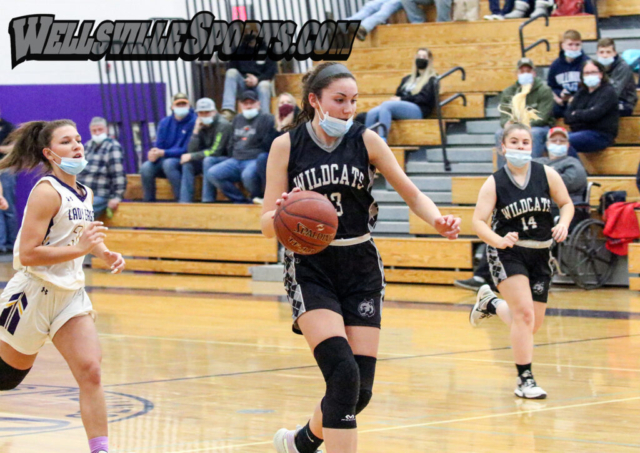 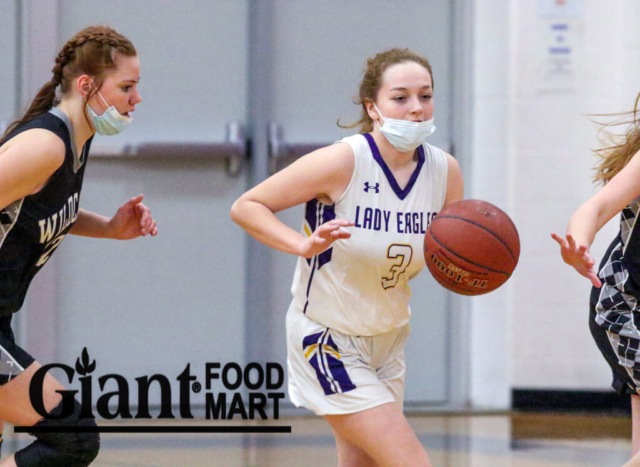 FRIENDSHIP — A slow opening frame developed to get the Sectional season get underway for both No. 9 Jasper-Troupsburg and No. 8 Friendship/Scio in the girls side of the Class D2 bracket on Wednesday, with the winner punching their ticket to visit top-seeded Northstar this weekend in the next stage.

Both teams fought their way through a close battle in the first quarter, but then the second quarter saw one team begin to break away. That being the ninth-seeded Lady Wildcats, as they posted two scoreless runs in the first half against Friendship/Scio, the latter coming right before halftime to push their lead to double digits ultimately for good, securing the upset victory by a 51-30 count to advance to this weekend’s Quarterfinal round.

“We had it down to nine toward the end, and then the wheels fell back off,” Friendship/Scio coach Ashleigh Lewis said. “It’s really hard to win a basketball game when we can’t find a way to get the shots to fall. It’s been our main thing all season. We get the shots, the looks we want, but we can’t put them away. It’s a process, and we’ve started from scratch since the start of the year. Hopefully tonight will help us get better going forward.”

The Lady Wildcats took the early advantage right out of the gate after a slow offensive spurt by both sides, as they went on to record the first of two scoreless runs through the first half to grab the advantage over Friendship/Scio (7-14). Led by a pair of baskets from Lauren Ross and Natalie Cornell, as well as a Kayla Atherton three-pointer, it provided Jasper-Troupsburg a 7-0 run near midway to work with.

That seven-point buffer would remain throughout the half until the visitors in black and gray doubled the size to 14 when halftime arrived, accounting for another long run that saw as large of a lead as 16 develop, with Ross leading the way with five more points within the team’s 9-0 run of Friendship/Scio to help close out the half.

Friendship/Scio would attempt to chip away at their deficit through the second half, getting it to as low as nine, but the first half runs provided by Jasper-Troupsburg would prove to be too much to overcome in the end, as they went on to outscore the hosts in white and purple in the last two quarters to solidify their lead for good.

Nevaeh Ross led the offense for Friendship/Scio with a game-high 13 points to pair with nine rebounds, nearly completing a double-double. Kadence Donohue drained three of the team’s six three-pointers, for nine points to couple alongside with six rebounds of her own.

Friendship/Scio’s season is officially over, as they conclude their 2021-22 campaign with an overall record of 7-14. The team will graduate just two Seniors at the end of the year, in Melana Davenport and Keely Sisson.

WARSAW — Warsaw’s Emma Tangeman was simply unstoppable on the floor on Wednesday, as the Lady Tigers sharpshooter put together a game-high performance that allowed a tone against No. 9 Cuba-Rushford to be set in the first quarter and onward, as the No. 8 seeds rolled their way towards triumph with a 61-36 home win over the Lady Rebels.

“We had a tough time taking care of the basketball, and we struggled to contain Tangeman inside,” said Lady Rebels coach Aaron Wight. “She got into foul trouble in the second quarter, which gave us a chance to capitalize ourselves, but we couldn’t. I do want to thank our two Seniors that have helped this team greatly. They should be proud of the careers they had here at Cuba-Rushford.”

The Lady Tigers acted fast right away in the first eight minutes of play, posting their biggest quarter of the night against Cuba-Rushford (7-13), posting a 21-11 lead led by Tangeman, who recorded 11 of her game-high 28 points in the midst of the run. After a slow second quarter saw the half reach its end, the lead for Warsaw was pushed out insurmountably upon their return to the court.

In the third quarter, Tangeman helped lead another marvelous offensive effort for the Lady Tigers, posting 12 more points out of the team’s 18 in the quarter to pick up a 45-26 lead going into the last eight minute period, where they would use the remaining time to close out shop on the Lady Rebels, ending their season

Taylor Searle, in her final game of the season, led the visitors in blue and white with a team-high 16 points. Brynn Lavery chipped in with five points, while Shae Maples had four.

Cuba-Rushford’s season has reached its conclusion, as they wrap up with a record of 7-13 overall. The Lady Rebels will graduate just two Seniors at the end of the year, in Ella Jaffe and Lillian Forward.

SHORTSVILLE — The Lady Wolverines of Bolivar-Richburg traveled right alongside No. 8 Red Jacket throughout the first half of play in their Class C3 opening round battle on Wednesday. Although the Lady Indians held a seven-point lead entering the break, they held the momentum.

Upon their return to the floor for the second half, they used it all to pull themselves away from their ninth-seeded opposition, holding them scoreless in a third quarter that made all the difference in the end for Red Jacket to advance onward to the Quarterfinal stage with a 43-32 win over Bolivar-Richburg.

A balanced attack propelled Red Jacket towards success, especially in the first half, when four different Lady Indians ignited the team’s three-point game, with a pair coming in each quarter to fuel their 23-16 halftime lead over Bolivar-Richburg (3-17).

The momentum shifted into the third quarter when Red Jacket ran away from the Lady Wolverines in dominant fashion, holding them scoreless from the field while capitalizing on an 11-0 run back the other way on the offensive to put a lock on their opening round victory.

Despite the loss, Bolivar-Richburg was led by Kayli Giardini, who hit all three of the team’s three-pointers to put toward a game-high 16 point effort. Jessica Majot chipped in with eight points, while Carmen Crowley had six to add.

The 2021-22 campaign for the Lady Wolverines has officially reached its conclusion, as they wrap up with a record of 3-17 overall. The team will graduate four Seniors at the end of the year in Giardini, Majot, Destiny Cantrell and Kaylee Keiser.

Wiser’s Wramblings – My Mother Was a Factory Worker