Home » Who’s that kid on the bike?

Who’s that kid on the bike?

Whatever Officer Jim Brizzee said to that little guy on his bike sure made an impression. When I first met “Bobby” Grossman in middle school, a few years after this photo, he was already a first responder as a youth member of the Wellsville Fire Department. By the time we got to high school, Grossman had a lightbar on his Dodge Omni, an emergency radio, and of course a pager that he never let out of his sight. If the “tones went off,” Bob would immediately race to whatever scene was unfolding. Sometimes he could be seen running out of class to respond if help was needed.

We caught up with our old buddy, now the Deputy Chief of the Zebulon Police Department in Zebulon, NC. He is the son of the late Robert and Mary Lou Grossman and has plenty of kinfolk in the Wellsville area who are very proud of that little guy on the bike. Here is his most recent professional bio, a picture of DC Grossman being promoted in 2020, and standing with his fellow officers:

“Deputy Chief Grossman grew up in the small upstate New York town of Wellsville, which was mostly made up of dairy farms and factories. During his teenage years he became involved in the public safety community, becoming a Junior Fireman at the age of fourteen. Over the next four years, he shadowed volunteer Fireman and learned all he could about firefighting.  At 18, Bob became a Volunteer Fireman and an Emergency Medical Technician (EMT). 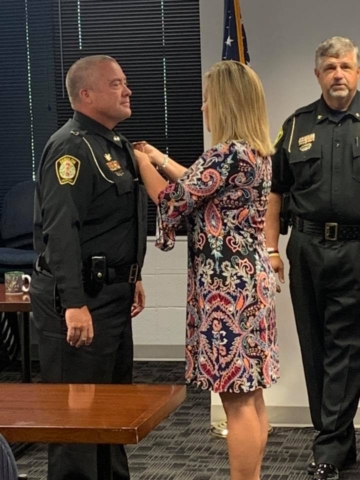 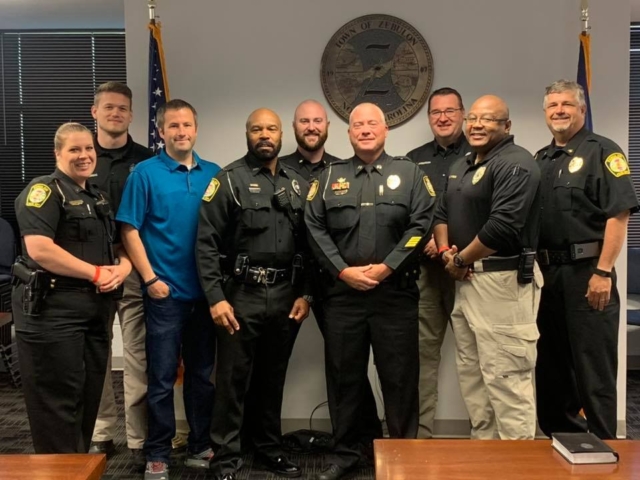 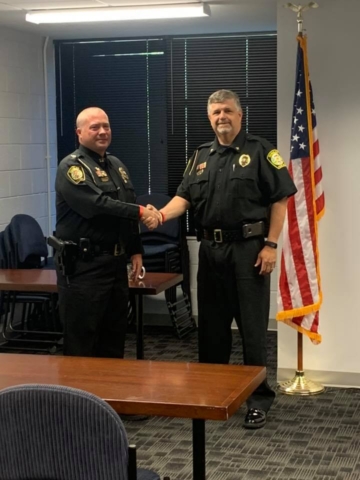 Bob graduated from Wellsville High School in 1995 and enrolled at Jamestown Community College in Olean, New York to study Criminal Justice Science.  While in his first semester of college, he was offered a part-time position as a Telecommunicator with the Wellsville Police Department.  Studying criminal justice and being Telecommunicator set Bob on the path to become a Police Officer.  After earning an associate degree, Bob enrolled in the Basic Law Enforcement Training Academy, also held at Jamestown Community College.  At the conclusion of the academy, Grossman was hired as a part-time Police Officer at Wellsville Police Department.

Over the next two years, Grossman served as a part-time Telecommunicator and Police Officer. Shortly after the two-year mark, Bob decided he wanted to pursue a full-time job in a state with warmer climate.  In 1999, he moved to North Carolina and was hired as a police officer in Zebulon.  He has served as a Patrol Officer, K9 Handler, Narcotics Investigator, Patrol Sergeant, Detective Sergeant, Lieutenant and Captain.  Deputy Chief Grossman has served in his current role for nearly two years, overseeing all department operations.  Grossman has seen tremendous growth in his community, both in population and land mass.  He has witnessed a transformation in police services over the last decade and helped carry his department forward.  DC Grossman is a graduate of Coastal Plains Management Institute, Burden of Command, Law Enforcement Leadership Development, and is currently working through the Credible Leadership Curriculum.

Bob contributes much of his success to his supportive family – wife, Nancy, and three children, Cameron, Zackary, and Brittany.  Brittany has also blessed them with two grandsons, Bryson and Easton.”

Congratulations to one of Wellsville’s finest on an impressive career!! And great job Officer Brizzee!!!!

What’s going on behind the scenes at the Wellsville Giant Food Mart ?