After several months testing the waters in the Alfred area with pop-up meals and as a regular at the Alfred Farmers Market, Temple has opened a downtown location. Serving from the previous “Nana’s Japanese Cafe” at 56 N. Main St. this unique new eatery has just opened for business.

We talked with entrepreneur and chef Kevin Em about his world travels, history in culinary art, and the mission behind Temple. His road to Alfred NY is about as interesting as it gets, the story includes ballistic missiles, Buddhist monks, Ann Arbor MI, and Silicon Valley.

Born in the United States, Kevin continues the Asian-American tradition of Nana’s in Alfred, to the relief of many. He received an undergraduate degree from New York University and graduate degree studying at Tsinghua University in Beijing, China. The story has an element of James Bond at this point as Em explains that his graduate work was, “studying the North Korean ballistic missile program.”

His travels after that education really built the foundation of his culinary art portfolio. Looking for some inspiration and an interesting job, Kevin went to work for a Korean Buddhist temple as a volunteer cook. Every morning his job was to ascend the steep grade to the temple and prepare eighteen monks, “breakfast, lunch, and dinner.” While working for the monks, Kevin discovered  the wonders of a diet with an ancient history. The monks diet was simple and nutritious, using ingredients that have been preserved and fermented for over a century. Em was clearly inspired.

The monks, of course, do not consume meat or any other animal products, and much of their diet is based on fermented and preserved foods. This unique diet keeps the body and mind in balance, maintains a healthy gut biome, and practices what Kevin explained as, “kindness to our bodies.” The Korean Buddhist temple food being served in Alfred NY was born from that education.

After his wife, Rey Jeong, enrolled at the University of Michigan for her MFA degree, the couple moved to Ann Arbor and Kevin started working at a restaurant. As a cook at a popular Italian restaurant, he learned more about a culinary tradition on the other side of the world. Em openly brags, “oh ya I was throwing pizza dough and making sauce from scratch everyday!” His co-workers commented on his zeal for cooking and encouraged him to try and land a chef job at the university for better pay and benefits. Shortly after he went to work as a line cook at a University of Michigan dining hall. That experience proved to be formative for Em as well.

Along with that new job came the pandemic and Kevin gradually learned all the lessons of institutional food and life with Covid. A far cry from the simple, healthy food he served the monks, Kevin was content but not exactly inspired. The pandemic started to take its toll on the university dining staff and the staff numbers dwindled. As Em describes:

“…. when I was put on dishwashing duty because of staff shortages, that is when the job started to become dangerous, both mentally and physically. I really felt that I could be hurt and started to begin singing aloud to relieve the stress.”

Remembering the monk’s motto, “kindness to our bodies,” Kevin left the university job and took a personal breather. As that door closed, another door opened when Rey Jeong was hired as a professor at Alfred University. The couple arrived in the sleepy college town and immediately thought of Korea. The mountainous landscape and tight-knit community was very similar to what they experienced in Korea. The opportunity to serve the food of the temple presented itself again when Kevin learned that the longstanding Asian culinary staple in Alfred, “Nana’s,” wasn’t going to reopen and the space would be available.

As the stars lined up, Chef Kevin began planning. Soon he was working with the Alfred Farmers Market selling “handheld food” at the market, and selling out. The friendly faces at Hummingbird Hill, a eco-resort just outside Alfred, Alex’s a local townie bar, Kent Beer Company, and The Old Mill Inn welcomed Kevin and his cuisine with pop-up style events. Clearly the demand was strong and the chance to create “Temple” had arrived.

Em’s vision for Temple is as simple and clean as the food he aspires to serve. The mostly vegan menu will include select seafood dishes, but as Chef explains, “no land animals.”

In a college town, especially one with a growing Asian student body, Em beams about his new role serving hungry bodies, and minds. After working at the University of Michigan he realizes the shortcomings of the institutional diet and the impact on students. This chef is excited to offer an alternative:

“How wonderful to enhance and boost the community by serving healthy food that relieves academic-related gastrointestinal stress!” 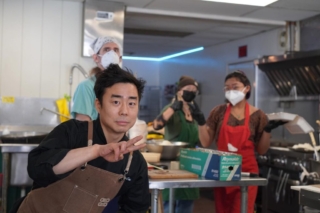 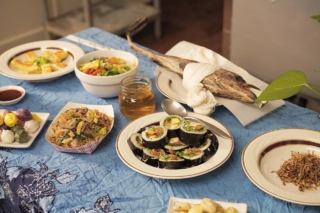 Temple just finished up the first week of serving Alfred breakfast and lunch. Chef Kevin reports on the first week’s most popular items and the general vibe:

“The most popular item was the vegan curry served with fried egg over rice. The close second was the spicy tuna kimbap, a Korean dish that is similar to a Japanese sushi roll. The reception has been very warm.”

Temple is open Monday thru Friday, 11am until 2:30pm. While they do plan on having some limited seating in the future, for now they will be serving takeout only, “handheld food.” Orders are accepted online and the new website just launched. Take a look and give Temple a chance to either prepare your favorites or introduce you to a new way of looking at food. https://www.templeinalfred.com/

Burton, St. Bonaventure earn ESPN respect as Bonnies climb to #16 in the nation