It may have just been an exhibition game, but it was a chance for St. Bonaventure University men’s basketball public address announcer Colin Sullivan to practice saying, “The 23rd-ranked St. Bonaventure basketball team” for promotions of upcoming games.

It’s been well-documented — this might be the most excited fans have been since the 1970’s for a St. Bonaventure season. Sure, the team has had incredible success under Coach Mark Schmidt, but unless the Bonnies win the A-10 tournament, there’s always the worry they won’t get into the NCAA March Madness Tournament.

Not this team. Not with five seniors (all starters) back, not with a deep bench, and once again, Schmidt and one of the best coaching staffs in the country.

However, the talk has all been on paper and social media. Thursday night, with uniforms on, with referees, a scoreboard, fans and another team, they were finally the 23rd-ranked Bonnies, ranked for the first time like this since 1971.

After a balanced 95-54 exhibition win over Alfred University (Division III) without two starters, it was clear why the team has respect and why it’s going to be an exciting season.

When asked by the Wellsville Sun about the rankings, Schmidt, who has 327 career wins (245 at Bona) said this team is too mature to falter because of talk. 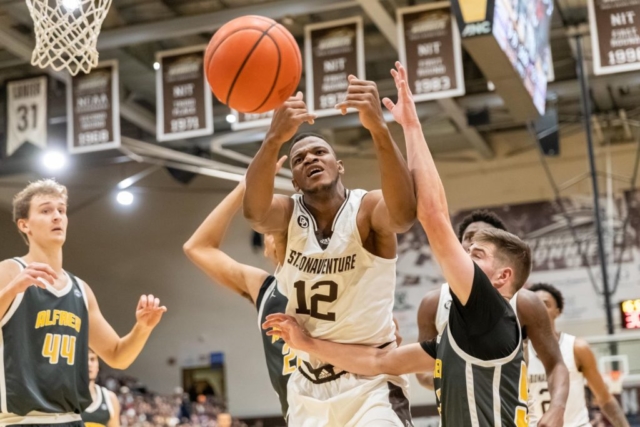 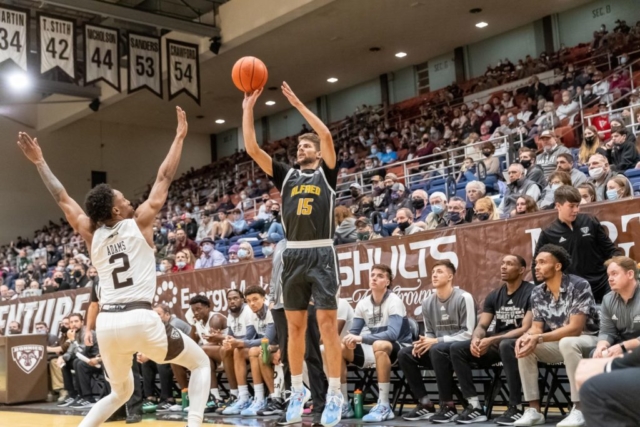 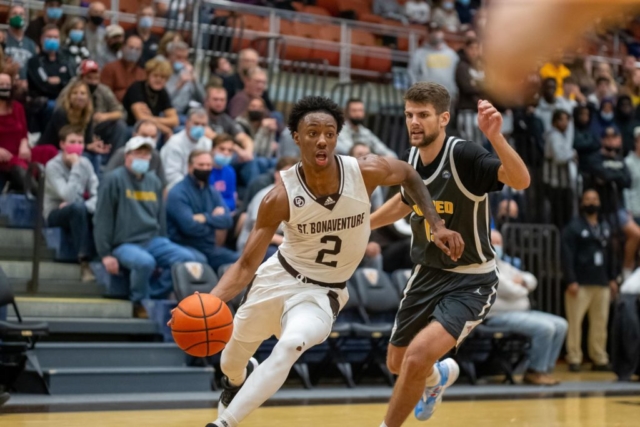 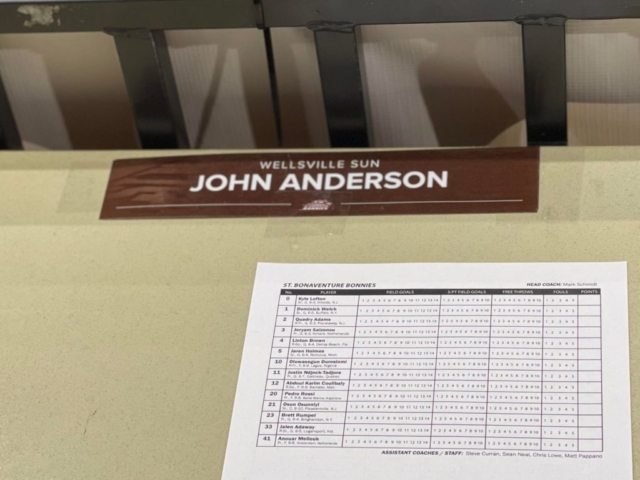 “This whole ranking thing, if we have a good year or if we have a bad year, it’s not going to because our guys didn’t work or they have big heads, that’s not going to be the case,” Schmidt said. “We have five seniors who understand exactly what they are up against and all five of those guys have been working their tails off. There is no concern from my standpoint we are going to be caught up in all of the hoopla and all that stuff. They understand these rankings are great, it’s great for the school, it’s great for them, it’s great for the program, but it doens’t matter when the ball goes up at 7 o’clock against Siena.”

St. Bonaventure opens the season Tuesday at home with Siena (Tickets at gobonnies.com).

However on Thursday, with Lofton and Adaway sitting (both are hopeful for Tuesday), sophomore Linton Brown stepped up with a game-high 19 points, eight rebounds, a steal, assist and shot 50% from 3-point range.

“It boosted my confidence a little bit,” Brown said. “Like coach said, I’ve been in a gym a lot, with my team and by myself, so (this game) gave me a boost for Tuesday’s game. The RC is a different place with fans. I can already feel it.”

Holmes took over the point guard spot and had five assists and zero turnovers to go with his 11 points on 4-of-6 shooting in 24 minutes. He said the off-season work at Tyler Relph Training in Dallas helped.

“(I’m ready) if coach Schmidt throws me out there. I have to give kudos to (former St. Bonaventure great and Mr. New York State ,Tyler Relph) down in Texas, he worked with me a lot this summer on pace and my progression readings and my overall ball-handling,” Homes said. “I’m a lot more comfortable out there and I think I changed my game a lot. But I was out there with five guys I know and that made it easy for me. It was a learning opportunity to showcase my skills and what I’ve been doing over the summer and overall it was a nice win for the team.”

“We did some good things and some bad things. The young guys had some positives and can get some positives out of it. Exhibition games don’t count, we will see the real thing Tuesday against Siena,” Schmidt said. “Kudos to the students, it was packed. In the student section, I don’t think we could’ve fit more in. And then the community, I think we had 2,000 up there, it was terrific.

“Just to have people in the seats makes the Reilly Center what it is and we miss it,” Schmidt added. “We haven’t had them in since March 4, two years ago. Last year we had a great year, but not playing in front of the fans was disappointing.”

More on the game from gobonnies.com

For the first time in 615 days, the St. Bonaventure men’s basketball team played in front of a crowd inside the Reilly Center and the Bonnies did not disappoint, rushing past visiting Alfred, 95-54, Thursday night in exhibition action.

The nationally-ranked Bonnies shot nearly 61 percent from the floor (40-for-66) including better than 63 percent during the second half.

Alfred proved pesky in the early going as a young Bonnies lineup worked to find a rhythm during the opening minutes.

The Saxons pulled within 27-24 before a 19-0 explosion from the hosts stretched the lead to 20 with two minutes remaining in the half. During the hot stretch, the Bonnies went 7-for-8 from the floor, proving too much for the visitors.

St. Bonaventure pulled away to a 50-28 at intermission, buoyed by shooting 58 percent (21-for-36) from the field. Eight different players scored during the Bona outburst before the half as the Bonnies displayed some of their newfound depth which has excited fans throughout the offseason.

The Bonnies continued their push, scoring nine of the second half’s first 11 points to extend their advantage to 59-31 and never looked back.