Words From Wiser: Tracking from Rug Rat to Track Rat

This Sun article is going to feature local dirt track racing, my childhood family hobby, but from my perspective, and that of this column, I will emphasize the people I met, associated with, and in many instances, friended with long ago. The tracks of this article started figuratively and literally, in the early 1950’s. Most of the scenes and people mentioned herein are from the the immediate area, so I presume will be recognizable and lend credence to my sharing this topic.

My exposure to “stock car” racing goes all the way back to the summer of 1950 when the Wellsville racetrack debuted with an attendance of around 4500 people. The track was located on the old fairgrounds site, where the Elementary school now stands. Early days Sunday racing didn’t pan out partially due to dusty track conditions and restrictions from Sunday Blue Laws. Saturday nights became possible with the addition of lights and the track was very well attended by both fans and drivers. Our family viewed the races from a hillside overlooking the track. Local racing names such as: Bill, Dean, and Herb Layfield, Jack Thomas (1955 NYS Late Model Champion), Fran Bohne, John Gostley, Whitey Gorsuch (more on him later), George Egbert, and Howie Slocum are still familiar names to many. Due to the track’s popularity, with the claim of being the fastest track in Western New York, it attracted many of the already seasoned drivers from throughout the region reaching from Elmira to Wellsboro, PA. Notable, to me, among them were Dutch Hoag, Bath; Bud Johnson, Olean; Curly Hatfield, Elmira. Most of these drivers also traveled to many of the other tracks I will mention. With the rapidly developing residential aspects of that Wellsville area, and facing the accompanying local complaints, the track closed in 1955.

Sensing that the Wellsville track was facing problems, a track on a hillside overlooking Cuba Lake up near the skating rink was opened in 1954. The real racing “bug”, for us, began with that track. My stepfather Paul Miles built his first car and chose the number 8Jr. I often wondered where that number came from but, just recently, I saw a picture of a Ralph Earnhardt (Dale’s dad) car with that number. I attribute that track to my meeting and memories of such people, many today still friends, such as Gary and Tom Burch, Cuba; Ford Easton, Friendship (more on him later); Irv Hall, Nile, NY; Joe Collins and his family, Bolivar; and many more. Joe Collins was the head mechanic for our racing team. Joe worked by day at a local car dealership but spent many an evening and weekend working on making our car one of the best in the area. What stands out most in my memory is the likeability and, easy going, personality of Joe. The Burch boys, and my cousins, notably Bill Miles, sometimes bored with the “on track” racing, would climb the hill behind the track and have our own foot races running down the hill. This brings back memories of a few scraped knees and elbows, but maybe also explains my early love of “track and field” participation.

Ford Easton, is the one to whom I owe a debt of gratitude for providing much of the data that greatly enhances and clears the details that my recollection distorts and makes cloudy. Ford published the book Stock Car Racing in the 50’s to which I made a minute contribution. Ford did an excellent job of researching and presenting information on many of the tracks where my family spent every weekend every summer for many years. In the early days Ford would make the trek from Friendship to Nile, to visit to help or watch, and talk cars and racing with my stepdad. Ford put his fondness for racing into a historical collection of many, or most, tracks in the Western New York and Northwestern Pennsylvania area. His book, having already sold over 11000 copies, is still available for purchase thru Amazon.

Any summer or early fall weekend could see us racing on any night or day from Thursday night at Smethport, PA thru Sunday at any number of tracks over the years. The furthest away were at Lancaster Speedway (near Buffalo), and Roulette, PA. Holiday weekends, like Memorial Day and Labor Day, would occasionally throw a Monday into the mix.

In addition to the local previously mentioned drivers, many more regional drivers, many of whom also expanded their careers on the National scene, also frequented the tracks in the area. Some of the names, and car numbers noted in (  )’s if I recall them, are as follow; some I recall more fondly than others: Doc Hoctor (118), Bill Rafter (19), Jackie Soper (7), Don Wood (207), Bud Johnson (27), Fran Pezzimeti, The Yochum brothers (Don, Del and Doug), Bud Phearsdorf, Bruce Van Dyke, Pete and Jim Hurtubise, Stroker McGurk, Dick Hurd, and Squirt Johns. I also recall a “Bodine” from somewhere. There were many others. Too many to recall. A few ladies, mostly wives of drivers, and even my mother on one occasion, graced the tracks in what they called “Powder Puff” races. Some of them would have no trouble competing with, or beating, the men.

Before I introduce the many tracks that I recall having attended and making some additional “informative” comments about, I would like to share a story about my all time favorite driver. I only recall seeing him race as a regular driver at the Cuba Lake Raceway, but his skill, style and dominance so impressed me that I never forgot him. Fast forward many years and while I was in my career of my teaching Mechanical Engineering classes at Alfred State College one day, I was “calling the roll” for a first day class. When I came to a familiar sounding name I called out “Alex Hoag”. In response, one young gentleman near the back raised his hand. As I often do in a “get to know you” interaction with a student, I asked him if he was any relation to my favorite stock car driver Dutch Hoag? “Yes” he replied, “He’s my Grandpa”. “WOW!” I said. We’ll have to talk later. Alex has now graduated with his bachelor’s degree in Engineering Technology from Alfred State College and is making his own name pretty recognizable in the Stock Car racing world. I would also add that his family now owns Black Rock Speedway in Dundee, NY.

Tracks that I recall…I will save a couple till the end of the list to offer comments; Wellsville Raceway, Cuba Lake Raceway, Bradford Speedway, Roulette, Smethport (McKean County), Lancaster International, Hunt Raceway, Hornell Raceway. Woodhull was not yet in existence during my “fanhood”, but is now the “Go To” track in our area. The life expectancy of local tracks is relatively short lived. Woodhull seems to have found a successful recipe despite being remotely located in a “burg” just off route 417.

Whitey Gorsuch is a person that needs special mention. Whitey was listed with drivers at the Wellsville Raceway and if memory serves drove the number 13 car. Whitey, although an excellent driver, made his fame as the premier “flagman” in the area. Whitey started the races from “on the track” and that almost did him in on a couple of occasions having been struck by a car. He would have the aligned cars split on both sides of him as he leapt into the air waving the green flag. For obvious reasons starting is now done from a platform well off, and above, the track.

Three tracks have special meaning to me in addition to our first being Cuba Lake. Olean Raceway was one of the premier tracks in the area at one time. It was huge in comparison to Cuba Lake’s high banked “Quarter mile” track at “one thirdmile”. It opened in 1957 and was immediately successful. It was still running successfully when a decision was made to run what was then Rte. 17, but which is now known as Interstate I86, through that area. The track closed in 1969. On June 8th one year, when my Mom married my stepfather, on the night after marrying, we raced at the Olean Raceway, taking 2nd place in the 25 lap Modified Feature. Less distracted I guess, Paul Miles won the feature the next week. The Angelica Fairgrounds became the site of the stock car racing when the horse track was modified to become a stock car racing track by adding tons of clay and banking the corners. The track featured a grandstand with seating already in place. Angelica was my favorite track both from the seating accommodations standpoint, and from the standpoint that I met what was to become my first “girlfriend” there. This is going to sound pretty corny but I experienced my first romantic kissing of a girl up in a darkened corner of the grandstand. That made my knees weak and my heart flutter. With the end of the summer and the racing season, that brief “childhood romance” became history except for an occasional memory of it flooding back.

Having mentioned both “stock cars” and “modified” cars, perhaps a brief explanation is in order. Today, all cars are included under the generic label of “stock cars”, but “back in the day”, stock cars were pretty much as you would see them on the street, albeit with gutted interiors and roll over bars. That isn’t quite the norm today except for Nascar style cars. The “style” is similar but with fabricated panels being the norm. Early “modified” cars in those days were something along the lines of a 32 Deuce Coupe, often without fenders, stripped down and with a “souped up” flathead or overhead cam engine, with manifolded side exhaust pipes coming out. 1932 thru about 1946 bodies were common and popular back then. That is somewhat of a simplified explanation but will do for the purposes of this article. Most local race cars cars today are typically made from preformed panels with the supply of old style bodies used for modified cars having been depleted. Restored vintage cars today pretty much is the rule for the “classics”.

Thoughts of the Perry Raceway bring sadness and grief with the recollection of a tragic fluke accident that took the life of Dean Layfield one day in the summer of 1961.  Dean was quite likely the best known, and most popular local stock car driver, who had even participated in races on the national scene, including Daytona. Dean was racing in our car at Perry that day as Paul had been having medical problems and had outsourced the driving to several different drivers, at that time. As Dean was racing down the home straight away, a rock came off another car and through the side window striking him a fatal blow in the side of the head. That pretty much was the beginning of the end of our racing activities as that tragedy was too much to overcome, and it took all of the enjoyment right out of racing.

Here are a few pictures of; our ’37 Flatback 8Jr car, One of the “coupe style” accepting the winner’s flag from Whitey Gorsuch, And two featuring the last car built and raced. 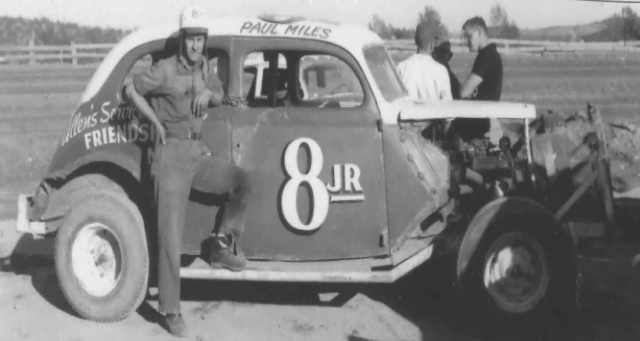 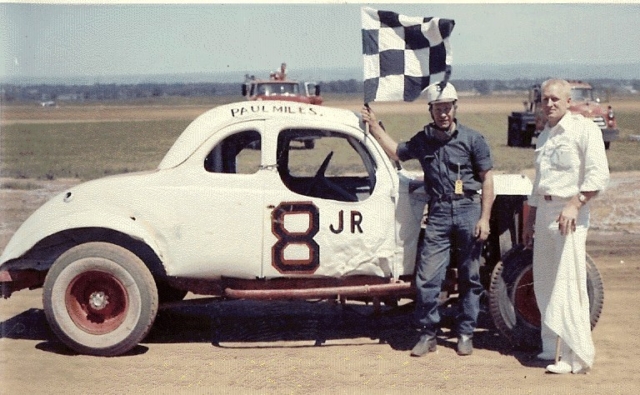 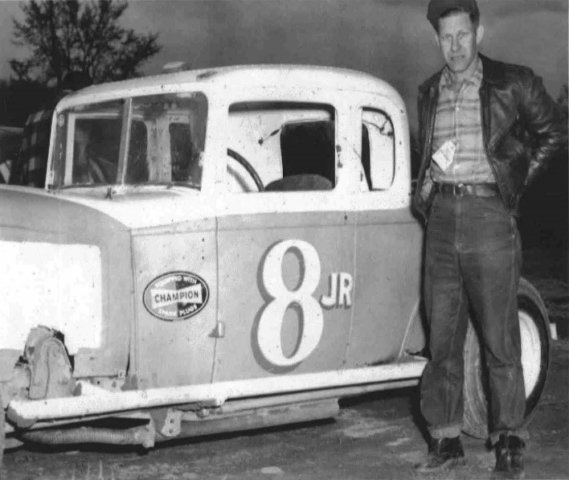 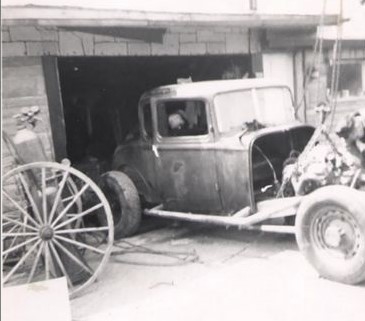