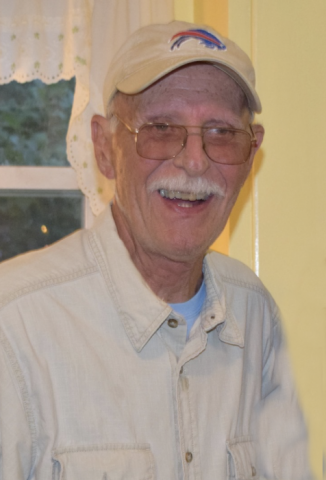 Born March 24, 1948, in Wellsville, he was the son of Raymond and Mary “Evelyn” Lambert.  On July 3, 1971, he married his high school sweetheart, Janet L. Potter, who still resides at their home in Scio.  David was a 1966 graduate of Scio Central School, where he excelled in academics and sports as a Big 30 basketball all-star and letterman in soccer, basketball, and baseball.  After graduating high school, David enrolled at Alfred State College, where he received an associate’s degree in marketing in 1968.  In 1970, David enlisted in the U.S. Navy, initially stationed in Norfolk, VA.  He was a radar and sonar technician and was deployed to Misawa, Japan during the Vietnam War from 1972-1974.  After discharge from the Navy, David began working as a travel agent for the Olean Travel Service for over 30 years. After working for the travel agency, David was employed by Hydramec in Scio and Alfred Travel while enjoying his semi-retirement.  David was an avid reader, outdoorsman, and sports fan, supporting the Buffalo Bills, Buffalo Sabres, and NY Yankees.  While working in Olean, David also supported the St. Bonaventure Bonnies and took his children to multiple basketball games every year.  He loved playing golf, fishing, hunting, and when his grandchildren were in town, he would always be doing something fun with them and enjoying their company.

Surviving besides his wife, Janet, are:  three children, Nichoel (Eric) Wenzel of Wilmington, NC, Jessica (Mark) Williams of Wilmington, NC, and Justin (Christina) Lambert of Dayton, OH;  seven granddaughters, who he would read to every chance he had, Caitlyn, Alexis, Annabelle, Ava, Elleigh, Evelyn, and Emilia;  and a sister Priscilla (Wendall) Brown of Scio.  He was predeceased by his parents.

Friends may call at Olney-Foust Funeral Homes & Cremation, Crowell Chapel, 296 North Main Street, Wellsville, NY on Tuesday, February 23, 2021 from 3:00 – 6:00 PM.  CDC and NYS Department of Health guidelines apply.  A memorial service will be held in July, date, time, and location to be announced.

Online condolences may be expressed at www.wellsvillefuneralhome.com.

To send flowers to the family or plant a tree in memory of David C. LAMBERT, please visit our floral store.

Looking back: Introducing the Wellsville Sun