FILLMORE — The mid-season gauntlet for the Lady Eagles of Fillmore continued on Wednesday after a close, hard-fought battle with Avoca/Prattsburgh at the Barkley Showcase this past weekend.

With opponents like Allegany-Limestone, Andover/Whitesville, Genesee Valley/Belfast and Jasper-Troupsburg all forthcoming, the next opponent in line would feature a Section VI perennial: The Lady Panthers of Portville, a team looking to make some noise as the season goes on.

Right away, the Lady Panthers wasted no time setting the bar for the Lady Eagles, as Jackie Scanlon caught fire from three-point range, making it rain from every angle with six of the team’s nine treys from downtown, giving them the room they needed and more to lay claim on a 41-19 road win in Fillmore.

“When you play a team like Portville, it’s definitely pick your poison,” Lady Eagles coach Tom Parks said. “They have a dominant inside game with (Lilly) Bentley, great outside shooting and some nice complementary players. Tonight, we committed to taking away the inside game and they made us pay from the outside. Couple that with some stifling defense, and you have a Sectional championship-caliber team.”

The three-point game for Portville started right away with two of them in their first three possessions, with Scanlon knocking down her first of six along with Teagan Kosinski to help jumpstart an early and dominant 11-2 run of Fillmore (6-4) before the Lady Eagles responded with some strong drives by Hope Russell, earning one of the two buckets on a breakaway run to trim the deficit down to 13-6 at the end of the opening quarter.

The Lady Panthers however, would pick right back up where they left off, as Scanlon kept connecting from downtown with back-to-back three-pointers to go with a runner off a Fillmore turnover near mid-court. On the other end of the floor, a perfect display of defense to complement a fiery attack, as the team wrapped up the first half with a 12-1 run, branching their lead to 18 to earn all the room they needed to continue locking down the victory.

Despite the loss, Parks hopes that the team plays even harder going forward, with a little under a month left in the regular season.

“What we’re going to take from this game tonight is recognition about how hard we need to play to stay with a team like Portville. If a game like this can raise our level of play, it will ultimately benefit us in the long run.” he said.

Amelia Rose led the Lady Eagles on the attack with a pair of threes, for six points. Preslee Miller had four points to go with five rebounds off the glass, while Hope Russell finished with three points to couple with three steals.

Fillmore is back on their home floor Friday night with a 7:30 p.m. tip-off slated against the Lady Wolverines of Bolivar-Richburg. 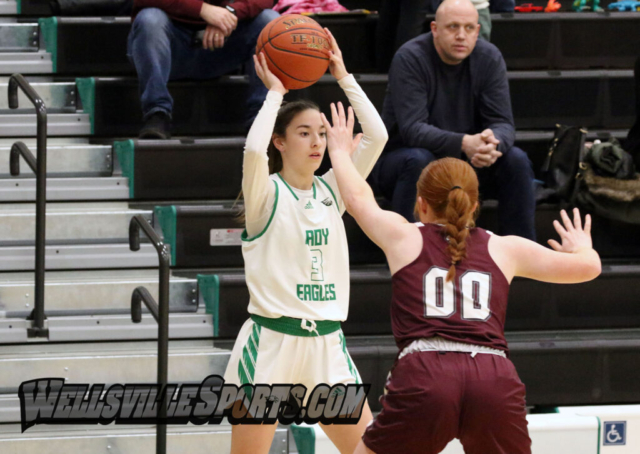 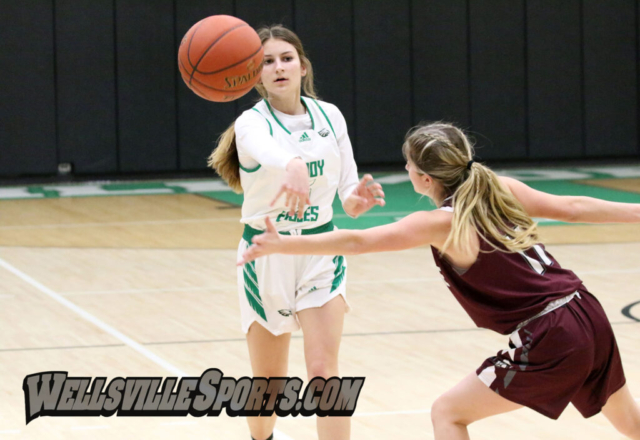 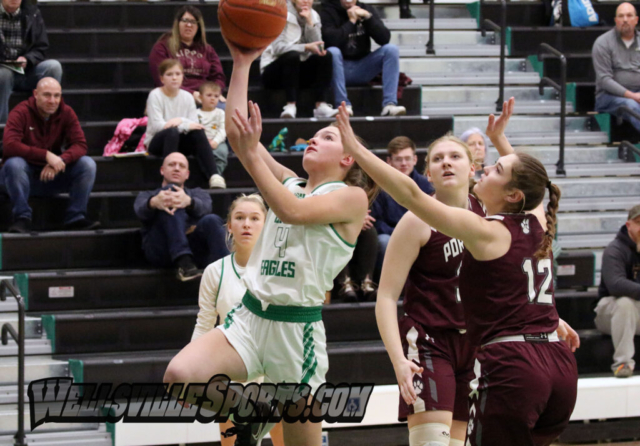 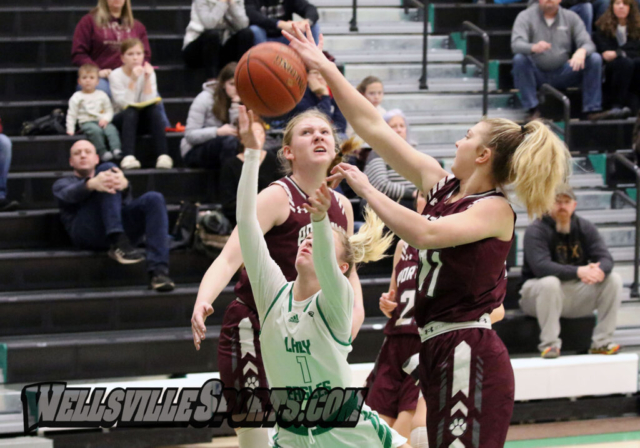 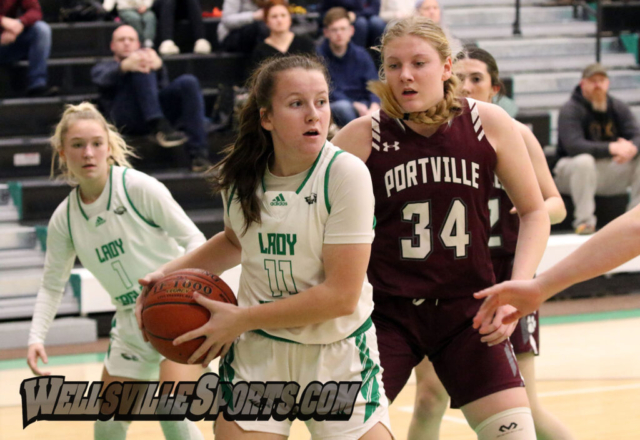 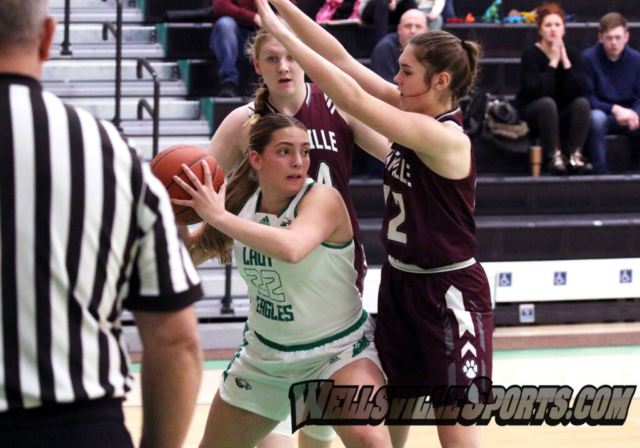 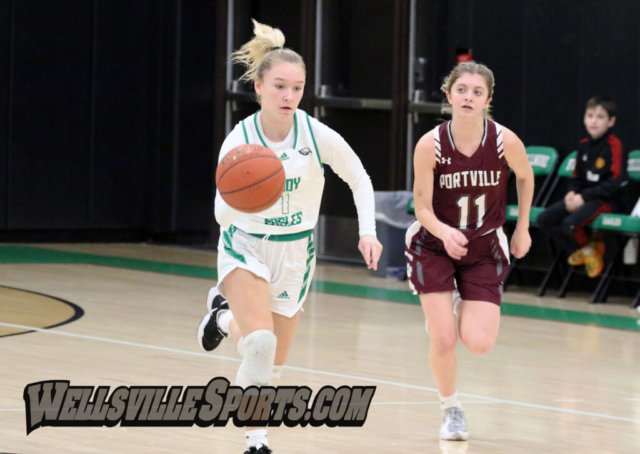 BELFAST — Every Genesee Valley/Belfast player all paid forward a contribution to propel the team’s bounce back victory over visiting Hinsdale on Wednesday, all scoring at least a two-point basket with Mary Hamer and Anna Drozdowski leading the charge on the offensive, as the team raced forwards towards victory by a 53-11 count over the Lady Bobcats, in Belfast.

Hamer and Drozdowski combined to record 30 of the team’s 53 points to lead the offense towards an excellent performance on the hardwood, with Hamer leading the way with a strong night underneath to record a game-high 18 points, while Drozdowski would follow with 12 points of her own.

Adison Grusendorf chipped in with six points for Genesee Valley/Belfast (7-5), who started with a 15-2 run of Hinsdale in the opening quarter and never looked back.

The Lady Bobcats (0-12) were led by Kaleigh Buckles and her four points.

Both teams are back in action Friday night, as Genesee Valley/Belfast now heads to the Jungle to welcome in Cuba-Rushford for a 7:30 p.m. visit, while Hinsdale heads back home to welcome in Andover/Whitesville for a 6 p.m. contest.

CANISTEO — Lillian Mullen assumed control from every angle on the floor for the Lady Redskins of Canisteo-Greenwood on Wednesday, as the team put together their 14th straight victory behind a powerful opening eight minutes to take care of business against visiting Alfred-Almond, taking the 48-16 decision.

Mullen led all scorers with a game-high 21 points, including five of Canisteo-Greenwood’s (14-0) six three-pointers. Brooke Burd collected 10 points of her own to pair with seven rebounds and five blocks, while Bailey Mullen and Peyton Peters each had four points. Adding special teams help along the way was Hailey Davis, who grabbed six additional boards for the Lady Redskins, who fired on all cylinders with a 21-2 run of the Lady Eagles in the opening quarter.

Canisteo-Greenwood returns to their home floor on Friday with a 7 p.m. tip-off against Campbell-Savona.

WELLSVILLE — While Wellsville grabbed the early lead after a back and forth battle through the opening set to begin the night, the Rebels of Cuba-Rushford would shake it off and rebound with three straight victories in strong fashion, becoming the first team to reach 10 wins on the season with a four-set triumph over the Lions on Wednesday by a 20-25, 25-14, 25-17, 25-21 count.

Pacing the offense was Anderson Siegel and Max Hinckley for the Rebels (10-1), as they each garnered a team-high nine kills while Hinckley connected with four aces from the service line along the way. Setter Allen Fuller was up at the front of the net helping set everything up for the attack, dishing out 25 assists to pair with his four additional kills.

Both teams will occupy their home floors in their return to action at 6 p.m. on Friday, as Cuba-Rushford heads back home to welcome in Genesee Valley/Belfast, while Wellsville welcomes in Allegany-Limestone for a visit.

FILLMORE — The Eagles overcame being pushed to the brink by visiting Bolivar-Richburg after the first two sets of the night on Wednesday, but the Wolverines were able to finish off the victory before the hosts in black and green built momentum off the victory, as they rolled towards a four-set win in The Rock by a 25-20, 25-15, 19-25, 25-21 count.

The Wolverines (7-4) were led by Noah Little on offense, as he collected a game-high eight kills to go with two blocks and an ace. Following behind was Hunter Walp, who chipped in with six kills of his own to pair with two aces and two blocks, while setter Ian Unfus handed out 10 assists to pair with four blocks, two kills and two aces.

Both teams are back on the floor Friday night in a pair of 6 p.m. battles, as Bolivar-Richburg heads back home to host Arkport/Canaseraga, while Fillmore hits the road to visit Friendship/Scio.

ARKPORT — Host Arkport/Canaseraga controlled the play from start to finish on their home floor Wednesday night, as they fueled a straight-set victory over Genesee Valley/Belfast set up by a brilliant start, tallying a 25-13, 25-20, 25-12 win.

The Wolves (7-4) were led by Noah Drouin who had six aces, five kills and a block. Curtis Hartman chipped in with seven aces and two more kills.

Statistics for Genesee Valley/Belfast (4-7) were not provided upon publication.

Genesee Valley/Belfast continues their road swing on Friday with a 6 p.m. visit to Cuba-Rushford.