WELLSVILLE — In their last meeting, Leah Williams was the ultimate difference maker for the Lady Huskies of Olean, dropping a huge 36-point night in their five-point win over Wellsville just over two weeks ago.

This time around, the hope was to hold the Olean sharpshooter at bay in what would be their final battle on their home court for the year 2022. And it was one that came straight down to the wire.

The Lady Lions posted a strong start to open the festivities in the Lion’s Den, scoring an early lead that saw them connect with a big run against the Lady Huskies. With it in hand, it was now theirs to control. But from the second quarter onward, Olean was right on their trail each and every step of the way.

The hosts in white and orange were put on edge in the second half, having to battle alongside the Lady Huskies in efforts of warding them off. In the fourth quarter however, Olean would ultimately find and work their way to the top of the mountain. Leading the way was the same Lady Huskie who provided the firepower the last go-around.

The Olean sharpshooter, after being held to just two points across the entire first half, found a way to break open the game in the most crucial of times, using clutch shots from the field, as well as a massive tenure at the charity stripe to help pull away and out of reach of the Lady Lions down the stretch, finishing off what would be a season-series sweep with a 46-38 road win on Wednesday.

“We had good opportunities. I think in the third quarter, there were three possessions in a row where we turned the ball over each time. It was tough getting back into a rhythm, and that’s never good,” said Lady Lions coach Michelle Alvord. “In the fourth, we were out-rebounded with a pile of second chance points off them, as well as from the foul line. Williams is very good, and she made some big shots when they needed them the most.”

Despite the large 22-point quarter the Lady Huskies posted to fight their way back, the Lady Lions (3-4) started off the night on a brilliant note with the first six points off the hands of Makenna Dunbar, who had four, along with Lindsay Stuck. The start which featured plenty of defense underneath the basket, along with great ball movement off the transition, allowed Wellsville to start up a run that saw them net an early 13-6 lead.

Olean began to chip away at the deficit entering the second quarter led by a pair of nifty fingerrolls off the hand of Olivia Kratts to keep them within distance of the Lady Lions. With under a minute to go, the Lady Huskies would close the gap to three points after a long three-ball from Lexi Benjamin came in clutch, keeping the momentum in their favor, in the process.

In the third quarter, a defensive battle commenced. But it was a battle that Olean would maintain a fair amount of momentum to keep the pressure on Wellsville, carrying it into the last eight minutes of play.

The lead was in reach, and for the Lady Huskies, it was one that they were able to finally grab ahold of. Behind the rise of Leah Williams, Olean sprung ahead towards their first lead of the game behind their senior’s clutch fourth quarter. In all, Williams would post 14 of her game-high 18 points in the frame, including a dazzling 6-for-8 outing at the charity stripe in the game’s waning minutes to push their lead insurmountably while keeping Wellsville off the board.

“I feel better about this game, even though we lost, and it was by more points. But things continue to get better, and when we find a way to click, we have to sustain it for four quarters,” Alvord said. “Basketball is a game of runs, so that’s something that I know we’re going to have. We have to bounce back a little bit quicker.”

Leading the offense for the Lady Lions was Lindsay Stuck, Averee Palmatier and Makenna Dunbar, as they all recorded eight team-high points. Helping the cause was Emily Robbins, who had seven points, while Natalie Adams and Sara Reitz rounded off with five and two points, respectively.

On special teams, Dunbar led with 13 rebounds off the glass to go with five assists. Palmatier chipped in with four additional boards, while Adams and Reitz had three each.

Prior to the Varsity battle, the Wellsville JV Lady Lions closed out 2022 with a bang, as Caelyn Stevens and her team-high 10 points helped them stroll past Olean with a 40-16 win.

Wellsville will return to action after Christmas, next Wednesday night, as they travel to Bath to partake in the annual Coaches v. Cancer Tournament. The Lady Lions will help open up the two-day twinbill with a 7:15 p.m. first round battle against the host Lady Rams of Bath-Haverling.

“They’ve had some great games, and we’re more than familiar with what they have,” Alvord said. “They have two strong players leading the charge, including the (Meredith) Czajkowski girl. It will be nice to have a little break, and then come back to play in a great Coaches v. Cancer tournament they have up there.” 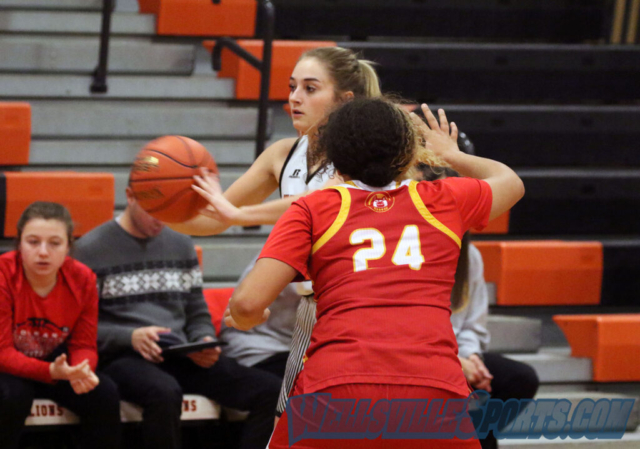 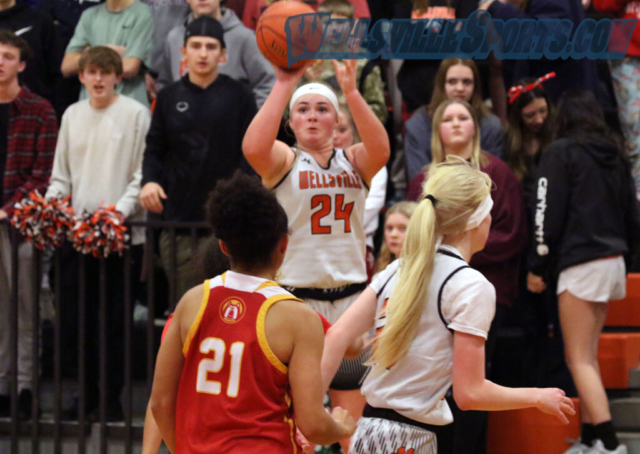 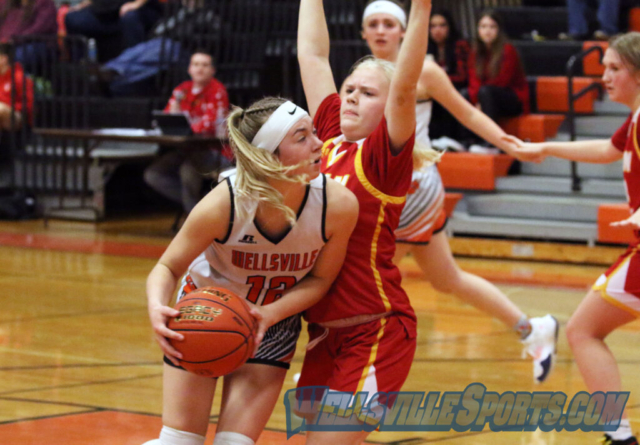 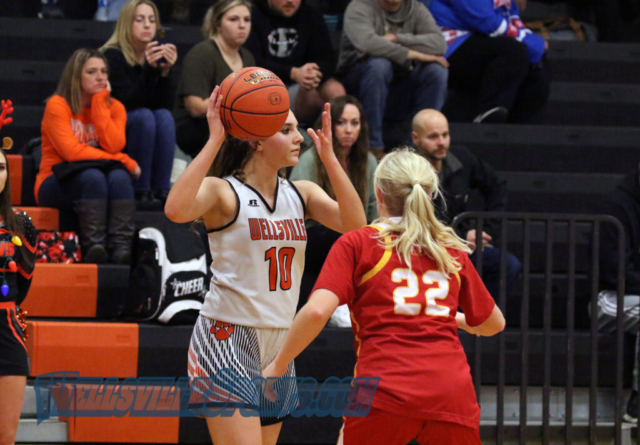 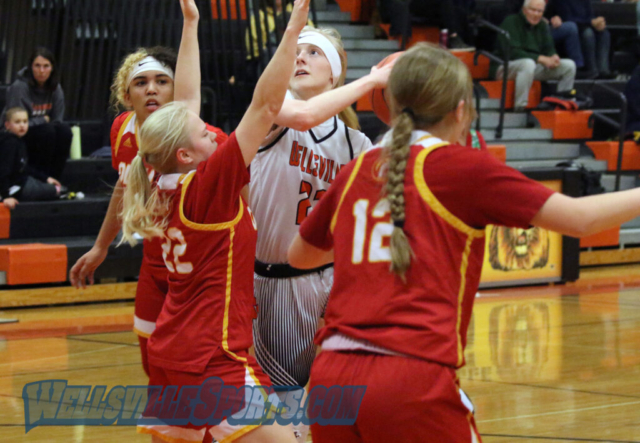 CANISTEO — The Lady Redskins of Canisteo-Greenwood were tested out of the gate by Addison on Wednesday, as both teams hung right with one another across the first half.

With the lead in hand going into the break, and the Lady Knights right on their trail, something had to give for the Lady Redskins to make sure they remained in the driver’s seat.

Fortunately enough, Peyton Peters was ready to deliver with a ton of firepower.

After giving the hosts in white and red the start they wanted on offense, the Canisteo-Greenwood junior added more fuel to the fire to start the second half, scoring nine of the team’s 16 points in the midst of their game-changing 16-8 run of Addison in the third quarter to ultimately pull away and out of reach, strolling towards their eighth straight victory to enter the Christmas break, in a 48-29 win.

Peters finished with a game-high 18 points to pair alongside seven rebounds to pace the Lady Redskins (8-0) offense, which was able to start off on the right foot with an early 12-8 lead paced by Peters’ nine points from the field and at the stripe. It was a lead that the hosts were able to hold through a defensive second quarter battle before the offense re-ignited to open the second half.

The eight-point lead they held was extended upon in the third with Peters firing on all cylinders one more time with her last strand of nine points propelling Canisteo-Greenwood towards a 16-8 doubling up of Addison to garner all the room they needed to pull away towards victory for the eighth consecutive time to enter the Christmas break perfect.

Finishing behind Peters in scoring was Lillian Mullen, who had 10 points to go with eight rebounds. Brooke Burd chipped in with nine points and six rebounds, while Elaine Roach added more help off the glass with seven boards of her own.

Canisteo-Greenwood will return to action after the New Year, as they prepare for a 7 p.m. road trip to visit the Dansville Lady Mustangs on January 3.

FILLMORE — Despite a pair of forfeit wins being awarded to host Fillmore/Keshequa to open the battle on Wednesday, Avoca/Prattsburgh buckled in and delivered a magnificent performance behind seven overall victories on the mat, as the Titans soared their way towards victory over the road by a 40-30 count in Fillmore.

Fillmore/Keshequa led off the night with back-to-back forfeit wins at 189 and 215 pounds, with Gage Hartman and David Bower taking each decision, respectively. In between two more forfeit wins was the team’s lone win in competition, as Alivia Cartwright battled right down to the wire with Avoca/Prattsburgh’s Devin Stamets, finding her way towards a pinfall win with nearly a minute left in the final period.

Graham Howe (110 pounds) and Ryan Vedder (132 pounds) chipped in with the team’s remaining triumphs, both via forfeit.

“Liv wrestled really well for us tonight,” said Fillmore/Keshequa coach Jarrett Vosburg. “Some others wrestled well, but we just came up a bit short in the experience column. We are still moving in the right direction in a season that’s all about making improvement. We’ll take a break for the holiday weekend, and then get ready for another set of challenges that lie ahead next week at Bolivar-Richburg.”

Fillmore/Keshequa will now get set for action over the holiday break, as they pay a visit to Bolivar-Richburg to partake in the annual Wolverine Scuffle Dual Tournament, which begins next Wednesday afternoon at 1 p.m.

The team will return to regular season action on January 3, when they visit Alfred-Almond at 6 p.m.