WELLSVILLE — The comeback is always greater than the setback.

For Wellsville, that goal was posed on Friday when they took aim at a big bounce back after they finished their five-game road stand in Dansville earlier this week. Now, the spotlight was on the Lions Den for the first time this season as the Lions opened up their home slate with a Section VI superpower in town for a visit — the Portville Lady Panthers.

Against such an opponent, the Lions would need to act quickly. Fortunately enough, that would come right off the opening tip.

The balanced attack for Wellsville came through once again to set the pace against the Panthers, as multiple Lions all had a hand in giving the offense the quick start they needed, building on it across the first half and beyond, as they hopped back up to .500 through the first six games with a 52-25 home victory.

“Obviously, we took a lot of positives away from the game in Dansville,” said Lions coach Michelle Alvord. “The importance of bouncing back allowed us to play harder, and tonight, it went our way. I told them after the game that I was pleased with the balance we had across the board with our hustle and effort. Playing on our home floor was really nice after two weeks away to start the season. We just have to build upon it, and keep grinding every day we go out and work.”

The Lions (3-3) were on it right away, as they started a red hot run against Portville that continued to reverberate as time went on. After Makenna Dunbar started with the first four points for the hosts in white and orange, the damage being dealt to the Panthers would gradually increase. With a slew of Wellsville shooters all helping the cause with scores of their own, the all-out balanced attack would help produce a 16-8 lead after the first — a run that included 13 of the first 15 points going in their favor.

Then, a defensive battle through the majority of the second quarter would begin to settle in. Each team would trade a basket within the team’s first few minutes before the Lady Lions found a way to break down the door with another strong finish to close up the first half, as Maddy Parks, Natalie Adams and Averee Palmatier all had a hand in the action to record a 10-3 run that saw them ultimately push their lead out insurmountably going into the second half.

Dunbar and Adams both led the Wellsville offense with 24 of the team’s 52 total points, as Dunbar tallied a game-high 13 points to go with nine rebounds and three assists, while Adams collected 11 more points to pair with five rebounds. Parks, Palmatier and Emily Robbins all chipped in with six points.

Some more special teams help was added along the way, as Palmatier grabbed seven rebounds while Edahlia Sebastian had four of her own off the glass to contribute.

Prior to the Varsity battle, a thrilling JV contest was put on full display in a game that saw an extra four minutes decide it all in the end. With the Lions right on their trail, Portville was able to hold off the late pressure in favor of a 30-29 win in overtime. Caelyn Stevens led all Wellsville scorers with 13 team-high points.

The Lions are back on their home floor for the final time this calendar year on Wednesday, as they get set to host the Olean Lady Huskies in a 7:30 p.m. contest. 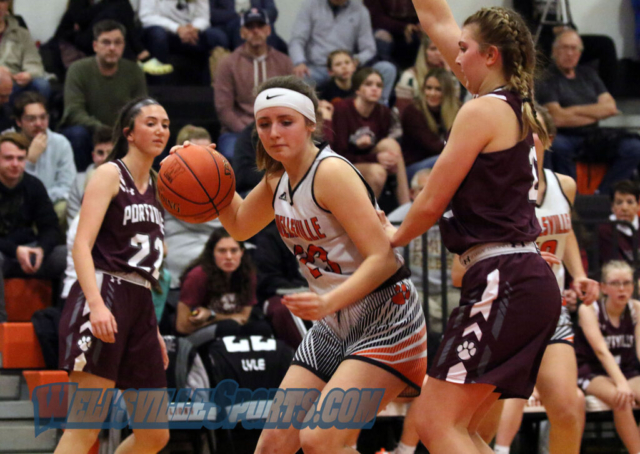 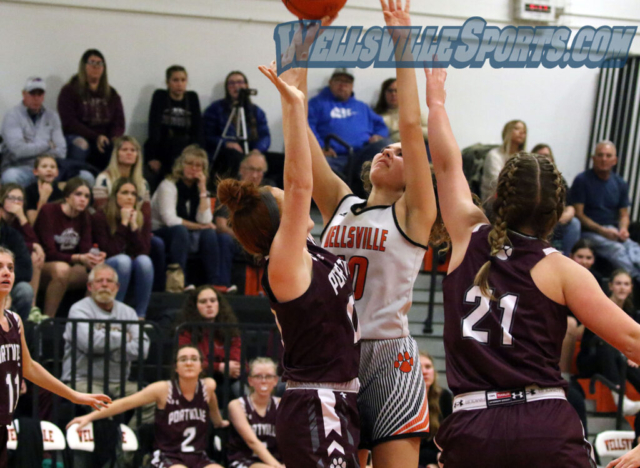 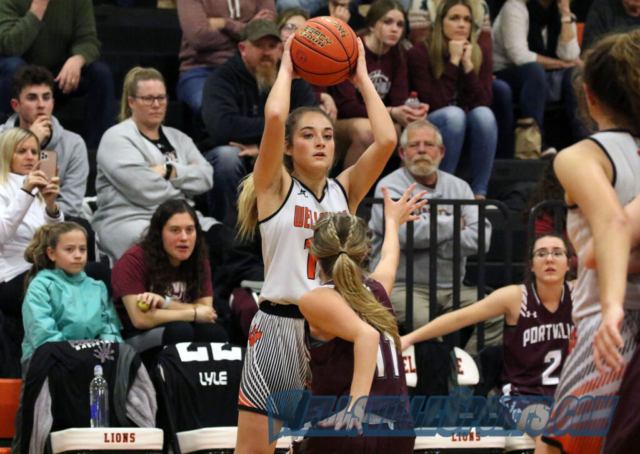 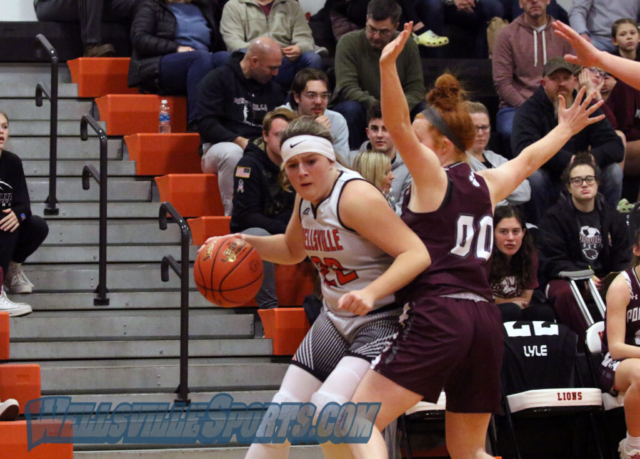 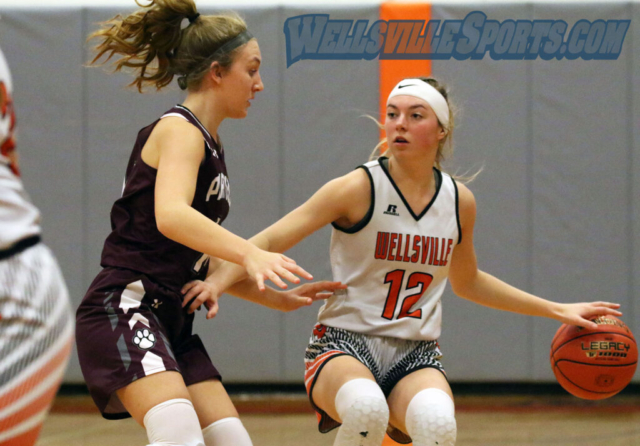 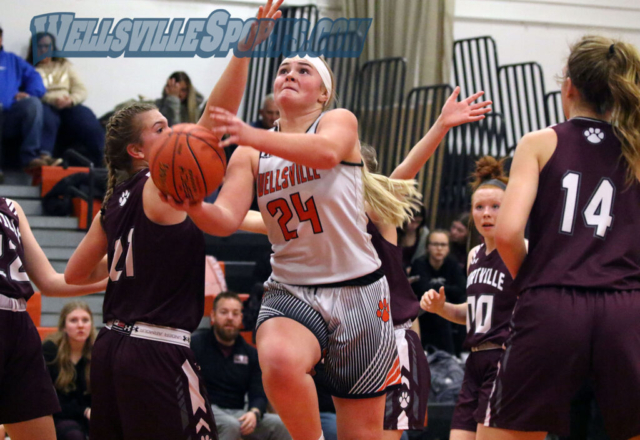 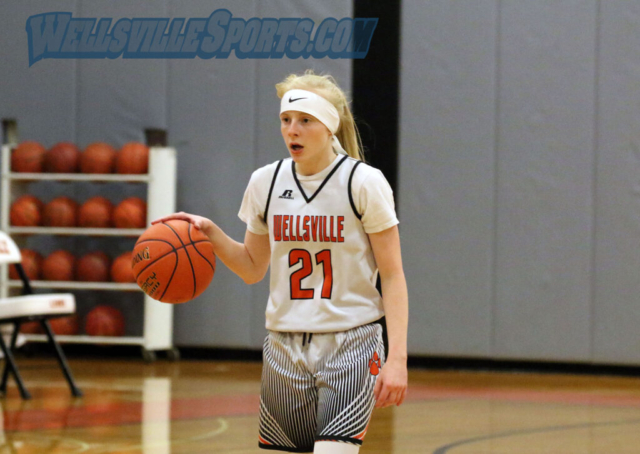 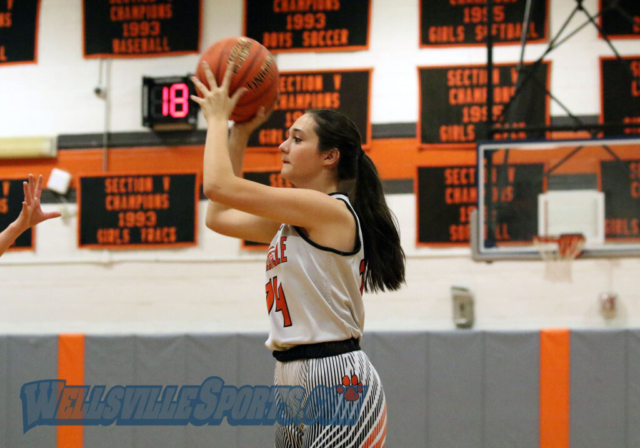 BOLIVAR — Through some balanced efforts across the board during the game’s opening eight minute period, both Cuba-Rushford and Bolivar-Richburg worked their way towards an early tie.

But then, the Lady Rebels saw an opening. It was then exploited by Taylor Searle and her dominant outing in the second quarter, as the visitors in gray and blue used a momentous 14-2 run to pull their way ahead of the Lady Wolverines, ultimately for good, as they squeezed their way towards victory — their fourth straight, by a 39-27 edge on Friday.

Searle went on to lead the Lady Rebels (4-3) with a game-high 13 points, 10 of those which also included a pair of big three-pointers, came in the team’s 14-point second quarter to help set up shop with a big lead going into the second half.

The second half was a balanced scoring affair between both teams, as Cuba-Rushford used it to their advantage to keep their lead intact going down the homestretch, and towards ultimate victory at the end of the game.

Finishing behind Searle was Cloey Larabee and Shae Maples, as both Lady Rebels contributed five points. For the Lady Wolverines (3-3), Caitlyn Steiner and her team-high 12 points. Malayna Ayers chipped in with six points, while Carmen Crowley had four of her own to add.

Both teams are now off until after the Christmas break, as Cuba-Rushford will look to record their fifth straight win back on their home floor on January 3, as they host the Lady Lions of Wellsville in a 7:30 p.m. clash, while Bolivar-Richburg partakes in their final battle before the holiday freeze with a 6 p.m. home battle on Monday against Archbishop Walsh.

FRANKLINVILLE — It was a tight battle for all involved, but at the end of the game, New Life Christian was able to hang on by the slimmest of margins against Genesee Valley/Belfast, edging out the 36-34 win on Friday.

To round off the girls side of the evening, host Franklinville capitalized on a massive start against the Lady Bobcats of Hinsdale, recording an advantageous first half of play to set the tone immediately in what was a 65-17 win to claim their spot in the Championship round of their home tournament.

Stats and a complete box score for both games were not made available to report upon publication.

Genesee Valley/Belfast (2-3) and Hinsdale (0-6) will both clash in the Consolation round of the tournament, which gets underway this morning right back in Franklinville. Tip-off is slated for a 10 a.m. start.

GREENWOOD — The Lady Redskins of Canisteo-Greenwood were hot right off the hop in their return to the hardwood on Friday. After over a week away, they made sure the wait was worth it, as they unleashed a humongous first quarter against host Jasper-Troupsburg and never looked back from it to lock up a 54-25 victory just down the road from home, in Greenwood.

No time was wasted on getting the start that Canisteo-Greenwood (6-0) would deliver with in the opening eight minutes, as they struck all chords on both ends of the floor against the Lady Wildcats behind what was a 21-4 lead that they never looked back from. The team would go on to record a strong outing on defense the rest of the way, holding Jasper-Troupsburg below 10 points in all four quarters to help secure the win.

Leading the charge on the attack for the Lady Redskins was Lillian Mullen, who tallied a game-high 18 points. Brooke Burd followed behind with 11 points of her own, while Bailey Mullen chipped in with seven.

Canisteo-Greenwood will now hit the road for a trip just 10 minutes across the way, as they get set for a colossal meeting of the titans with the Lady Red Raiders of Hornell after the weekend, beginning at 7 p.m. on Monday.

BELMONT — Four different scorers propelled the Eagles of Fillmore to big success. After a tough defeat to the hands of Wellsville in the IAABO Tournament title game last weekend, they bounced back in a big way with the strongest of first halves against host Genesee Valley/Belfast on Friday, roaring their way towards a triumphant 76-34 decision behind a pair of quarters fueled by at least 25 points.

Fillmore (3-1) started the evening off in the Jungle on the strongest of notes, as they brought the hammer down almost immediately with their biggest frame of the night — a 28-10 run through the opening eight minutes to grab a lead they would never lose. To finish the second half, a quarter of similar stature was recorded one more time by the Eagles, as they continued to add more cushioning to their lead along the way.

Among the four scorers who had a big hand in the Eagles attack was Jair Bialek, who recorded a game-high 19 points. Jack Cool followed closely behind with a breakout performance of his own, netting 17 points. Zach Sisson tallied 12 points, while Mitch Ward rounded off with 10 points of his own. Both Bialek and Cool combined to record six of Fillmore’s nine three-pointers from downtown.

Genesee Valley/Belfast (4-3) was paced by a 17-point night from Jacob Borden, as they now prepare for a first round battle with Cuba-Rushford in the annual Scio Christmas Tournament beginning after the holiday, on December 28 at 6 p.m.

The Eagles head back home to welcome in the Franklinville Panthers for a 7:30 p.m. visit on Monday.

BELMONT — The Rebels of Cuba-Rushford remained on fire to open their County title defense on Friday. After a neck-and-neck battle with host Genesee Valley/Belfast in the opening set, the visitors in blue would shut the door from that point forward, as they went on to edge their way towards a tough, straight-set finish by a 26-24, 25-20, 25-18 count.

Haven Kellogg had a strong night on offense to lead the Rebels (5-0), as he helped set the offense up while providing some of his own magic to record an 11-kill, 11-assist game to pair with his one ace from the service line. Anderson Siegel furthered the team’s cause even more with nine additional kills on offense, while setter Allen Fuller dished out 10 more assists to go with three kills and two aces.

For Genesee Valley/Belfast (2-3), Canaan Sullivan paced the attack with five kills and two digs on defense. Up front, Jackson Stout tallied five blocks to go with a pair of kills, while setter Dominic Marra handed out 12 assists to couple alongside three more kills and one block. The team will close out the 2022 calendar year with a Monday night battle on the road with Friendship/Scio, beginning at 6 p.m. on Wednesday.

Cuba-Rushford will take aim at a potential sixth straight win come Monday night, when they head back home to host Arkport/Canaseraga in a 6 p.m. first serve.

FILLMORE — With one more game after Friday night before the Christmas break officially starts to freeze the action until the new year, Friendship/Scio would not wait any longer to receive their first win, as they fought through an opening set battle with host Fillmore and used its momentum to build a straight-set win over the road, earning the 25-21, 25-19, 25-17 victory.

“I am really proud of our guys tonight. They put so many pieces together that we’ve been working so hard on in practice,” said Friendship/Scio coach Alicia Mucher. “I am happy that they were able to get a win from it. They deserved it. I’m looking forward to building on the strides they’ve been making in the last week as a team.”

The season’s first win for Friendship/Scio (1-4) was led by Jordan White on offense, as he produced five kills to pair with his team-leading 12 service points. Max Morris furthered the team’s cause with three more kills of his own along with a block at the front, coupling them alongside 10 more service points. Lawson Ector rounded off with eight helpers, and one kill.

On the other side of the net, Fillmore (1-5) was led by Aiden Wagner, who had 10 service points to pair with his three aces from the back line.

Friendship/Scio will remain at home for their final game before the Christmas break, as they take on Genesee Valley/Belfast in a 6 p.m. first serve on Wednesday. As for the Eagles, they hit the road themselves after the weekend for a 6 p.m. visit to Wellsville on Monday.