BELMONT — Over the course of the past week on the soccer field, history was being re-written. Recently, it was the Fillmore Eagles saw two of their star-studded playmakers — Mitch Ward and Hope Russell, find the school’s record books by becoming members of the all-exclusive 100 career goal club, along with Ward earning the prestigious all-time leading scorer hallmark for the boys soccer program in addition.

With the final two days of action now in effect and the Sectional tournament more than within view, an opportunity for some more history to be re-written presented itself at Judy Bliven Field in Belmont, Thursday night in the final game of both Bolivar-Richburg and Genesee Valley/Belfast’s regular season.

Last time, it was a 1-1 tie through a wire-to-wire, close encounter in Bolivar. This time, the Wolverines would have the first and only say.

Despite being outshot by a 14-10 count, they were the first to find an opening on the field, as Ryder Easton and Reiss Gaines helped Bolivar-Richburg earn a big leap forward into the driver’s seat with their first half goals. With it, a creation of a lead that Genesee Valley/Belfast could not chip away at, garnering their fifth win in the final six games to head into Sectionals strong behind their 3-0 shutout on the road.

With the victory, the Wolverines would make program history with a record of 13-2-1 overall heading into Sectionals next week — a mark that now stands alone as the single-best ever, with a chance to lock up a Top-3 seed in the Class C2 Tournament now in sight.

“This was a great team effort by the team tonight. All of the boys played really well together, and we put the ‘we’ before the ‘me’. I am so happy for the effort we put in, to come away with some of the best soccer this program has ever had. We are really excited to see what comes next for us, next week.” said Wolverines coach Mike Zilker.

The momentum swing for the Wolverines (13-2-1) offense was shifted into their favor after a fiery start to their game in the first five minutes, bolting into the Genesee Valley/Belfast zone with a pair of corner kicks, one of them being fired in on goal from Ryder Easton that would see the head of Reiss Gaines in front, but would sail high over top and wide.

At the 22:01 mark, the visitors in white and red would ultimately find their way onto the board led by a rush into the offensive zone by Easton in the right wing after taking a pass from Landon Barkley near center. Easton then took a sharp turn inside towards the Genesee Valley/Belfast (6-6-4) net and fired his shot over top of Thai Norasethaporn in goal, and into the net to break the ice.

Almost immediately after the Bolivar-Richburg goal, the hosts in black and white would provide their best chance of the night.

On a miscue from Caden Gaines in the back. After an attempt to trap the ball in front of him to keep it from reaching the defensive zone, Evan Turybury ran his way through it and made a break for the goal. With a pair of defenders giving chase behind him and David Abdo leaving the cage to challenge, Turybury would fire off a shot that was inches away from going in to tie the game.

That would ultimately lead towards Bolivar-Richburg extended their lead right before the half was closed up, as Gaines connected on a massive piece of early insurance off a quick give-and-go play in front of the net alongside Noah Little with 6:21 left on the clock, rocketing his shot straight towards the near post.

With the lead in their hands, the Wolverines would control their own destiny. While the defense was warding off the Genesee Valley/Belfast offense, in turn, an attack of their own would formulate one last time with nearly 10 minutes left to play when Little connected on a goal of his own off a pass dished along by Aydin Sisson to cap off the shutout victory.

“We outshot them, but we just couldn’t finish the ball. When they were able to get chances, they capitalized on them and it really showed,” said GV/Belfast coach Mark Sullivan. “David Baldwin was an absolute animal out there for them, and he is easily their best defender on the field. He owns every ball, and especially tonight. He’s big, fast, he kicks and goes through the ball. He’s an all-around great player. I tip my hat to Bolivar. They’re a great team, and they’re the real deal.”

Abdo would record the win in net for Bolivar-Richburg, stopping all 14 shots to earn the shutout. On the other end, Norasethaporn made seven saves for Genesee Valley/Belfast.

Both teams will now await their fate for the second season through the Sectional seeding process, which will begin this weekend.

SCIO — Although the first half was one that did not have any capitalizations on offense between both Andover/Whitesville and Friendship/Scio, there was still a second half left to be played on Thursday.

And it was one that Friendship/Scio made sure they did not let slip away.

The hosts provided an all-out barrage in the second half to keep themselves distanced from Andover/Whitesville’s grasp, finding the back of the net three times in a span of seven minutes to set up shop for what came to be — a 3-0 shutout to end their regular season on a highest of notes going into the Sectional tournament next week.

“In the first half, we were a bit sluggish, but we were able to pick it up,” said Friendship/Scio co-coach Dillon McFall. “We were fired up for the second half, especially on defense. From the halfbacks forward, we played fast and we had some great movement without possessing the ball. Those are the kind of things that we hadn’t seen much of this year. Tonight, it was nice to see the guys actually capitalize on their chances because of it.”

Three goals would come just past the 10 minute mark of the second half, after both Andover/Whitesville and Friendship/Scio (6-9-1) fought all throughout the midfield in the opening 40 minute period of play. The hosts would come out swinging for the fences with not one nor two, but three goals in a span of seven minutes beginning with Brenden Loucks at the 29:47 mark.

A short time later, Friendship/Scio’s lead would grow to two with Ethan Davenport finding his way past the Andover/Whitesville (1-15) defense for a goal of his own. Finishing off the victory was one final piece of insurance off the leg of Jordan White, who found the back of the net with 22:49 left to play in the battle. The three goals would come on 15 total shots against the visitors, while the defense allowed just one back down the field.

Taylor Moore would record that save for Friendship/Scio to pick up the shutout, while Landon Ordway made 12 saves for Andover/Whitesville.

The regular season is over for both teams, as they now await Sectional seeding this weekend.

HINSDALE — Previously, it was the Panthers of Houghton Academy who took over the show completely back on their home turf against Hinsdale in the midst of some of their best soccer of the season. When the two teams came together once more, it was the Bobcats turn to give them everything they had.

On Senior Night, the hosts would do just that by pushing Houghton Academy to their limits. Both teams would score just once across all 100 minutes that were played up and down the field on the final night of the regular season, as their finale would end in their first tie — a 1-1 draw.

In-depth statistics were not made available to report upon publication.

Both Houghton Academy (10-5-1) and Hinsdale (6-8-1) will now await Sectional seeding, which begins this weekend.

CUBA — The regular season for the Eagles of Fillmore would reach its conclusion on back-to-back nights over the road, beginning on Thursday with a stop to Cuba-Rushford before heading off to Wellsville on Friday.

With a pair of stepping stones left to traverse on their path towards an unbeaten regular season going into Sectionals, the Eagles would pick up where they would leave off from their big shutout win over C.G. Finney back on Monday, using a five-goal first half to their advantage to score a 7-2 win over the Rebels.

Between the two foes across the first 10 minutes, three goals would find their way into the back of the net, with Fillmore (15-0) scoring a 2-1 lead on Cuba-Rushford paid in part by Layton Sanasith, connecting with his scores in the first minute and later in the 8th minute off helpers from both Brent Zubikowski and Eben Schilke to break the ice.

The Rebels (3-12) a short time later after Sanasith’s second, would cut their deficit in half with assistance from Will Adams and his unassisted marker. That would be all for the hosts in blue and white in the first 40 minute segment, as the Eagles went on to score three more unanswered goals to close out the half with a 5-1 lead.

Schilke, Zach Sisson and Mitch Ward all had a hand in the offensive efforts for the visitors in white and green, with Sisson and Ward closing out the half with back-to-back goals in nearly a five-minute span. Beforehand, Ward would hand out a helper to Schilke on his goal in the 15th minute.

The scoring would wrap up with Cuba-Rushford’s final tally stemming off a play beginning with Kaden Bell and ending with a rush into the Fillmore zone by Jacob Smith just four minutes off the opening kick in the second half. Just as quick as the Rebels got on the board, the Eagles responded by earning that goal back again with Ward’s second of the game.

Jack Cool would score Fillmore’s final goal in the 62nd minute off a Zach Sisson helper to finish off the victory, which saw the offense compile 21 total shots. The Eagles would outshoot Cuba-Rushford by a 21-4 total count, with Luke Colombo earning the win behind his two saves. On the other end, Jack Frank would make 14 saves.

The regular season for Fillmore will come to a close tonight in Wellsville, beginning in a 4:30 p.m. first kick, while Cuba-Rushford now awaits Sectional seeding this weekend after concluding with a record of 3-12 overall. 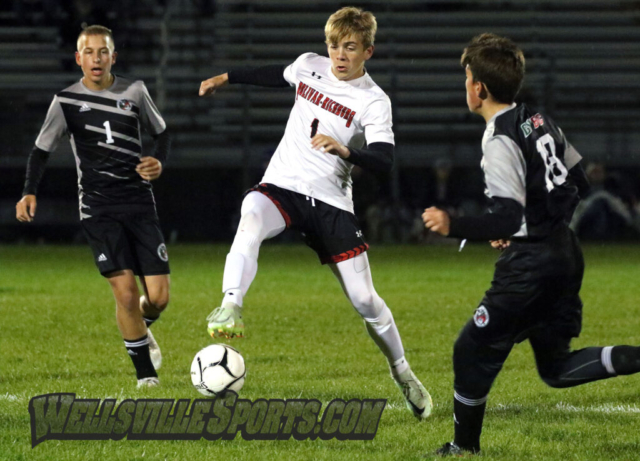 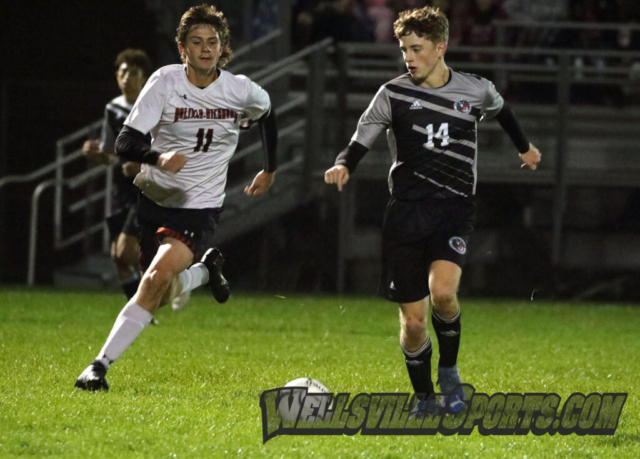 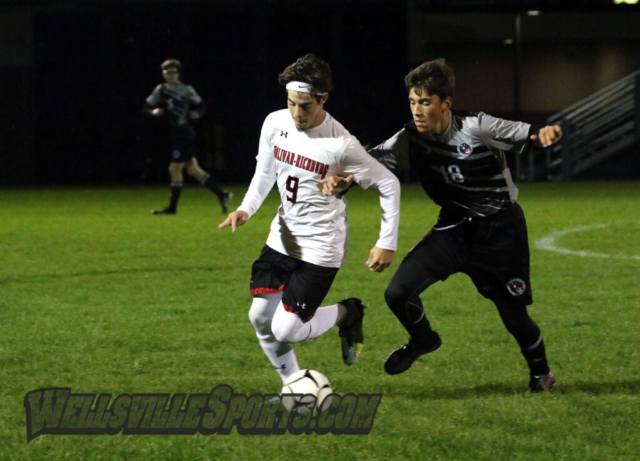 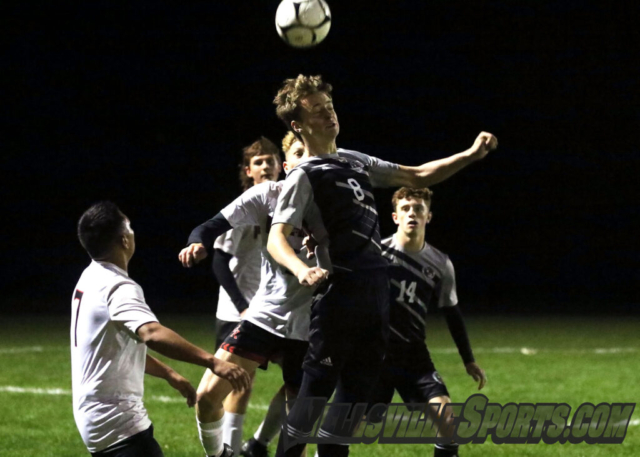 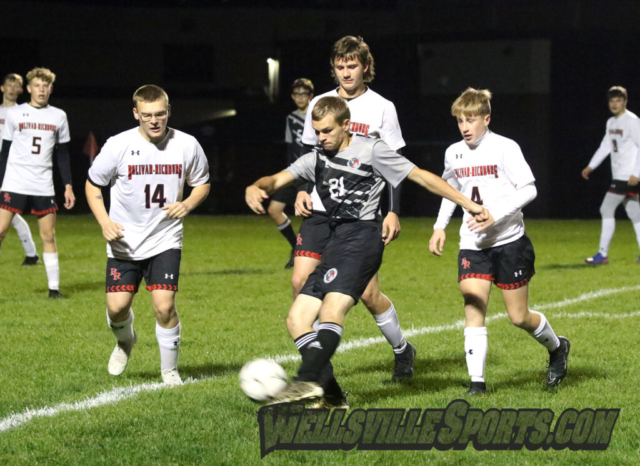 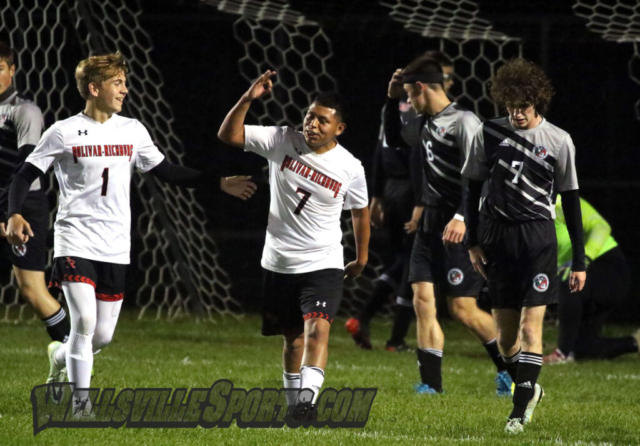 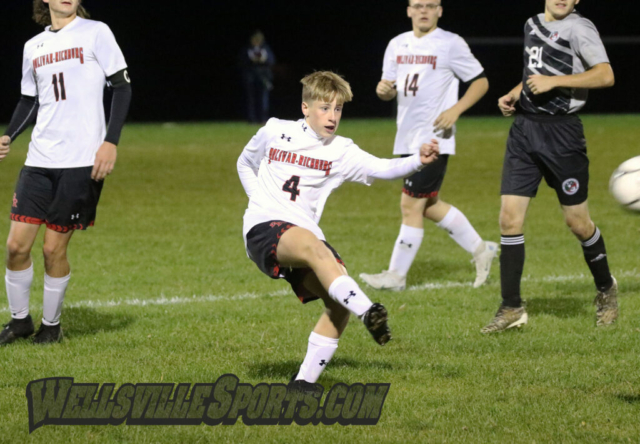 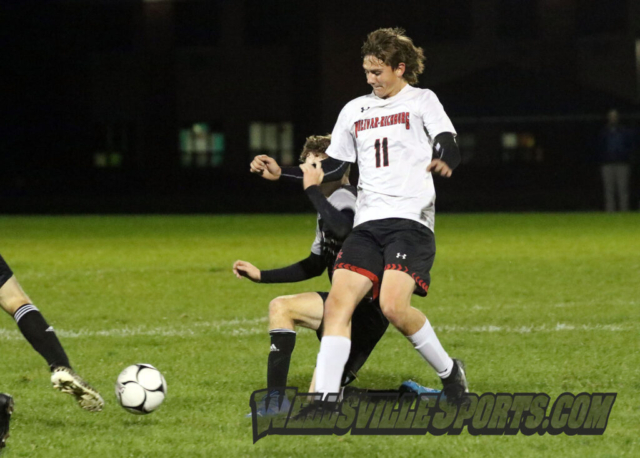 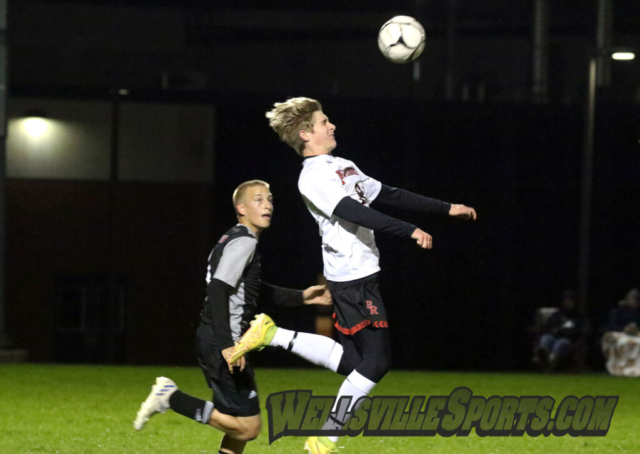