WELLSVILLE — It was a midfield battle that would last almost the entire game. On a gorgeous Tuesday evening for some soccer to be played, it would be the only time that Wellsville and Andover/Whitesville girls soccer would go toe-to-toe this season.

And what a game it was.

With a scoreless tie in the books through the first 40 minutes, the next half and beyond brought even more excitement, and maybe a time or two where you would find yourself on the edge of your seat. More of that same feeling would reverberate into nearly 20 minutes of extra time after regulation met its end with a tie still on the board needing to be broken.

Both squads entering the night were still searching for their first win of the season, and with three minutes left in double overtime, the Lions would make sure that they did not have to wait any longer for it.

A mad scramble in front of the Andover/Whitesville goal would develop, as the Wellsville offense intercepted a clear just outside of the 18. It would present an opportunity for an odd rush back into the zone, with a shot creating a back-spinning rebound towards the empty goal. One that Morgan Spicer would rush in and knock home without hesitation and all the pressure parked out front, as Wellsville collected their first win of the season with a 2-1 victory on their home turf.

Before the Lions (1-6-1) had to work through some late game heroics to earn the win, they would have to outlast Andover/Whitesville across a first half midfield battle to set up shop for quick beginnings in the next, as they were the first team to strike in the second half just six minutes in. Garnering that strike was Ayla Faulkner from deep, as she received the ball from 15 yards out, sailing a sharp angle shot in on goal, over the head of Olivia Waters and in to the left side to break the ice.,

The lead would hold for just a while longer before Andover/Whitesville (0-6-1) would find their way onto the board to tie the game up at one with a Maddi Barona-Aiala cross from the left wing working its way out to the front of the Wellsville cage, where a streaking Kennedy Bledsoe would meet the ball on the break, scoring it to the far post on the right side at the 18:29 mark to deadlock the game going forward.

Extra time would come and go all throughout the two overtime sessions before the Lions would find a way to end it with Spicer’s massive game-winner with 3:42 left remaining in double overtime, as Kaylie Fuller helped set up the play with a hard-hit initial shot against Waters — one that would take a direct hit off her mitts, and back towards the goal where Spicer would fly in and hit the empty net through a pair of defenders out front to end the game.

The game saw both Wellsville and Andover/Whitesville combine for 27 total shots on the attack, with the visitors holding a 17-10 advantage at game’s end. But it was Makenna Dunbar that would pick up the victory in between the posts, as the Lady Lions keeper made 16 saves, while Waters made eight for Andover/Whitesville.

Both teams are back in action over the road Thursday night, as Wellsville looks to shift the momentum into their 6:30 p.m. contest against the Bath-Haverling Lady Rams, while Andover/Whitesville aims to rebound in their 5 p.m. first kick at Cuba-Rushford.

TROUPSBURG — The Genesee Valley/Belfast girls soccer team produced a large amount of fire across the field over the road on Tuesday, launching shots one after another at the Jasper-Troupsburg net. Fortunately for the Wildcats, they were up for the challenge on defense.

As for their offense, consistency would pay a ton of dividends.

The Lady Wildcats used their consistency to their advantage. With the door beginning to close in the second half, they would open it back up again with the game’s lone goal — one of just two shots recorded in the entire 80 minute contest, as they held on all the way until the end to pick up the 1-0 shutout at home.

Emily McCaig was responsible for giving Jasper-Troupsburg the victory during the early stages of the second half, finding the back of the net on a solo rush into the Genesee Valley/Belfast (5-2) net just over six minutes after the kick at center to give them a lead that was threatened, but never lost to secure the win.

Despite the loss, Genesee Valley/Belfast heavily outshot the Lady Wildcats by a 15-2 total count. All 15 saves were stopped by Kahley Stewart in between the posts for the hosts, while Ashley Burrows made one stop on the other end for the visitors.

Up next for Genesee Valley/Belfast is a trip back home on Thursday, as they prepare to welcome in Friendship/Scio for a 7 p.m. battle in Belfast.

BOLIVAR — The Fillmore girls’ soccer team continued to play at the top of their game on Tuesday, rolling out a fast start against host Bolivar-Richburg and never looking back from it, as they picked up their seventh straight win to open up the season by a 6-1 count over the road at Dunsmore-Latimer Field.

Out of the six goals scored by the Eagles (7-0), four of them were posted in the first half of play with the opener being scored just six minutes in off a penalty kick opportunity. Electing to take the shot was Hope Russell, who wasted no time scoring it to the right side of the Bolivar-Richburg cage to break the ice.

A midfield battle would develop from that point until the Lady Wolverines (4-5) navigated their way onto the board to tie the game past midway, as Madigan Harris finished off a direct kick in front of the Fillmore goal launched in by Allison Zilker at the 14:10 mark. It would remain deadlocked at one on each side until the Eagles went on the fast break.

Three goals in the last nine minutes of the half would reach the back of the net for the Eagles, with their go-ahead tally stemming from a Grace Russell send in to Delaney Hillman who stood 20 yards out from the net, sailing a shot straight in on goal and into the net at the 9:05 mark.

On the next two goals, Grace and Hope Russell would have a hand in the scoring themselves, interchanging on the team’s third and fourth goals to close out a raucous final sequence to the first half.

The Lady Eagles added to their lead two more times in the first 10 minutes of the second half to close up shop, scoring both goals in a 49-second span with Malory DeRock capitalizing off a rebound off the goal post, while Hope Russell scored her third goal of the game off an Allison Mills send into the offensive zone a short time later. The team would collect 16 shots on offense, while holding the Wolverines to just two in return on defense.

In goal, Preslee Miller made one stop to record the win, while Malayna Ayers made 10 stops for the Wolverines. 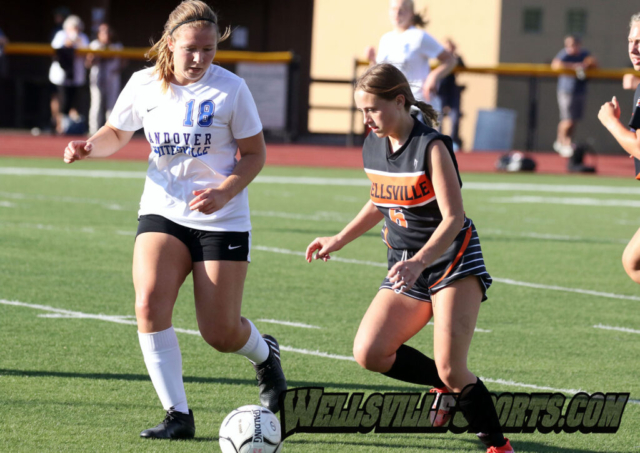 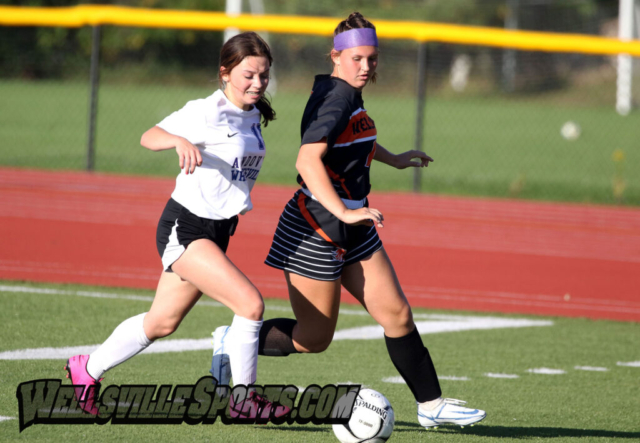 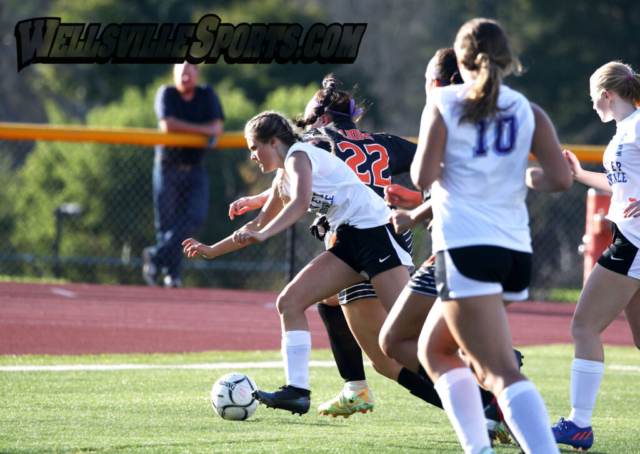 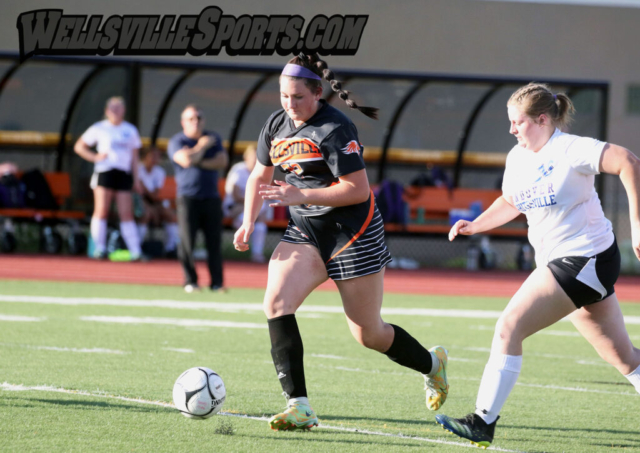 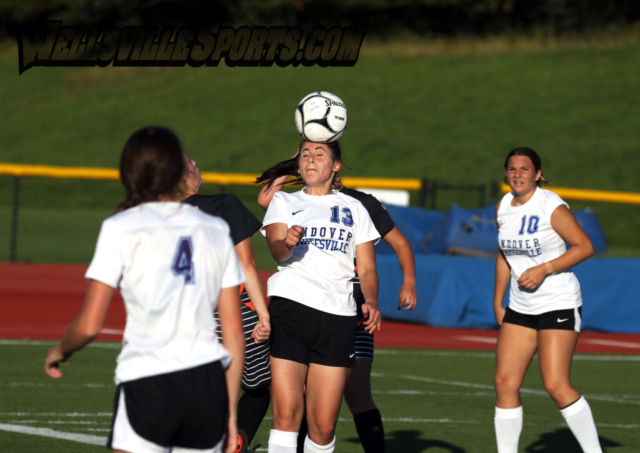 No paywalls or subscriptions for this local news