BELFAST — After the boys tournament kicked off just 24 hours prior, it was time for four more teams to do battle from within the girls soccer realm on another gorgeous night for soccer in Belfast.

The action across the board went deep into the night on Thursday, and that came from a back-and-forth battle exchanged between both Friendship/Scio and Andover/Whitesville to begin the festivities. A game that saw just two goals come in the first 40 minutes, and then a defensive midfield battle for the remainder of the evening.

After it was all said and done, both teams would settle on the season’s first tie by a 1-1 count, but would determine who would advance into the Championship round through an extra session of penalty kicks.

One more goal was collected during the final bout, and it was scored by Kennedy Bledsoe, as she helped Andover/Whitesville secure one of two spot’s in Saturday night’s title game with her game-winning kick.

“The effort tonight from the girls was really good,” said Andover/Whitesville co-coach Aaron Rawady. “We allowed them very few goal scoring opportunities and we were able to create a good amount for ourselves. The execution unfortunately, just wasn’t there. But with this being our first game of the season, it’s expected at this point.”

Through the first 20 minutes of the opening half, both teams engaged in a midfield battle up and down the field. That was until Andover/Whitesville (0-0-1) managed to find an opening in the Friendship/Scio defense to make a play happen. Ava Grice and Gabby Terhune set up shop right at the midway mark to give the team the lead, as Terhune fed across a pass to Grice to finish off for the game’s first lead.

In the waning minutes before the break, Friendship/Scio (0-0-1) was able to come up with a response of their own, converting a chance off an own-goal from the Andover/Whitesville defense. Lexi Crossley was credited with the team’s first goal of the season with five minutes left.

The score would remain tied at one all the way to the end of the battle, when the action shifted into the penalty kick stage where just one conversion was successful. That belonged to Andover/Whitesville’s hero in Bledsoe, as the senior sent the team into this weekend’s title game with her marker.

Andover/Whitesville outshot Friendship/Scio by a 20-4 margin, with Olivia Waters recording three stops for the victors. On the other side, Nevaeh Ross and Grace Drumm combined to put a stop to 15 shots.

In game two, a different story.

Avoca/Prattsburgh and Genesee Valley/Belfast put together a solid first half showing on defense primarily. But perhaps the x-factor, the Lady Titans could not find a response for. The connection of Hannah Southwick-Powers and Anna Drozdowski for the United squad propelled a pair of goals into the back of the net, including the game’s first just seven minutes in to break the ice on what was a 3-0 blank to earn the final spot in the Championship round.

“This was a great opening match for us. Great defense was played by all, which certainly helps and we had some great connections too up top,” said Genesee Valley/Belfast co-coach Lisa Scott-Schneider. “It’s a good starting point, and we need to improve in some areas. It’s certainly nice to find the back of the net early, which helps the mental aspect of things. Hannah had some nice footwork all night, and Harley notched a beautiful ball in the box. It was a great team effort all around, and we’re looking forward to Saturday. The first goal for the ladies was to win their home tournament. They’re one step away from it.”

The first Drozdowski-to-Southwick-Powers combination ignited in the first 10 minutes of play for Genesee Valley/Belfast (1-0), one that would help garner the early edge on Avoca/Prattsburgh. It was a lead that they were able to hold, and build on coming back out for the second half, when Harley Proctor continued the quick pace of action with a goal of her own in the first 10 minutes.

Proctor would pick up a pass from Whitney Young on her way in towards the Lady Titans goal, airlifting a shot directly on goal from just inside the box to branch out the lead for the hosts to a crucial pair. The finishing touches were put on by the last Southwick-Powers/Drozdowski connection through another battle across the midfield, as Southwick-Powers scored her second of the game with 4:32 left to play to insurmountably push the team’s lead away and out of reach of Avoca/Prattsburgh to secure their place in the Championship round.

Genesee Valley/Belfast collected 11 total shots on goal compared to Avoca/Prattsburgh’s two, which would result in Ashley Burrows being credited with the first shutout of the season in between the posts, stopping both shots she saw.

Andover/Whitesville and Genesee Valley/Belfast will do battle for this year’s tournament crown back under the lights in Belfast on Saturday, in a 7 p.m. first kick. Beforehand in the Consolation round, Avoca/Prattsburgh and Friendship/Scio will go head-to-head beginning at 5 p.m. 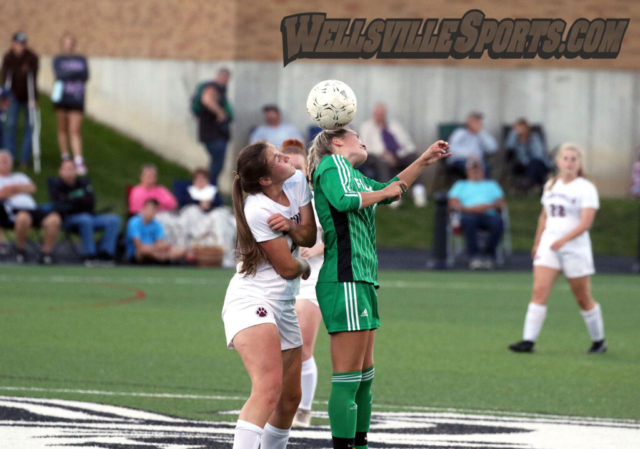 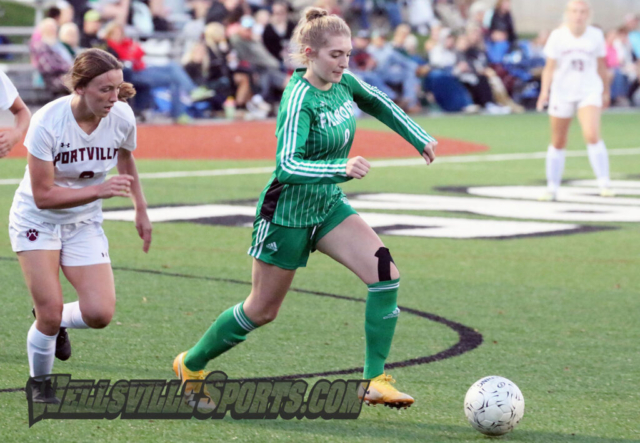 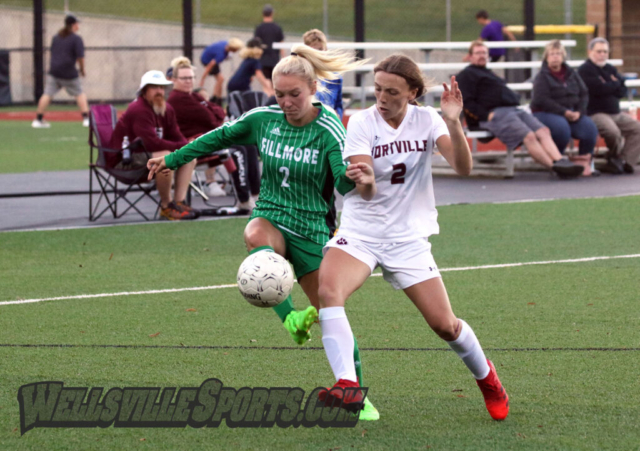 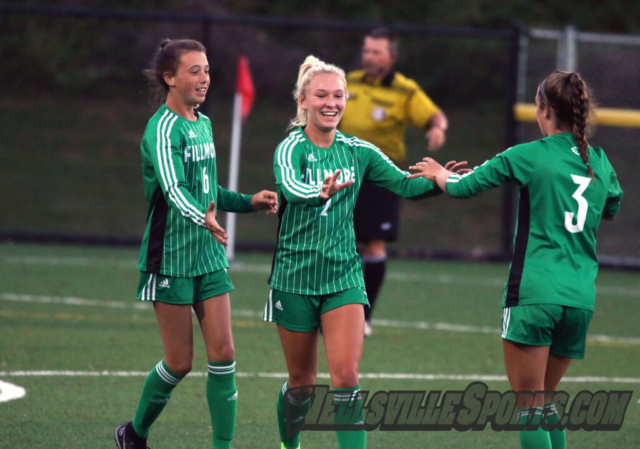 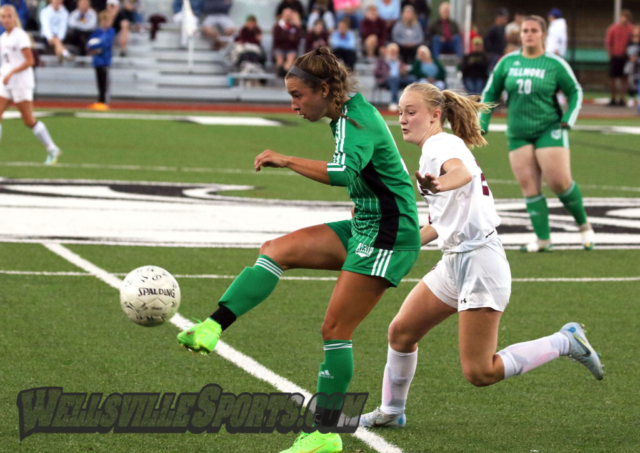 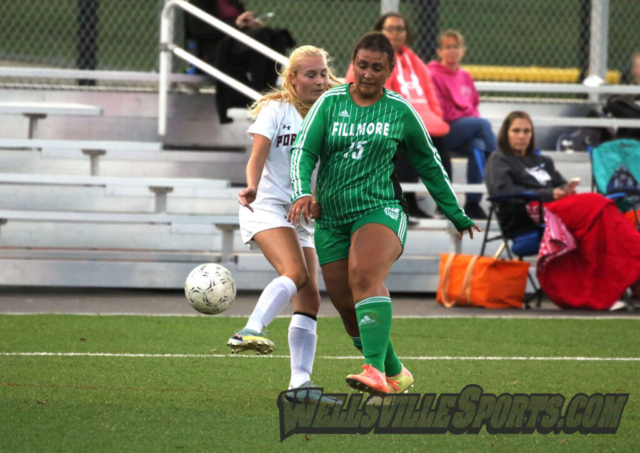 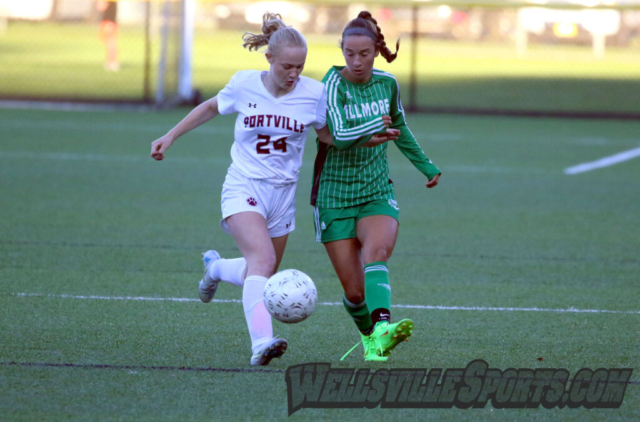 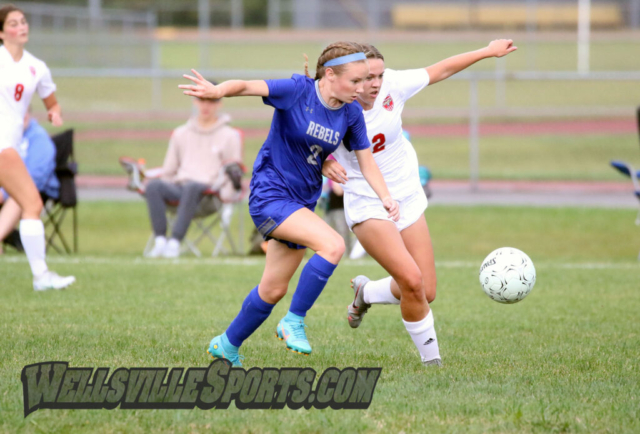 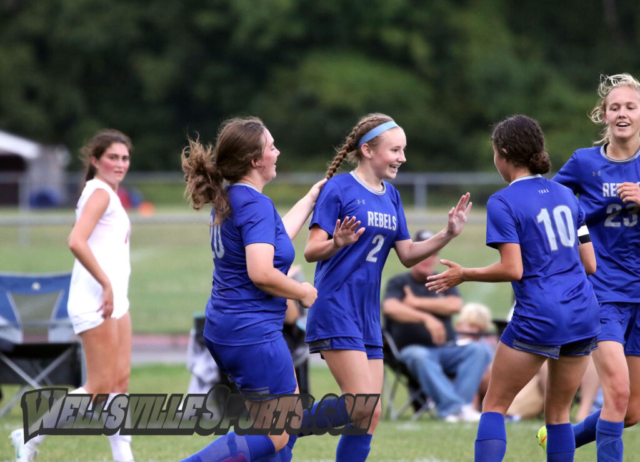 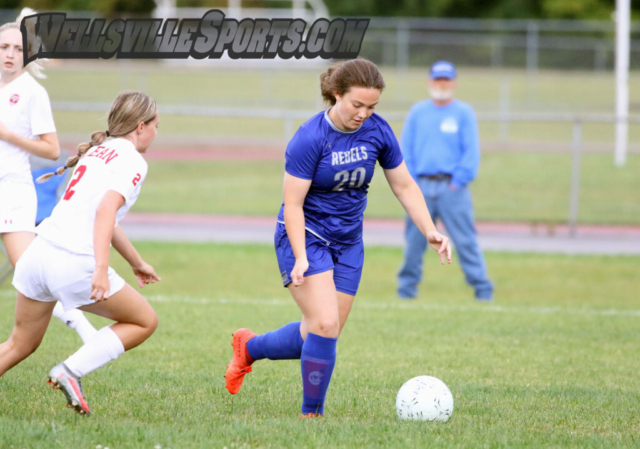 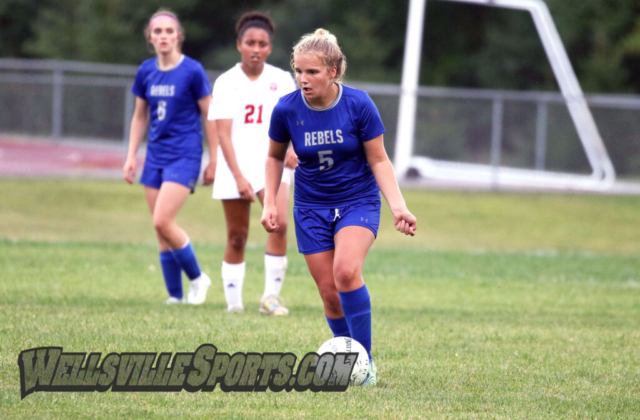 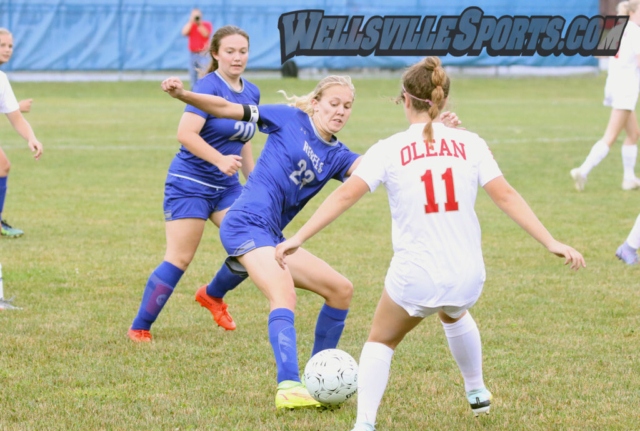 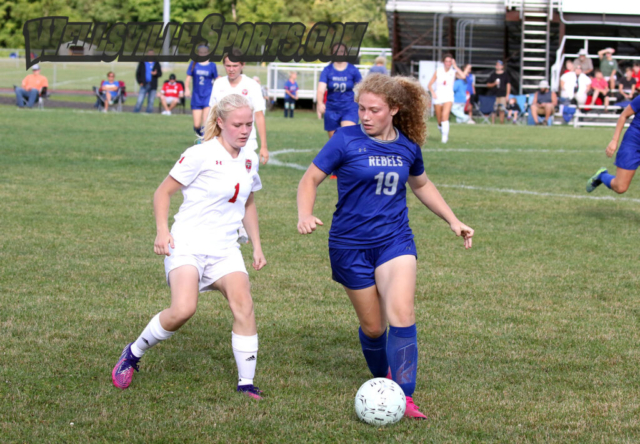 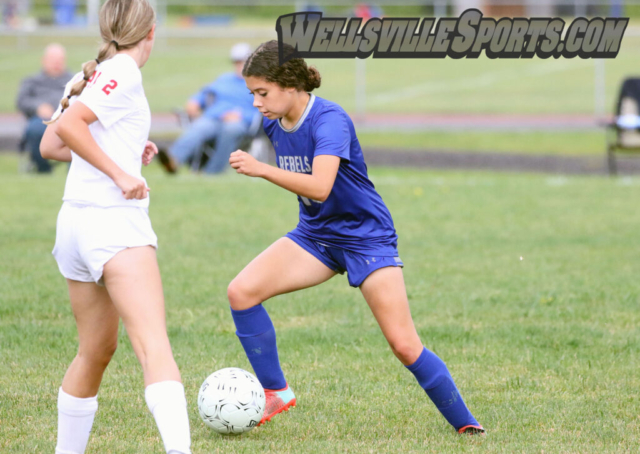 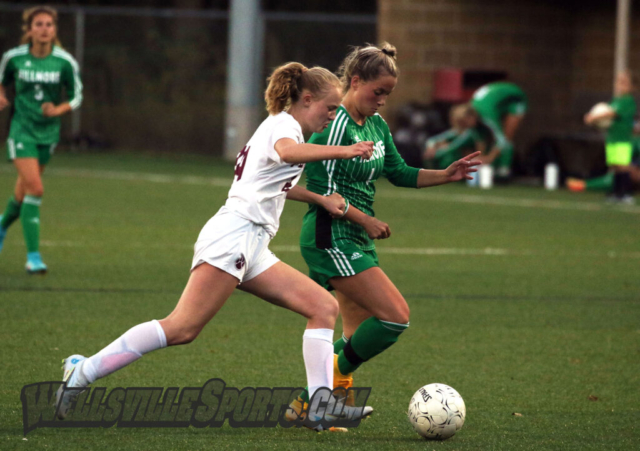 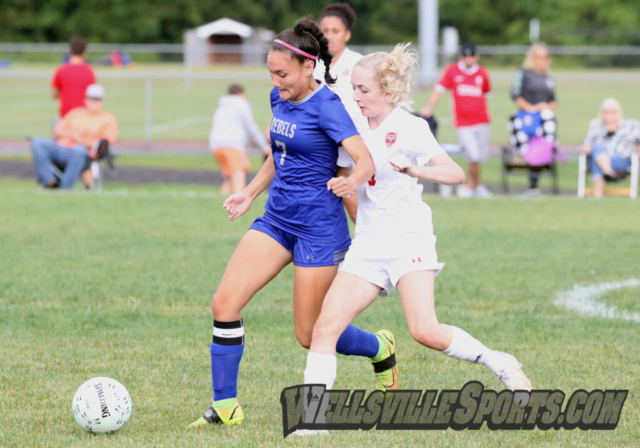 OLEAN — Entering her final season with the Lady Wolverines of Bolivar-Richburg, one of the County’s top scorers helped get her squad rolling in the right direction out west in Olean on Thursday.

Sandwiched in between the first goal for the Lady Huskies, McKinlee Harris dished out two of her own to help take the lead going into the break — a lead that the Lady Wolverines were able to hold onto with one more big piece of insurance with nearly 10 minutes left in regulation, as they advanced into this weekend’s title game of Olean’s home tournament with a 3-1 win over the hosts in red and gold.

Harris wasted no time finding the board first for Bolivar-Richburg (1-0) within the first 10 minutes of play. With her first tally, she gained possession and then used her awareness to work her way around the Olean defense from within the left wing. Garnering the room she needed to provide a shot, the Lady Wolverines senior let one go, sailing a high ball straight into the upper right corner of the cage to break the ice.

Although Olean fell behind rather quickly, their response was just as rapid. At the 28:04 mark, the Lady Huskies found a way to tie the game up with Allie Stayer’s second connection of the season, working her way past the Lady Wolverines defense to bury the ball behind Kyla Gayton in between the posts, on the short side.

The tie would remain in place up until under seven minutes remaining on the clock, when Harris gained traction on another chance. From near center, she would go on to lift a high ball back towards the Olean net, gaining just enough air and space to sift its way through to the back of the net, giving Bolivar-Richburg a 2-1 edge after 40 minutes of play.

With some second half pressure beginning to mount on behalf of the Lady Huskies, the Lady Wolverines were able to find the game-ending capitalization they searched for. They would receive it from Cassidy Stives parked out front of the Olean goal, as she knocked in a perfectly-placed corner kick from the foot of Madigan Harris with 12:40 left to go, ultimately sealing the victory for the visitors in white and red.

The Lady Wolverines, despite the victory, were heavily outshot by Olean by a 19-6 margin, with Gayton earning winning honors in goal with 18 saves.

Bolivar-Richburg will head back over to Olean, Saturday afternoon to vie for a tournament championship, as they prepare to square off against the Hornell Lady Red Raiders in a 2 p.m. first kick. Hornell defeated Ellicottville in their first round battle later in the day, via a 2-0 shutout.

ADDISON — From start to finish in their home debut on Thursday, the Lady Knights of Addison expressed much success against visiting Wellsville.

In opening round action of the Blake Driskell Tournament, the hosts in maroon were able to find the back of the goal left and right, igniting a heavy offensive effort with a first half statement in their 8-0 shutout of the Lady Lions.

Kerrigan Driskell was the main driving force behind Addison’s offensive efforts, as she posted a first half hat trick, while Jillian Ames followed behind with two goals of her own, along with an assist on one of Driskell’s goals. Addison would total seven in the first 40 minutes to assist in setting the tone for the remainder of the way.

Further statistics were unavailable to report upon publication.

Wellsville (0-1) will now take part in Consolation round action set for Saturday evening back in Addison, as they get set to take on the Alfred-Almond Lady Eagles in a 4 p.m. first kick to close out their tournament stay.

Have you seen this gorgeous home just outside of Cuba NY for sale ???

Deadly crash on Route 417 in Portville