Home » On this day in 1973, Watkins Glen concert was the largest ‘mass gathering’ in US history

On this day in 1973, Watkins Glen concert was the largest ‘mass gathering’ in US history

The Grateful Dead, The Band, and The Allman Brothers Band held “Summer Jam”

It was 49 years ago today (July 28, 1973) when an astounding 600,000 packed into the Watkins Glen Grand Prix race track for what was billed as “Summer Jam at Watkins Glen”. They were there to see the Allman Brothers Band, Grateful Dead and The Band. Top image is an incredible capture by the Associated Press of the masses, presumably captured from aboard a helicopter. I replicated that shot yesterday at the track with my drone. Many historians claimed that the Watkins Glen event was the largest gathering of people in the history of the United States. The barn, a late 1800’s barn that was once part of a dairy farm here before the grounds became a racing venue, remains right where it was. The stories from that memorable day are legendary. I enjoy commemorating the anniversary here mainly because of the fabulous recollections so many of you have from that summer day. 150,000 tickets were sold for $10 each, some 450,000 folks got in for free. From the endless line of cars that stretched for miles, to the mountains of trash left behind—the stories so many of my followers have from that day 49 years ago today are priceless. Specials thank you to Michael Printup, President of Watkins Glen International and Joe Green, Senior Director Facilities & Operations at Watkins Glen International, for their assistance with this. 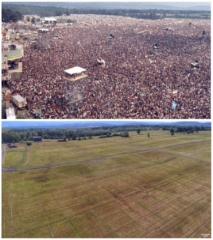 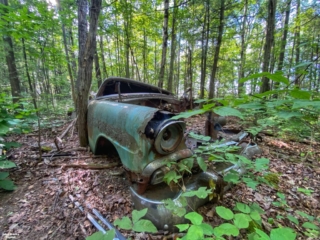 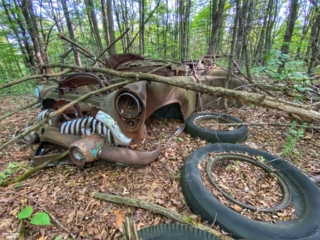 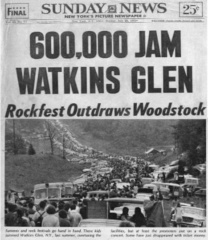 It was such a stunning scene 49 years ago today at Watkins Glen that it was front page news the next day in the New York Daily News. 600,000 crammed into the village to make their way up the hill to the famed Watkins Glen Grand Prix road course for a concert of all concerts. The Allman Brothers Band, Grateful Dead and The Band drew fans from all over America. Way back, behind what was the stage area, are reminders of that hot summer extravaganza—remnants of old cars left behind in the mayhem. These were concert goers who likely drive beat up cars there and left behind what they arrived. The area now is extremely wooded and quite challenging to get to. Joe Green, Senior Director Facilities & Operations at Watkins Glen International took me in his ATV as we cut through the heavily wooded area inside track property to see this yesterday. He first took me there two years ago and I was fascinated by the sight—cars picked clean many years ago. It’s about the only reminder on the grounds of this storied track, of the wild scene that occurred here on a hot summer day on July 28, 1973.