Home » The Great Wellsville Balloon Rally with the Cannons

The Great Wellsville Balloon Rally with the Cannons

Well-known local lovebirds take their first flight in a balloon

View gallery of the flight and the afterglow

The 2022 Great Wellsville Balloon Rally has been a huge success. The perfect launches on Friday and Saturday morning were a great reward after two years of hiatus due to Covid-19.

Marlee and Brian Cannon, formerly of Wellsville, now of Amity Lake, decided this was the year to take a balloon ride. The Cannon’s have raised a family in Wellsville and have attended many Great Wellsville Balloon Rallies. After 42 years of marriage, for whatever reason, call it a post pandemic bucket list, 2022 was the year this couple took a flight. They were not disappointed, explains Brian:

“Marlee and I have never been in a hot air balloon before so this was a great experience last night in our local area!  Marlee has skydived with our oldest son Matthew, we both have flown a lot through the years but the balloon ride really was an awesome flight!

We were able to experience last nights ride courtesy of our friend Mark Bokman and Bokman of Wellsville who is a platinum sponsor of the Balloon Rally.  Our ballon ride was with Scott Saxton in the Miss Molly, named after his middle daughter who is 5.  Scott, his brother Tony and their Parents Pat and Phil have been bring their balloons from Northeastern PENNSYLVANNIA to Wellsville’s ballon rally for 20+ years. Their parents stayed at our house many times and the entire family are knowledgeable , safe and weather conscious balloonists!

It was so great to reunite with the Saxton crew after all these years!!

Scott’s Crew Chief, Sandy as well as Scott gave us safety briefings prior to our flight as well as when we got in the basket!  As you can see from the photos we slowly flew south along the Genesee River which I did not know had so many bends in it along the old WAG railroad trail.

We could see for miles in all directions as you could see up to Andover, over to Belmont and many miles past Genesee, PA-it was an amazing 360 degree view!  Great views of the Wellsville track and Athletic field as well as way up Trapping Brook Road and on your hill Andrew!

Scott brought us down to treetop level and then way back up – I guess we were about 1500 -2000 feet above the ground at the highest.

Our slow, peaceful balloon journey took us past Trout Run Campgrounds ( Where Scott’s brother Tony landed his balloon) into the depths of Riverview heights in Stannards!  We has a gentle landing in the yard next to Sandy Palmiter’s home(Sandy’s husband David was Marlee’s teacher at Whitesville High School back in the mid-1970’s) in the Heights and immediately drew a large crowd of extra ground crew courtesy of John and Carol Flurschutz as well as Luke Kelley and his family! “

Here is a photo slideshow of the ride from Island Park south along the WAG trail: 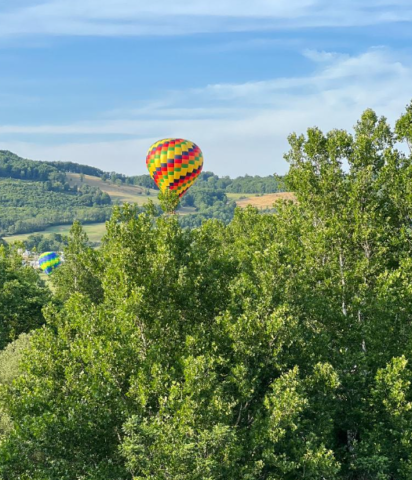 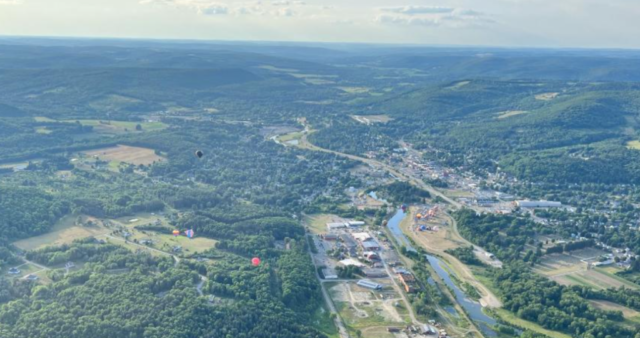 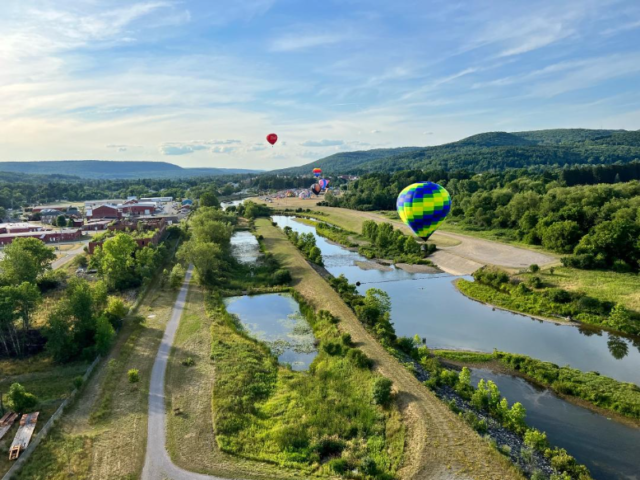 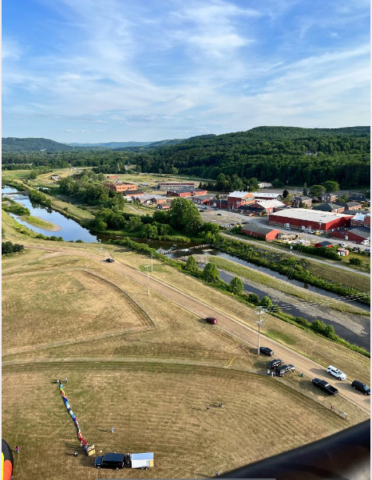 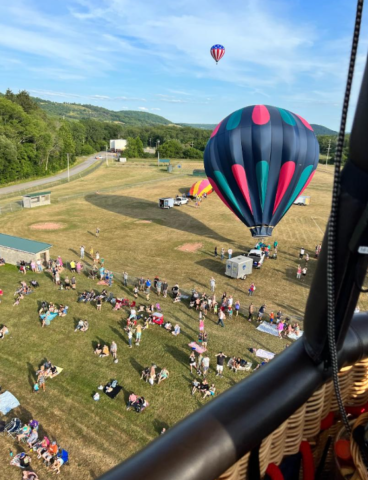 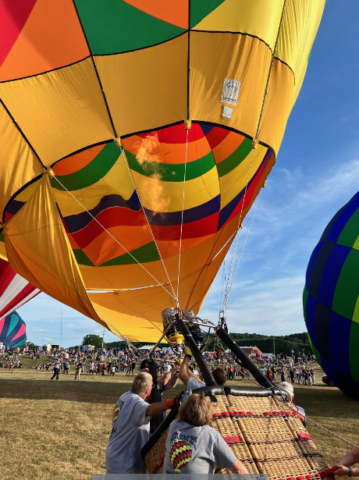 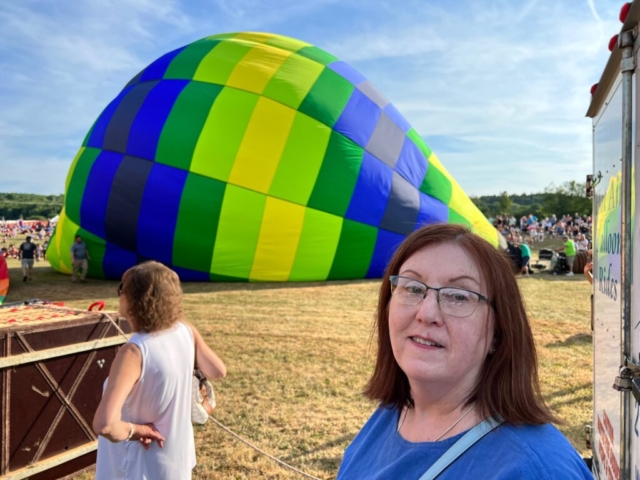 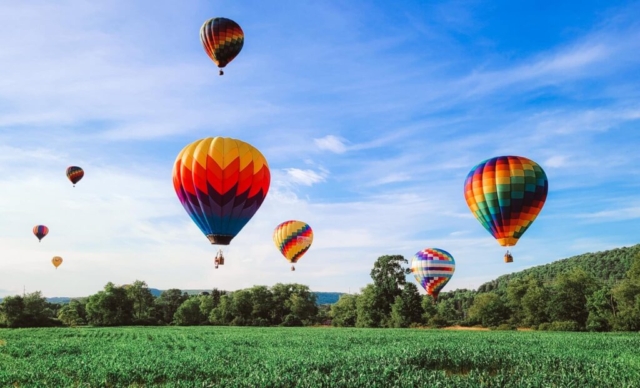 The “balloon honeymoon” didn’t end with the flight down the Genesee River Valley, the Cannon’s enjoyed the afterglow. For those who aren’t familiar with the afterglow, multiple balloonists volunteer to fill and fire balloons on the ground after dark. As you can see from the pictures below, it is a unique experience of light and sound: 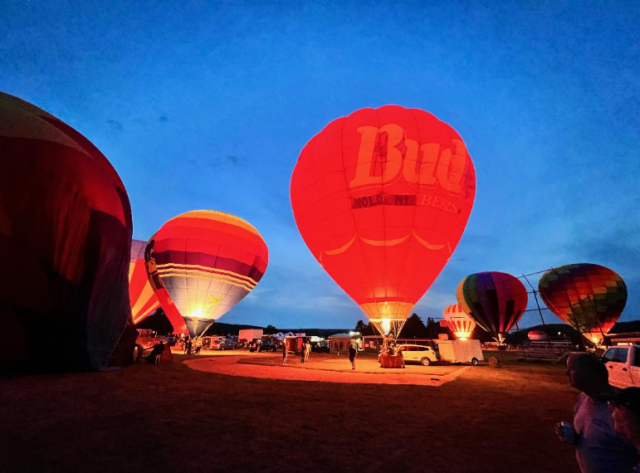 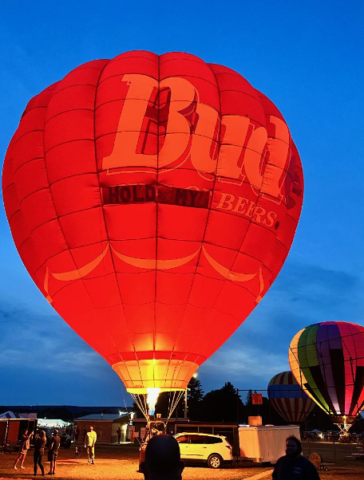 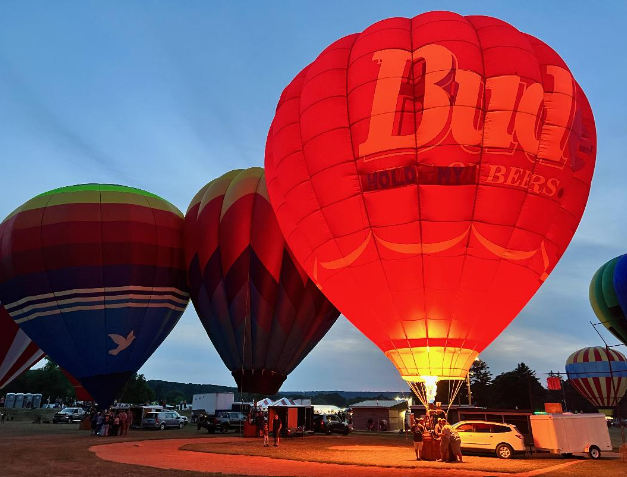 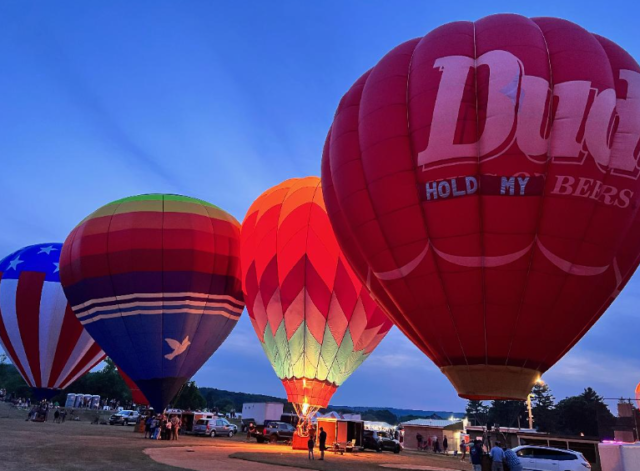