WELLSVILLE — The Lions of Wellsville celebrated their Senior Night in style back on their home confines at the Wellsville Country Club on Thursday, as their Seniors propelled the way forward towards success, bouncing back after a pair of losses to both Fillmore and Genesee Valley/Belfast just a day earlier with a 36-19 win over Bolivar-Richburg.

Mason Parks helped ring in the victory for Wellsville (6-3) with the match’s lowest round shot, as he put together a match-low score of 50 to claim the medalist honor. Not far behind him was Jack Jordan, as he chipped in a round of 51. Dylon Day collected a 55. Briar Dye scored a 57, while Serena Boussa rounded off with a 60.

Bolivar-Richburg (1-3) was paced by a team-low round of 53 fired by Maddox Day. Gauge Robinson followed with a round of 58. Anthony Donoghue and Roman Johnston each chipped in with a 66, while Ryan Greeson concluded the scoring with a 68.

Both teams are back on the links tomorrow in a pair of 4 p.m. tee times, if weather permits, as Wellsville heads out to the Ischua Valley Country Club to take on Hinsdale, while Bolivar-Richburg heads back home to the Bolivar Golf Club to host Genesee Valley/Belfast. 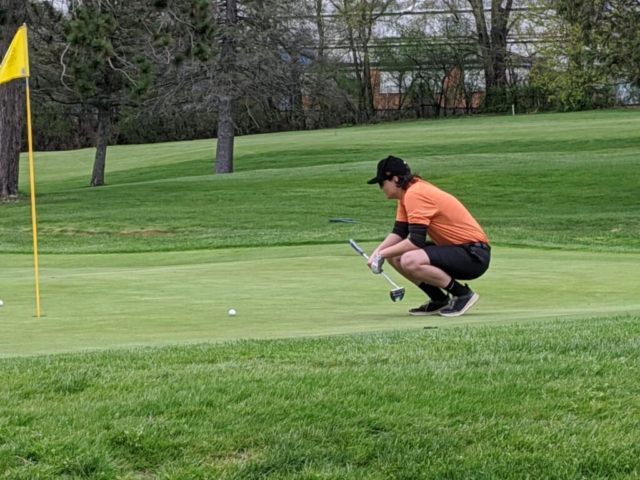 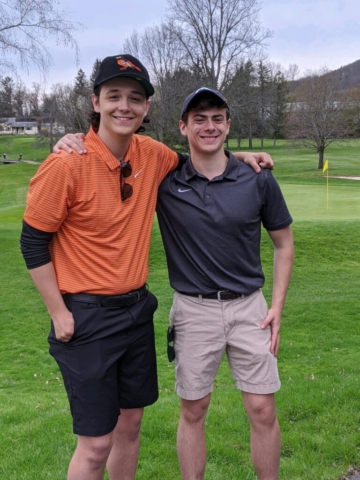 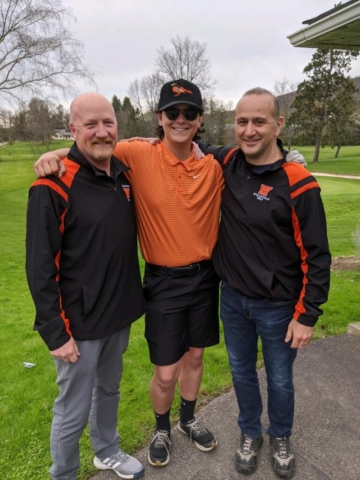 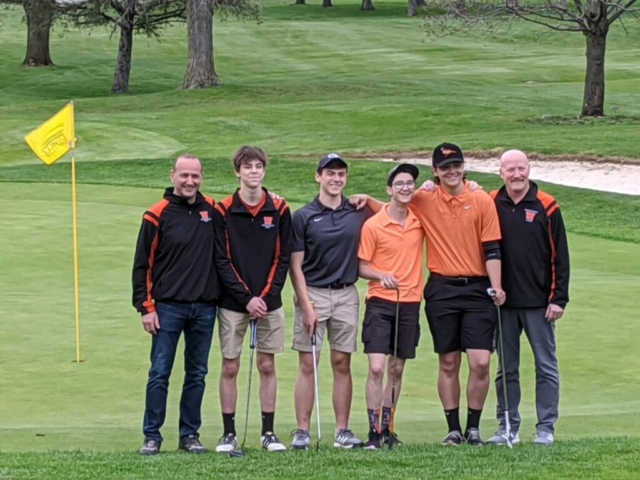 RUSHFORD — Up at Allegany Hills on Thursday, it was a match controlled by the Hinsdale Bobcats, as they saw Caden Miller record medalist honors at the end of the day to set up what was a 37-15 victory over the road against the host Rebels of Cuba-Rushford.

Miller fronted the scorecard for the Bobcats (2-5) with a match-low round of 58.

The Rebels (1-5) were led by Haven Kellogg, as he tallied a team-low round of 62. Cliff Karn provided a 71, while Ethan Fries rounded off with a 75.

Both teams are back on the links Monday night in a pair of 4 p.m. contests, as Hinsdale hosts Wellsville at the Ischua Valley Country Club in Franklinville, while Cuba-Rushford heads to the Wellsville Country Club to take on Genesee Valley/Belfast.

BELMONT — Just three matches took center stage in the County’s lone tennis match on Thursday in Belmont, all of which being contested from within the singles department.

One where the visiting Tigers of Scio managed to bring out the brooms against the JagDogs, as all three singles matches went in their favor to take the 3-0 decision in the end.

A thrilling third singles match between Scio’s Austin Gowdy and Genesee Valley/Belfast’s Gavin Kenyon went all the way down to the wire. After Gowdy recorded the first set victory, Kenyon fought his way back through a back-and-forth second set to build up an exciting finish in the last.

Both competitors would force a third-set tie break, one where Gowdy was able to come away with a three-point advantage to take the victory and the match sweep for the Tigers (5-3) at the end of the evening.

Adding wins for Scio were Corey Field at first singles over Trevor Clark, and Ben Weimer with a second singles win over James Frawley.

Both teams are back on the court tonight with 5 p.m. first serves, if weather permits, as Scio heads for Houghton College to take on host Houghton Academy, while Genesee Valley/Belfast (2-5) looks to rebound on the road, visiting Bolivar-Richburg.

Wolverines bring out brooms in meet sweep of Fri/Scio, C-R

BOLIVAR — The sweep was on for the Wolverines of Bolivar-Richburg, Thursday evening on their home track, as both boys and girls teams dominated the field of competition with multiple first place wins to take the overall first place finish against both visiting Friendship/Scio and Cuba-Rushford.

The boys team collected 13 first place finishes to go with 81 points, with Rudy Polk and Ethan Coleman both leading the way with three victories each, as Polk took the top spot in all three of his events in the field – the high jump, long jump and triple jump, while Coleman collected triumphs in the 100 dash, 400 sprint and pole vault.

Lloyd Kinnicutt and Hunter Stuck added two more wins themselves behind sweeps, as Kinnicutt collected winning distances on both the shot put and discus, while Stuck brought out the brooms to record top finishes in both hurdling events – the 110 and 400 hurdles. Caden Giardini had the team’s final individual win, placing first in the 3200 run.

The Wolverines also added in two relay victories along the way.

For the Lady Wolverines, 10 first place finishes of their own were tallied to pace their 93-point top finish. The team saw both Raegan Giardini and Kori Thomas lead the way with a pair of wins each, with Giardini climbing to the top in both the 800 sprint, and 1500 run, while Thomas swept both the 100 and 400 hurdling events to further the cause.

Giardini would also race a leg in the team’s lone relay win, collecting it in the 3200.

Laila Knight and Maddy Sisson would complete a team sweep of the throwing events for Bolivar-Richburg, as they both garnered medaling distances in the shot put and discus. Other individual winners for the team include: Kyla Gayton in the high jump, Nadia Baldwin in the long jump and Nahia Etxebeste in the triple jump.

Friendship/Scio would earn the second place finish behind Bolivar-Richburg overall, with the boys recording 43 total points and three first place wins. Of those wins, Greg Wesche had two of them, as he placed first in the 800 sprint and 1600 run. Jordan White added in a win of his own, finishing tops in the 200 dash.

As for the ladies, Lexi Crossley would gather the two lone individual wins to help set up a 25-point second place finish. Friendship/Scio would also see Crossley race a leg in the team’s winning 400 relay squad.

Cuba-Rushford would finish third overall with nine points from their boys team, and 10 from the ladies, with Kendall Tompkins collecting the solo victory in the 400 sprint.

WHITESVILLE — Through the early stages, Genesee Valley/Belfast and Andover/Whitesville stayed neck and neck with one another, with each team breaking the ice themselves with a 1-1 tie during their first at-bats of the contest.

From that point, the offensive production would escalate fairly quickly. After Andover/Whitesville jumped ahead by a pair after three innings, Genesee Valley/Belfast put capitalizations on everything they were able to get their hands on, as they scored a seven-run fourth inning and never looked back on Thursday, coasting towards a 17-4 win in Whitesville after six innings.

Genesee Valley/Belfast (5-8) struck every chord from hitting to using their legs around the bags, as they fought through an early back-and-forth exchange with Andover/Whitesville to bring it all together in the fourth inning, when the offense exploded with a run that saw them score 16 of the game’s last 17 runs, including the last nine to end the game.

The JagDogs totaled seven hits at the plate, with Elden Aquila earning a pair to lead the way. The win on the mound was awarded to Thai Norasethaporn and his brilliant relief appearance beginning in the third inning, only giving up one run the rest of the way behind seven strikeouts to keep Andover/Whitesville (2-7) at bay.

On the counter, the hosts were paced by a six-hit afternoon at the plate, two of them from CJ Estep to lead the front of the pack. Layton Miller chipped in with a double to further the cause. In turn, Miller recorded a pair of strikeouts in the midst of his two-inning start on the hill. Andover/Whitesville will now prepare for a long bus ride to Doubleday Field in Cooperstown to take on Avoca/Prattsburgh on Saturday at 10 a.m.

As for the JagDogs, they will also return to action on Saturday, traveling to visit Alfred-Almond in a 12 p.m. first pitch.

CUBA — It was one of the more wild and hectic games you may see all season. On Thursday, 27 combined runs off 24 total hits were collected between both the Bobcats of Hinsdale, and the host Rebels of Cuba-Rushford in an offensive power battle that kicked in almost immediately after the opening frame

After an early lead for the Rebels was garnered, it was back and forth trades soon after. Multiple lead changes were exchanged, with Hinsdale holding the first one in tact. But coming down the home stretch, the hosts made sure they had the final one by scoring nine of the game’s last 12 runs to go ahead and towards a wild 16-11 victory on Senior Night.

“It is always nice to get a win for our Seniors on Senior Night,” said Rebels coach Pat Wight. “We got down early with Hinsdale, and that’s more credit to them for coming here ready to play tonight. Give us some credit too, our nine Seniors put us on their backs and we found a way to battle back. 17 hits is pretty impressive.”

From the opening pitch, Hinsdale and Cuba-Rushford (5-7) came together for a grueling back-and-forth battle until the end, beginning with the Bobcats overtaking the Rebels lead in the second inning by posting their largest stand of offense – a five-run frame to hop on the board with a 5-2 lead to control.

That lead would grow to as much as five before the Rebels kicked their offense into gear themselves, as they tied the game at seven on each side in the bottom of the fourth with a pair of runs. Five more runs would come across after Hinsdale (0-9) took the lead right back in the top half of the fifth, providing what was ultimately the final lead change in all to keep the Rebels out front for good.

The Rebels totaled 16 runs off 17 total hits at the plate, with Jarrett Campbell leading the way with a perfect 4-for-4 outing behind a double and three RBI. Logan Lewis added in a pair of doubles from within his three-hit afternoon, driving in four total RBI, while Mason Grasso had three hits himself.

On the mound, the win was credited to Austin Pinney, who struck out six and walked four in his relief appearance that stretched into the seventh.

For Hinsdale, they collected 11 runs off seven total hits, with Tucker Schwartz garnering three of them. On the mound, Damion Brown provided a magnificent four innings of work, striking out 10 and walking five in his start for the Bobcats, who are now off until Tuesday on the road, visiting Andover/Whitesville at 5 p.m. in Whitesville.

If weather permits tonight, Cuba-Rushford will head for Bolivar-Richburg to partake in tournament action starting in a 5 p.m. first round battle slated against the Honeoye Bulldogs. Oswayo Valley and the host Wolverines will follow at 7 p.m.

This Week at Giant Food Mart