Thanks to the Barber’s dog, the Waide’s were alerted of the fire and the baby was taken from this room, as 10 minutes later, it was on fire.

An Andover family and their pets escaped without injuries after a fire destroyed a large, two-story garage/barn and their family home on Pixley Hill Road in Andover on Monday.

Firefighters from Andover were toned out at 10:22 a.m. and were back in service on Tuesday at 6 a.m. When they arrived, fire officials said the barn was already leveled and the fire had spread to the house and was trapped between the ceiling and the tin roof.

“So we tried to save the house … after we determined everyone was safe, that had the most priority over everything,” said Andover Volunteer Fire Department Chief Troy Witter. “When the fire extended to the house, it went into the ceiling and between the ridgeline of the roof and the tin roof and held the heat in.

When we arrived, the garage was already on the ground,” Witter explained. “There was nothing left of the garage or barn and the fire had already spread to the house. We had trucks on the road within six minutes. We had an update while we were enroute that a propane tank had exploded.”

The owners of the home, John and Arielle Waide had already got out with their 14-month-old son, Logan and their dogs. About four hours later, firefighters rescued their family cat from the burning home.

“I was reading a book and Ari was drifting to sleep. Our son (Logan) was sleeping after playing in the park,” said Waide. “I had just been in the kitchen 10 minutes before our neighbor, Al Barber, called to see if we were OK. He thought there was a fire in driveway.”

Waide said by the time he went upstairs and Arielle went to grab the baby, the two-story garage/barn was fully involved and within 10 minutes, the fire had spread to the house and the nursery was on fire.

“She wanted to alert her humans something was going on and 10 minutes later, the fire was in our house and the baby’s nursery,” said Waide.

Fire investigators said the barn was open air and the oxygen allowed the fire to spread. An exact cause has not been determined.

“The heat was immense and I knew we were in trouble,” said Waide. “In the garage I had some light fuel and there is a 500-pound, 1,000-gallon propane tank. It didn’t explode but the radiant heat caught the house on fire.”

Witter explained the driveway was long and narrow and that the tankers had to back in to go up to the scene and leave for more water.

“This was such a tough fire, because of the ridge line of the house, there was nothing we could do,” said Witter. “Everyone did a great job fighting the fire considering what we were dealing with, and I appreciate all the help we had from not only our department but from all the departments who responded. Their neighbors and friends came up with side-by-sides and let us use them to get equipment up to the scene. There was help from everyone and it was really appreciated.”

“I made wine a couple years ago and the glass had melted,” said Waide. “My brother-in-law, Istvan Szabo, is a material science engineer at Corning and said the fire had to be at least 2300 degree to do that.

“We watched the the firefighters battle the water issues, the driveway, getting trucks stuck and the fire,” Waide said. “It was humbling and surreal at the time. (neighbor) Mike Lindsey and I sat back 150 yards from it and just watched the fire roll past the car port toward the house. The firemen were wonderful of course, we have such dedicated community volunteers, they were back in service at six in the morning and most of them had to go right to work.”

Waide said he grabbed blankets and shoes as they left the house.

“Al Barber came up from his house with his side-by-side and took Ari and the baby,” Waide said. “Our other neighbors, Mike and Lisa Lindsay were there all night with teir side-by-sides helping us and the firefighters.”

Waide is an Emergency Medicine Physician Assistant at Jones Memorial Hospital and in 32 days, he will be deployed to Iraq. Waide is part of the Army Reserves 801st Field Hospital out of First Sheridan Hospital in Illinois. He has to attend mandatory training in Texas before he leaves.

Jones Memorial Hospital CEO Jim Helms asked for help with replacing his military gear and it was done. Andover Police Chief James Rumfelt said police uniforms were donated as well. Waide said he only lost his service revolver in the fire. His other hunting guns were saved and firefighters saved his oldest son’s gun cabinet.

As firefighters were fighting the fire, they were also sending things down the ladder, Waide said, including photos on the walls and a clock the family purchased in Germany.

“We lost everything, but we still have everything,” Waide said. “Around 3 a.m., my brother-in-law Jason said it best, ‘It’s like sitting on a lifeboat and watching the Titanic sink. You are ok but what you are watching is a disasters happening in front of you that you can’t stop and you can’t stop watching it.’ “

The family lost their vehicles and a lot of tools as Waide was once a contractor.

“The negative emotions of the fire were eclipsed by the emotions from people stepping up to help in any way they can,” Waide said. “It was a powerful and emotional night. The real emotional part was the next day. We got to bed and only slept three hours. At 10 a.m., I had 64 messages from people checking to see if we were ok, and Ari’s phone was likewise. People had heard rumors and reached out to us and it was overwhelming.

“I asked Arielle (an echo sonographer in the cardiology department at Jones Memorial) what she needed, but she said ‘nothing, my family is here.’ As you know, my mother-in-law, Brenda Szabo, is a rock-solid person, I tell everyone I hit the mother-in-law lottery,” Waide said. She drove over, got the baby and helped,” Waide said.

“By 7 a.m. one of the nurses from the hospital was already at the house with clothes for the baby. And then more clothes at 10 a.m. and then someone showed up with a car … I don’t think we have to cook food for a month,” Waide continued. “Every member of my command team has reached out at some point asking what I need. People from the community have offered us apartments, money, vehicles, food. They are all very touching and heartwarming and humbling, and a lot of things were over the top … I had to excuse myself at one point because I didn’t want to cry in front of everyone. People in our community are just kind and loving. People have wrapped their arms around us all week, it reminds me why I live in a community like Wellsville.”

As he looked at some donations, he said the boots were from an enlisted soldier. He talked about his undying respect for Jim and Dena Helms.

“I was involved in the professional fire service 20 years ago, there had to be at least 80 firemen there. Some were at the fill site, some were at the ambulances … you are talking 530 man hours of volunteer time,” Waide said. “They were trying to get the fire out. These guys and gals risked their lives in the rain and risked their lives to try to save the house. They did so much. The fire department kept asking, asked, ‘What can we get?’ They got so many things you can’t replace. At one point and time, I asked if they could get my mom’s ashes off the shelf. They did … it was a moment.”

Photo gallery of the scene, photos were provided by the Waide family and neighbors: 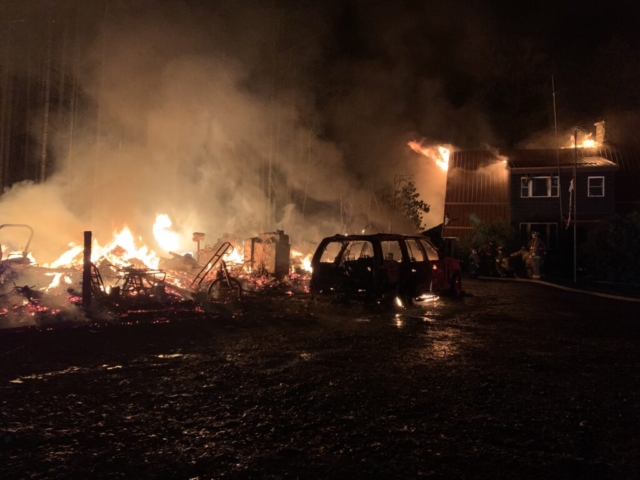 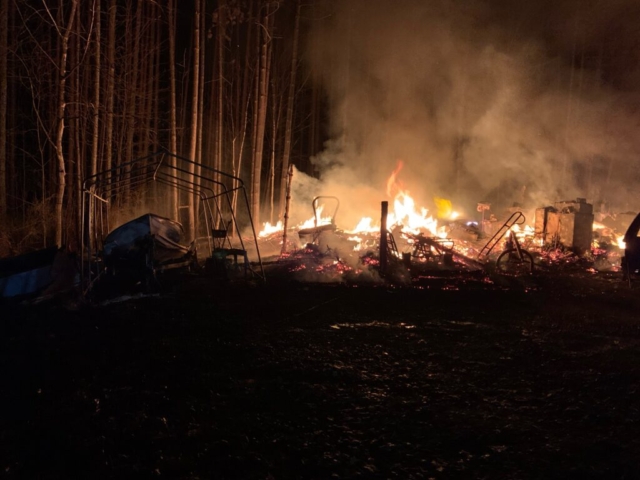 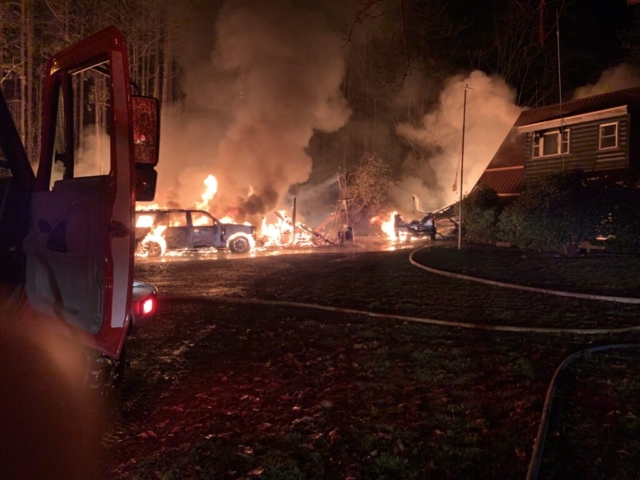 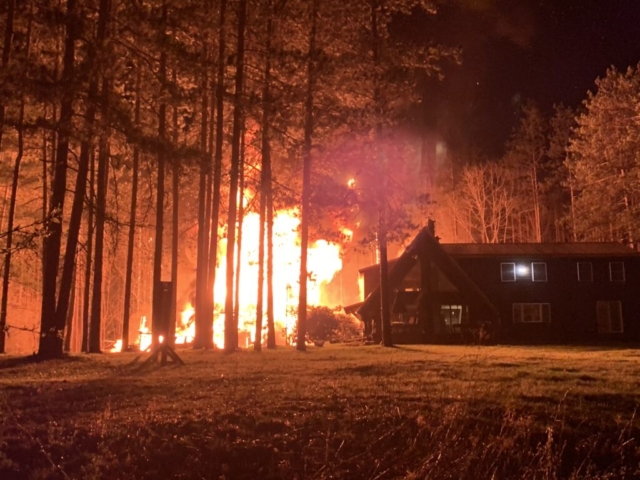 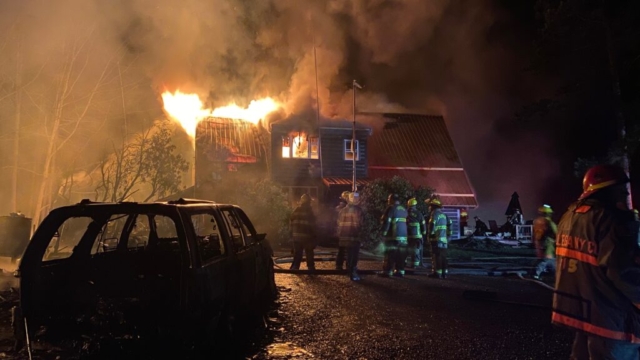 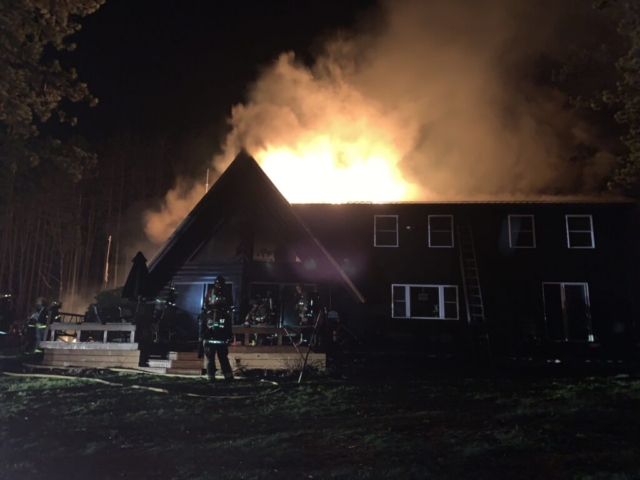 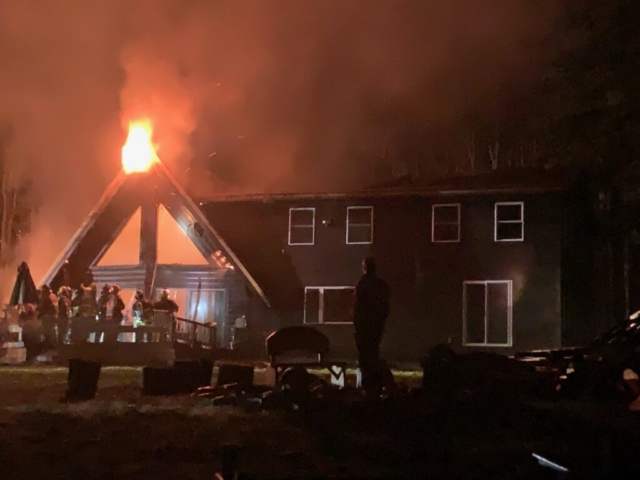 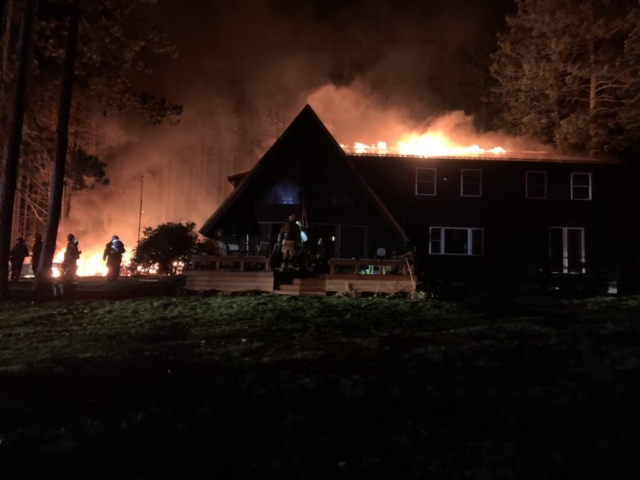 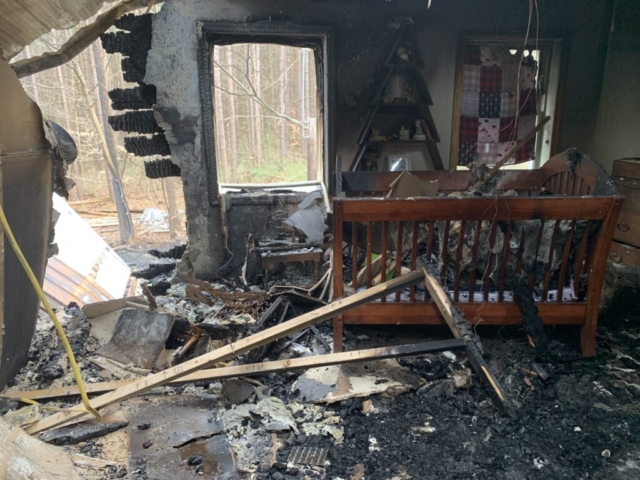 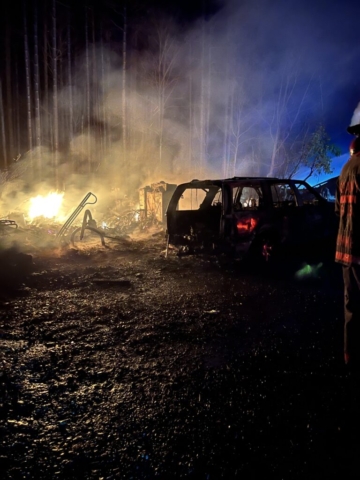 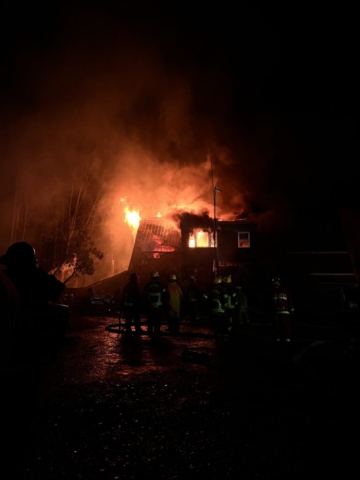 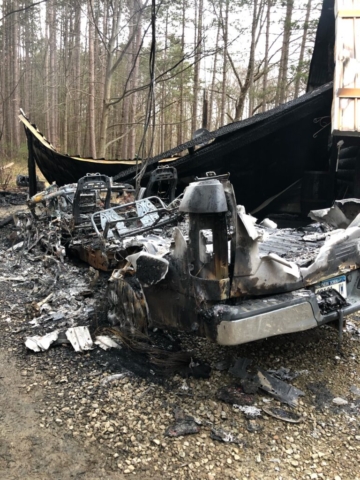 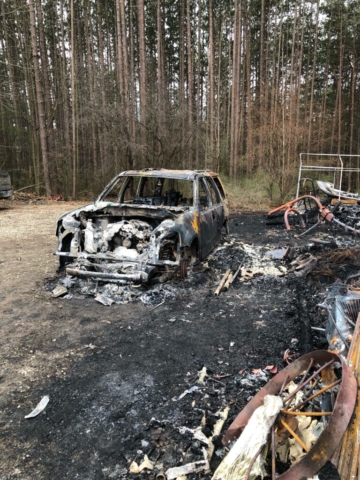 Anderson Column: From the fire comes news the community needs, John and Arielle will rebuild