Home » History made: Scoring and steals from the Andover/Whitesville team leads to upset and Section V championship

GAINESVILLE — The road in the debut season for Andover/Whitesville has been one of great efficaciousness. The team entered Sectionals red hot with wins in nine of their last 10 games while playing some of their best basketball at the most crucial time.

Andover/Whitesville would grab a first-round bye in the Class D2 bracket after clinching the No. 2 seed overall. To begin their hunt towards catching championship fever, they would come out swinging for the fences with a massive statement — an 89-30 win highlighted by a career-night, one of many, for junior Vanessa Hall, who had 48 points in the Quarterfinal triumph over Lima Christian.

Their next obstacle was a trip to the Semifinals, approaching what has been a brick wall in Sectionals for the last five years — the five-time Class D2 Champions themselves, the Elba Lady Lancers. It was perhaps the hardest that Andover/Whitesville had to work all season in order to get a chance at finally toppling the long-standing empire.

They would soon accept that challenge, and after what was a fight to the end, that brick wall was soon reduced to rubble. A win they waited so long for, had finally happened. And with it, came a chance to win a Class D2 Championship for the first time in their debut season as one.

All that was left in their way was No. 4 Avoca/Prattsburgh.

It all came down to Friday night at Letchworth. The chance to fulfill an ending of a lifetime was 32 more minutes away. Like their Semifinal battle with Elba, Andover/Whitesville would face some similar circumstances along the way against the No. 4 seeds — a brilliant end to the first half, transforming into yet another race to the finish.

Once again, it was a race that Andover/Whitesville managed to prevail in.

In their first ever season together, the No. 2 seeds would go on to record their first Class D2 Championship. For Andover, their first since 2007, and for Whitesville, it’s their first since 2012, as the fourth quarter defensive stand shines through, holding Avoca-Prattsburgh to three shots from the field while capitalizing on a red hot start after a 37-all tie going into the last period, holding strong until Gabbi Hall ended the game with a steal off an inbound with seconds remaining, sealing the deal on a 49-43 victory to finally complete Andover/Whitesville’s everlasting road to glory.

“This is really tough to put into words. I am so proud of the girls, and they worked so hard this season to make this happen,” said Andover/Whitesville co-coach Aaron Rawady. “Last game, we didn’t want it to go the way it did in the second half. Fortunately, we were able to finish the job and it helped prepare for a similar situation tonight. A seven-point lead at the half, and we gave it up pretty early. But the girls stayed calm, because we had been there before. They did what they were able to do with some outstanding defense in the fourth quarter. We had some huge stops, knocked down some big free throws when we needed to. They made this happen.”

You could imagine the elation celebrated by Andover/Whitesville (19-3) after claiming their first Sectional title in their debut season. But like their previous matchup with Elba, they would have to face a series of trials and tribulations against Avoca/Prattsburgh. That would come into effect right in the beginning, after falling behind by a 16-10 count after the opening quarter.

Seven of the game’s first nine points would swing Avoca/Prattsburgh’s way, including a hot start for Kendra Pinckney, who had eight of the team’s 16 points to kick the action off. Andover/Whitesville would respond with the next four points from Rachel Jackson, who cut the deficit to a pair before another run by the No. 4 seeds branched their lead out greatly, leading by nine behind a 7-0 run to help close out the quarter with the six-point lead.

In the second quarter, Andover/Whitesville responded after falling behind rather quickly to Avoca/Prattsburgh with as strong of a first half finish as they’ve had thus far. Falling behind by six, the No. 2 seeds, behind some key contributions from Vanessa Hall, Rachel Jackson and Maria Riloba, all hitting a three in three straight possessions on offense.

The treys came after Graci Lewis-Ellison helped score four of the team’s first six points of the quarter, providing the fuel needed to overtake Avoca/Prattsburgh’s lead.

“We had a couple of girls come in and give us some amazing minutes. Graci and Addison (Morgan) came in and did a great job defensively to help set us up, and Graci got some points to add to it as well. They lined up really well with some mismatches that we had. In the second quarter, we prevented them from getting the second-chance points, and then our offense opened up shortly after that,” Andover/Whitesville co-coach Jake Bannerman said. “We were flying. The rest of the team had half our points behind Vanessa, and for us that was huge. A lot of girls stepped up tonight, and that’s a testament to how hard the girls have worked. They all bought in.”

With key contributions flooding the hardwood from all different angles, the once six-point deficit became a seven-point, 30-23 lead for Andover/Whitesville lead to control, going into the break.

But then, the game took a big turn.

Turnovers, as well as a few offensive rebounds, began to become a regular occurrence, mainly for Andover/Whitesville, as Avoca/Prattsburgh buckled in with some huge third quarter defense. Kamryn Edwards started it all off for the team in maroon with a put-back off an offensive board that would close the gap to one. On the next possession, they were given the lead off a long Laura Morera three-pointer.

But when the quarter reached its end, it would reach even playing ground going into the last eight minutes, with Rachel Jackson helping the cause one more time on a long three-pointer to force a 37-37 tie — a similar situation from Monday night against the Lady Lancers.

“32 minutes in a game doesn’t feel like 32 minutes, but in the second half, it felt like it took forever,” said Bannerman. “It was a tough grind, and we played probably our best defensive game as far as matchups in man-to-man coverage for 32 minutes. We had to give up some height for it, but they worked their tails off.”

Rawady added, “Credit to Avoca/Prattsburgh, they worked so hard tonight. It took everything we had to beat them. They’re so tough defensively, they forced a bunch of turnovers that really killed us, they were strong on the perimeter on defense. They really made us work, and nothing was free. Jeff (Gilbert) does an incredible job with his teams every year. They gave us a battle.”

It would set up a fourth quarter that would set Andover/Whitesville apart from Avoca/Prattsburgh. The No. 2 seeds wasted no time striking while the iron was already hot on the stove, as they extinguished Avoca/Prattsburgh’s fiery third quarter run with sublime stands of defense, as well as scoring the first seven points on the attack right out of the gate — five of those points belonging to Vanessa Hall, including a three from downtown to extend the team’s lead to seven.

Hall would finish with Class D2 MVP honors behind a game-high 24 point effort for the team in white and purple.

“Vanessa was big for us again,” Rawady said. “She saw multiple looks defensively, and so many teams throw all sorts of defenses at her. When she sees a look, it’s something that she’s seen 10 times before, no matter what it is. She’s used to that, and the girls do a great job adjusting to that as well. They know where to give Vanessa the ball, and if they can’t do that right away, they move the ball around extremely well, and knock down some big shots when they need to. Tonight, they did that.”

It was a newly-founded lead that was never returned to Avoca/Prattsburgh, despite some late pressure down the stretch with a minute left to play, trimming the deficit down to as little as three. But in the end, some clutch free throw shooting from Hall, who sank one of two at the stripe pushed the game to two possessions with nine seconds remaining on the clock.

On the final play, Gabbi Hall put a bow on Andover/Whitesville’s Title with a steal immediately after an inbound, breaking away towards the basket for the lay-in to give them all the room they needed to lock down the team’s first Championship together. 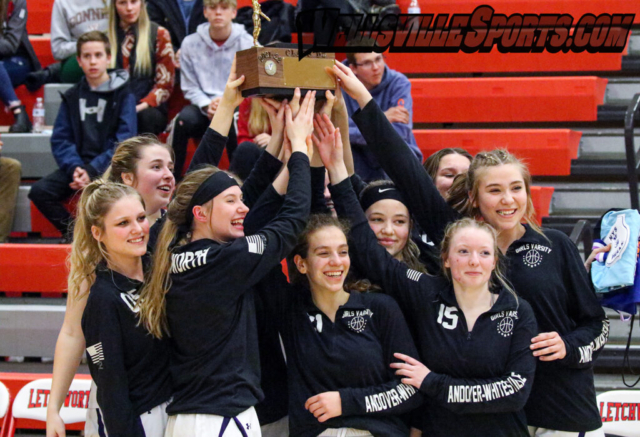 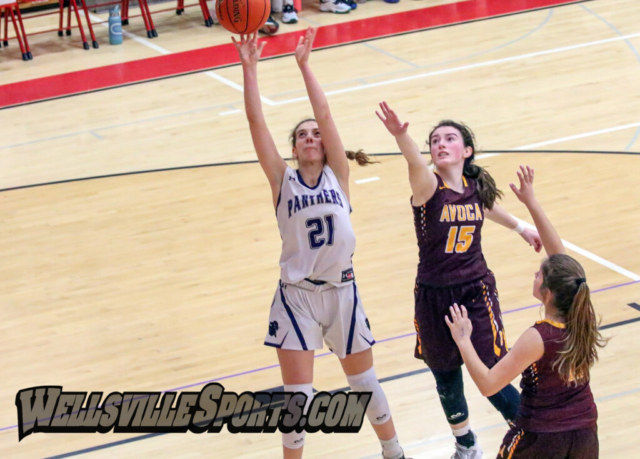 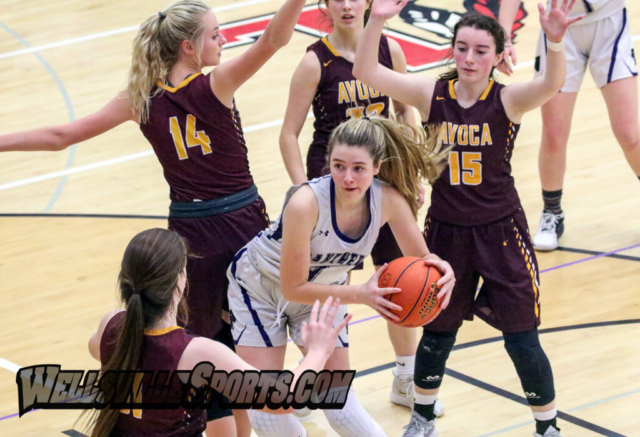 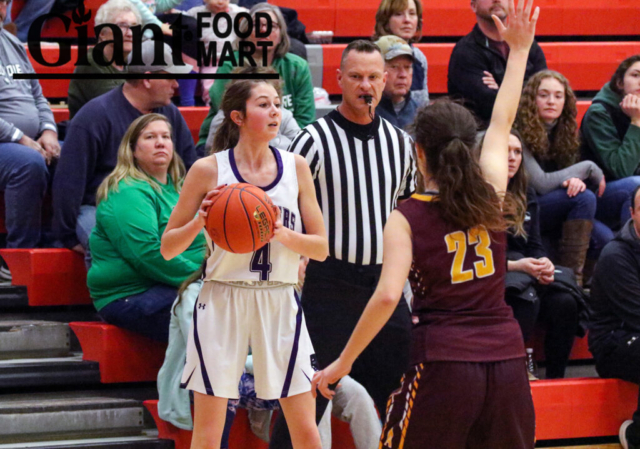 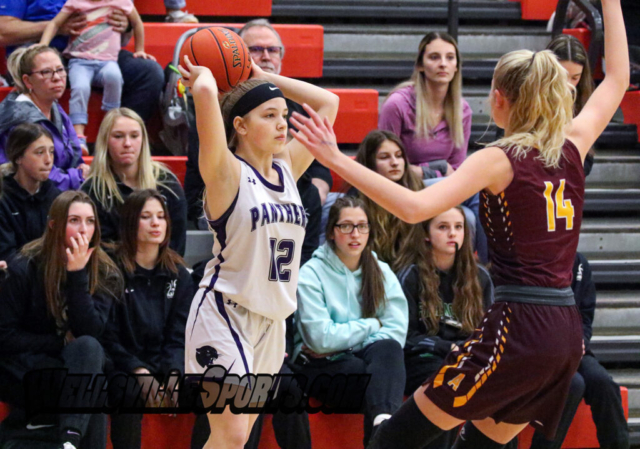 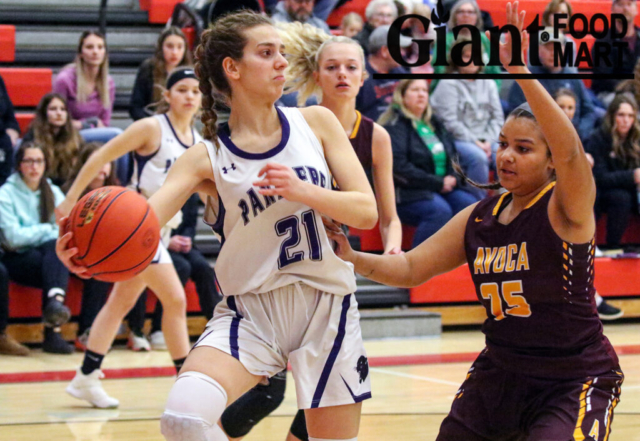 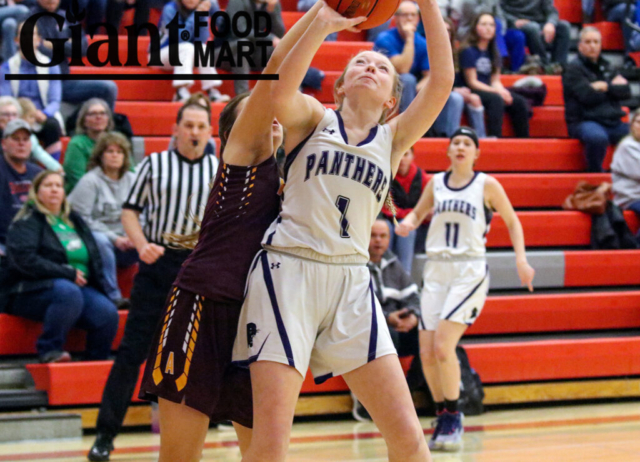 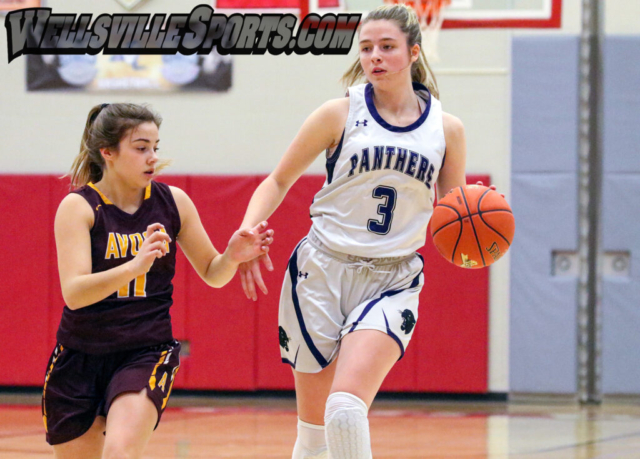 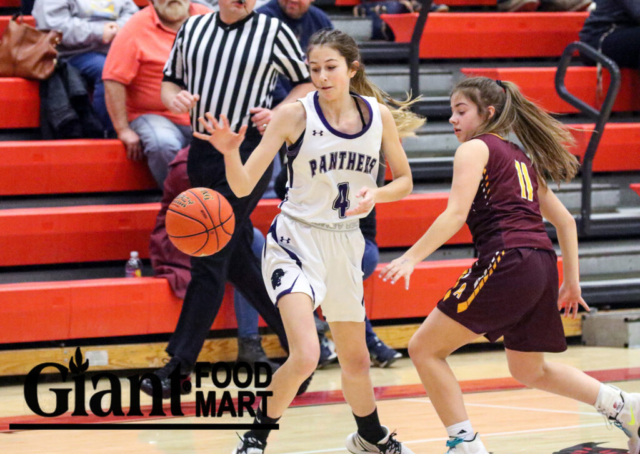