WELLSVILLE — The task at hand to open up their Sectional journey on Saturday was one that No. 4 Wellsville had to go toe-to-toe with. Like the Lions, their opposition also shares some of the same qualities that they hold — strong, tall, energetic, athletic. It was basically looking at themselves in the mirror.

No. 5 Penn Yan presented a challenge that the Lions had to respond to in the same exact way, in order to hurdle their way into next week’s Class B2 Semifinals.

All the characteristics that both teams shared between one another were put on full display, especially across a high octane first half that saw Wellsville jump out on top. In a game such as this, leadership is an absolute must to succeed.

For the No. 4 seeds, they looked to two of their best on the floor for guidance — Eli Schmidt and Logan Dunbar. Both would come through in a big way, as they combined to record 47 of the team’s 65 total points in the contest, with Schmidt helping the Lions grab the start they would need in the opening half, while Dunbar rose to the occasion by shutting the door on the Mustangs in the second half with an explosive third quarter in what was a 65-53 win to eliminate Penn Yan.

“Eli showed some great leadership. His energy was exceptional, and he kept us under control, which is crazy because he’s so enthusiastic and energetic,” said Lions coach Raymie Auman. “But really, he didn’t turn the ball over and there were times where we had to be calm, and he calmed us down. That’s something we haven’t had from him at the beginning of the year, so I’m proud of his development in that regard.”

Auman added on Dunbar’s performance, noting that “I’ve been waiting for Logan to have a game like today. It’s one of those things where he’s a gamer, he’s a champion and it’s that time where he has to come through for us and make those difficult shots. I thought he did a great job playing smart as well. At the end of the fourth, he got a dish down low and then pump-faked two defenders on the way in. That was really indicative of being a smarter player than the other guys he goes up against. You need to have that against a team that cheats down low like Penn Yan does.”

The first quarter between both Penn Yan and Wellsville (12-8) was a quarter of runs. Just three runs were traded, with the hosts getting the first and last punches of the frame, beginning with a pair of runners inside giving the Lions the early lead through the opening minutes. Soon after, the Mustangs provided one of their biggest responses of the night with nine straight points, all from three-point range off three triples to spring them into the lead.

But not long after, the Lions countered with a quarter-ending run of their own that perhaps set an early bar for the Mustangs to match going forward. A slew of Lions would help get involved behind Schmidt’s leadership through what was a 14-0 run to close it out, including a runner from the Senior with five seconds remaining on the team’s final possession to successfully double up Penn Yan with an 18-9 advantage to carry into the second quarter.

Penn Yan’s mission for the remainder of the game was to top the bar that the Lions set after the opening eight, as they got to within six points in the second quarter behind a capitalization of a breakaway basket from Oliver Connelly, and later another long Emerson three-pointer to help close the gap at the break.

With Schmidt having laid down the foundation for the second half, it was now on Dunbar to emerge triumphant with his dose of leadership.

Dunbar took control of the Wellsville offense on both ends of the floor, powering the defense with his play off the glass and transitioning it to some big baskets down low with 13 of his game-high 25 points coming at one of the more crucial times in the contest. The defense was the main highlight in the third quarter, holding Penn Yan to just nine points in the midst of a 14-9 run that saw their lead push back out to double digits.

Auman commended the defensive efforts of both Aidan Riley and Tyler Vogel for their assignment on one of Penn Yan’s sharpest shooters in Connelly, who was held to just one more field goal in that third quarter before being completely shutdown for the remainder of the game.

“At the end of the day, we were able to take away one of their best players in Connelly. He only had eight points, two in the second half,” he said. “He typically scored 20 points a night for them, and that’s just a testament to Aidan and Tyler staying close with him all game to never allow him to get going. We let (Brigham) Hansen go a little bit in the second half, and that’s a Senior that they don’t want to lose. They got desperate at the end, but it was a tough fight that we found a way to battle through.”

In a fourth quarter that saw both the Mustangs and Lions score 18 points a piece, it also saw the rise of Brigham Hansen for the visitors in blue and orange, making one final attempt to counter Wellsville with four consecutive shots from the field, two from long range to score 11 of his team-high 17 points in the last eight minute period to get within range, by as little as seven.

But just as the tide started to turn, Wellsville halted it. After a big 1-and-1 for the Lions awarded to Cody Costello, they would gather a massive offensive rebound which was grabbed by Dunbar underneath. After a series of passes around, it would eventually land right back into the arms of Costello, who knocked down a back-breaking deuce from inside to essentially lock up the team’s 12-point win to eliminate the Mustangs from the Class B2 Playoff picture.

“Every Sectional win is a good win. That’s a fairly good team that can score a lot of points on any given night, and we did a good job defensively against that,” said Auman. “They made a little run in the fourth quarter, and we started to get tired a bit. We have some learning lessons to take away from this, but outside of that, I loved the energy and the intensity we played with for the whole game. I liked our confidence, and we handled the high-intensity game that Penn Yan presented for us really well.”

Following behind Dunbar’s game-high performance was Schmidt, who recorded 22 additional points for the Lions. Costello would finish as the third scorer with at least 10 points, finishing with 10 exactly.

With the victory, it clinches a spot in the Class B2 Semifinal round for Wellsville, as they now begin preparations for the next three days to take on top-seeded Dansville in the final hurdle before next weekend’s Finals at Webster Schroeder.

Auman says that his team will have to work their way through it with their backs up against the wall, if they want to punch their ticket to the Finals — a trip the program hasn’t made since the 2018-19 season when they last won it all.

“Dansville is one of the best offensive rebounding teams I think I’ve ever seen, and we have to go to the hardest level we’ve been for the next three days to try and keep them off the glass,” he said. “They’re the number one seed for a reason. They have a ton of great wins this year, they’re very Senior heavy, and that’s going to have our backs up against the wall. These three days of hard work to prepare for them will hopefully allow us to meet that challenge. We’re not satisfied with just a Semifinals appearance. We have to get one.”

Both teams will meet at a neutral site on Wednesday with a tip-off time yet to be determined. 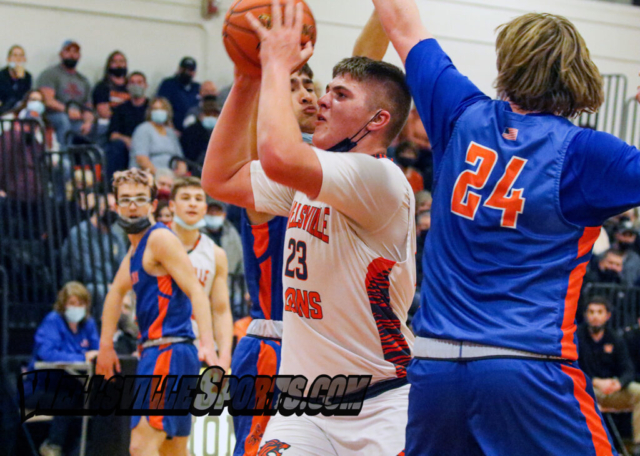 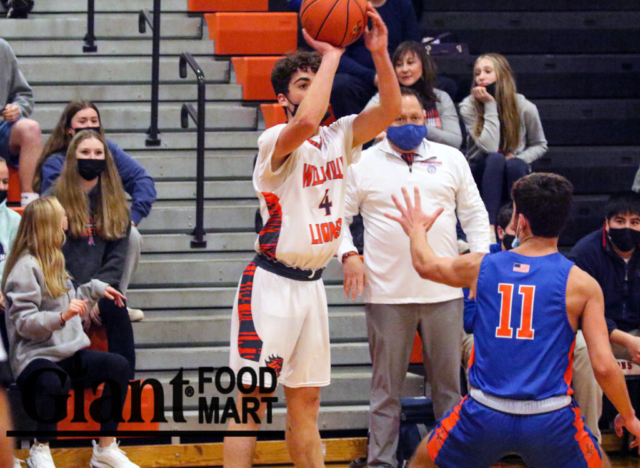 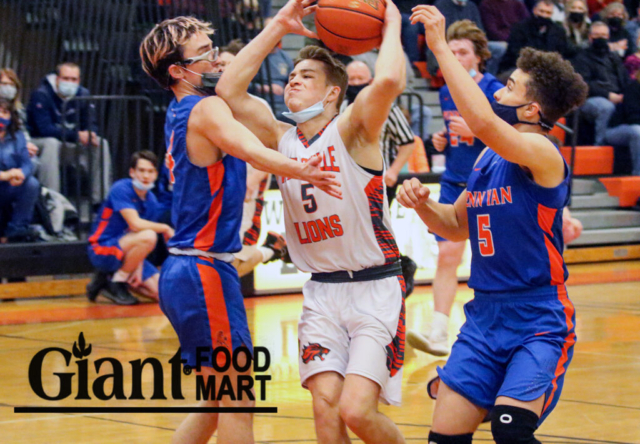 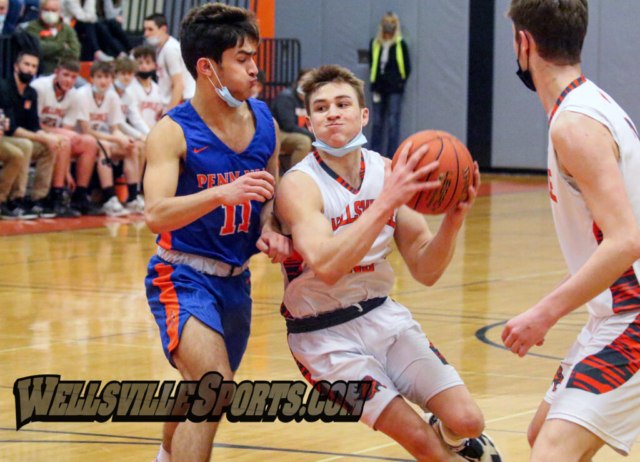 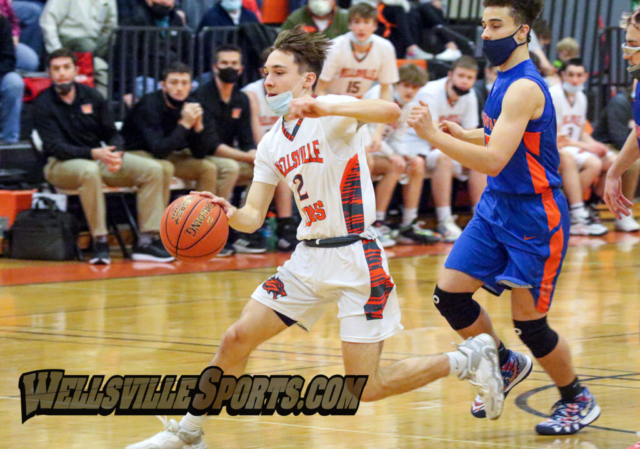 Inside the decision: Allegany County won’t be funding the Wellsville Airport in 2022