Seth Boehnke has been working hard learning to forge metal for about three years. He has invested in trade schools like the New England School of Metalwork and spent thousands of hours honing his skills and artistic style.

Yesterday, Boehnke, who lives across the street from the Wellsville High School, inadvertently brought a lot of attention to his work and tested the Wellsville Police response time. Seth explains how the event began:

“I walked over to show the folks next door at Lietzells what a differential heat treat looked like on a knife and the hamone that can be created. On my way out the door I looked over at the bridge and decided to walk over and see if the river was fishable.”

Walking across the street from the Wellsville High School, Seth was openly holding his knife in hand, taking mental measurements that are essential to the process.

“….before I put the handle on a full tang blade I hold it in my hand and walk around with it till I forget it’s there. It helps me decide what handle material I need to put on it, as far as weight and width.”

As the metalsmith strolled to the river, someone in the school was alarmed enough to call the police about a knife-wielding man near the school. Forty eight seconds later as Boehnke turned to stroll back home, Officer John Valentine pulled up and was happy to find that it was Boehnke, a veteran of the US Marine Corp.

Officer Valentine told Seth that they had received a call from the school and while they figured it was him, a serious response was necessary. Boehnke completely understood, “The thought never even entered my mind I was doing anything wrong.”

“I’d also like to state the cops were great. John Valentine is a good officer and if something had been going wrong at the school I’m glad they responded so quickly. But that school is safer with me next door. Not in more danger. I invited John into my apartment to look at the progress I was making on my other knives. He came in we chatted and I apologized.”

Seth has been working hard on the trade for several years now, making and selling custom blades and other unique metalworks. Below you can see some of his functional art, from coat hooks to hairpieces.

“I’ve been working with metal for 4 years or so. I just started getting ok… but the blade in question was actually given to me by master smith Tim Potier in Maine at the New England school of metal work. He gave each of is students a rough forged and ground blade by him in hopes the student in time will have enough skill to finish it. That was two three years ago. Plus this particular blade he did had what’s known as a hillbilly hamone on it with takes a lot of extra time and effort to bring out.” 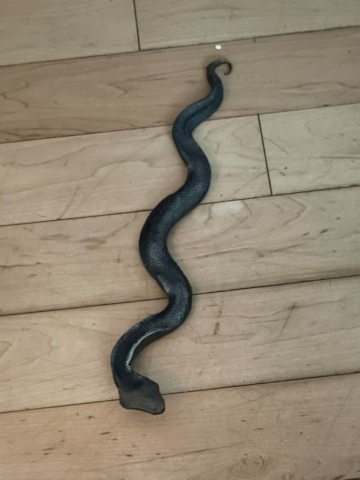 Column: Protect small business from the threat of China