ARKPORT — Aside from a double forfeit shared by both teams in the 215 pound bout, it was complete domination displayed by the Lions of Wellsville on the mat over the road on Tuesday, as the team garnered all 12 official matches to hang in the win column, eight of them in competition, to stroll past Arkport/Canaseraga with a 69-0 shutout.

The Lions started a brilliant night of wrestling off on one of the strongest of notes with an overpowering performance from Jayden Acker at 118 pounds, as he racked up the points against Arkport/Canaseraga’s Connor Smith, taking the 9-1 major decision.

After a Hayden Cunningham forfeit win at 126 pounds, Wellsville went on to record six straight wins on the mat — four by pinfall, and two by decision. Landon Stratton (132 pounds), Brayden Riley (145 pounds), Xander Outman (160 pounds) and Noah Black (172 pounds) all recorded wins by pinfall, with Black recording the quickest pin of the night in just 12 seconds.

Jack Cicirello (138 pounds) and Matt Ritter (152 pounds) collected 9-4, and 7-1 decision wins to help the cause. The team would add one last win in competition from Gabe Black at 285 pounds, as he pinned Ruben Diaz with 39 seconds left in the third period.

Rounding off the victories for the Lions were Shane Davidson (189 pounds), Blake Geffers (110 pounds) and Jensen Spicer, all of which were deemed victorious via forfeit.

Wellsville will close out their regular season next week with one final home match, as they welcome in Fillmore/Keshequa for a 6 p.m. bout next Tuesday night.

BOLIVAR — Sectionals are right around the corner, and for the Wolverines of Bolivar-Richburg, they were tasked with perhaps their toughest feat of the season on Tuesday: the Canisteo-Greenwood Redskins, their wrestling nemesis off to the east.

Out of the eight matches that took place on the mat, five of them were awarded to Bolivar-Richburg. The wins would help erase an early deficit to the Redskins to close the gap to within six points coming down the stretch. But then, the forfeits began to pile up against them. As a result, Canisteo-Greenwood capitalized to branch out their lead permanently to seal up a 48-24 win on Tuesday.

“The low numbers has been something we’ve battled with all year, but when we look forward to the head-to-head battles, especially this match, it helps,” said Wolverines coach Andrew Taylor. “Canisteo is tough, and there’s nothing given to us when we wrestle a team like them. Tavyn’s (MacDonell) just getting over sickness, but he wrestled tough tonight and he keeps working hard. Junior (McDowell) has been here all year, and he knows what he needs to do. He couldn’t control the kid’s pace, but he’s one of the top guys at 110. He’s got his sights on a great postseason.”

After a 152 pound forfeit win for the Redskins began the night, the Wolverines would quickly follow with a strong performance from Tavyn MacDonell at 160 pounds against Keegin Christian, taking an early 4-0 lead through the opening period before a massive four-point swing in the last 30 seconds of the next period, keyed off a big reversal, was awarded to Christian.

MacDonell acted rapidly however, as he grabbed a huge one-point escape in the process of the reversal to grab the lead back, finishing it off with one final takedown in the third period to claim the 7-4 decision.

Canisteo-Greenwood’s largest lead of the night at that point would climb to 18-3 after back-to-back pinfall wins for Braidon Woodward and Dominic Dennis at 172, and 189 pounds respectively. Bolivar-Richburg would regain traction however in the heavyweight division, cutting the deficit back down to three points with consecutive wins themselves.

It would start with Caden Allen at 215 pounds, and end with Trent Sibble immediately following at 285 pounds, as the two Wolverines recorded the match’s fastest pins, with Allen claiming victory over Alik Yencer with a 32-second pin, while Sibble was quicker, pinning Brody Houghtaling in just 23 seconds.

Both teams would trade wins back at the top, in the lightweight division, as Cael Stewart branched the Redskins lead back out with a 1:08 pin of James Gleason at 102 pounds, while Gary McDowell fought hard at 110 pounds all throughout his bout with Dylan Depew-Cappadonia, scoring four big points and hanging onto them until the end to earn the 4-0 decision win.

Canisteo-Greenwood would add in a forfeit win from Austin Hall at 118 pounds before Trey Buchholz delivered the final win for the Wolverines at 126 pounds through a fierce battle with Mathias Sharp. With an early reversal in hand, Buchholz went to work by garnering multiple takedowns to cushion his lead before digging in to record a pinfall win with 18 seconds left in the second period, closing the gap down to 30-24 entering the last three matches.

But time would run out on Bolivar-Richburg, as Canisteo-Greenwood finished off the night with three straight forfeit wins from Josh White (132 pounds), Gavin Bob (138 pounds) and Colton Havens (145 pounds), taking the 24-point win back home with them.

Bolivar-Richburg gets back onto the mat one final time at home on Thursday for Senior Night, as they host Letchworth in a 6:30 p.m. bout before leaving for the Arkport/Canaseraga Dual Tournament this weekend.

NUNDA — Behind solid victories from Alivia Cartwright and Ryan Vedder on the mat, Fillmore/Keshequa scooped up five enormous forfeit victories along the way to power up their final home match of the season on Tuesday, as they took care of business against visiting Campbell-Savona with a 42-18 victory up north in Nunda.

With an early 6-0 win in the wagon after a Graham Howe 110 pound forfeit was awarded to Fillmore/Keshequa, Cartwright was the first to dock a victory on the board from upon the mat for the hosts, as she battled hard across the first two periods with Campbell-Savona’s Brayden Campbell before garnering the perfect positioning to capture the pinfall win in 2:11.

After the Panthers got on the board themselves one match later, Fillmore/Keshequa added to their lead with Vedder’s victory at 132 pounds, as he took care of business at the 3:37 mark to claim the win by pinfall. Campbell-Savona would collect wins in competition in two of the next three matches, sandwiched in between a 145 pounds double forfeit, including a clutch win by Blake Brooks over Eli Strickland at 152 pounds, scoring the pinfall win with just 11 seconds to go in the match.

Two more double forfeits were exchanged between both squads before Fillmore/Keshequa closed out the night with four consecutive forfeit wins to break an 18-18 tie, as David Bower (189 pounds), Gage Hartman (215 pounds), Caleb Green (285 pounds) and Jules Cotton (102 pounds) all recorded triumphs to help the team breakaway towards victory to finish off their homestand.

Fillmore/Keshequa will travel this weekend to participate in the Arkport/Canaseraga Dual Tournament before closing out their regular season next Tuesday night back on the road, visiting Wellsville in a 6 p.m. bout. 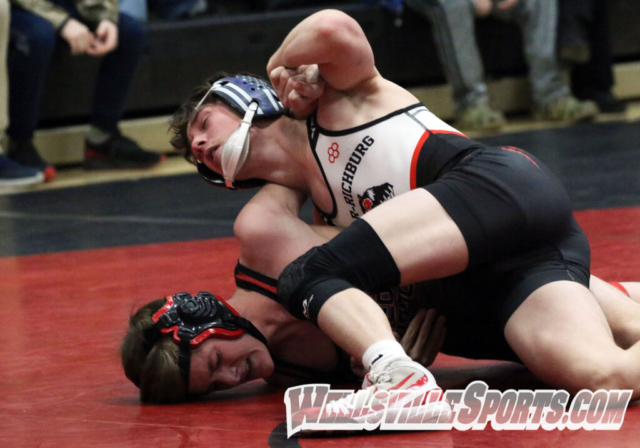 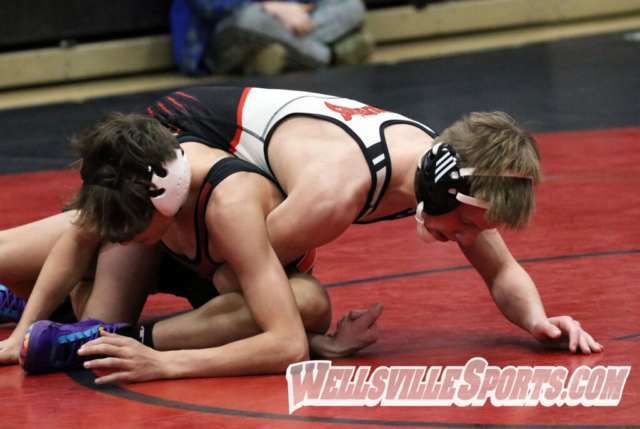 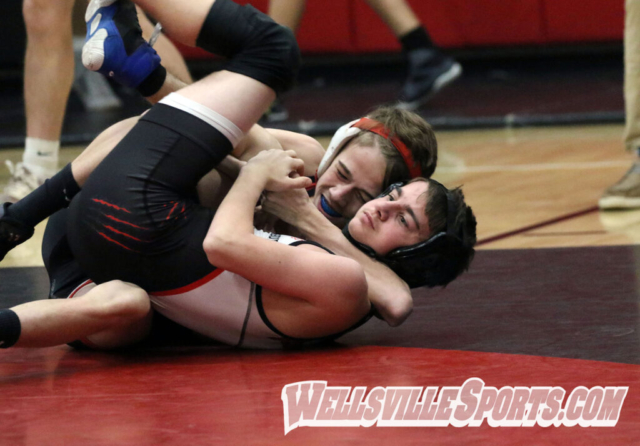 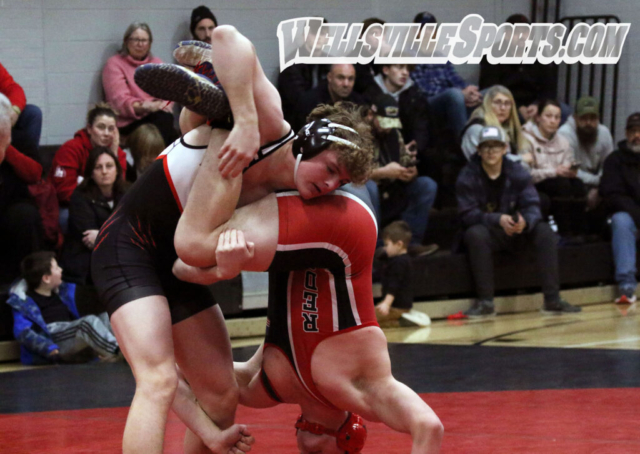 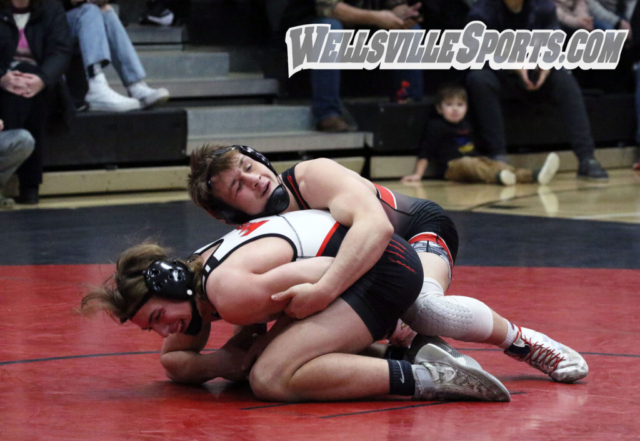 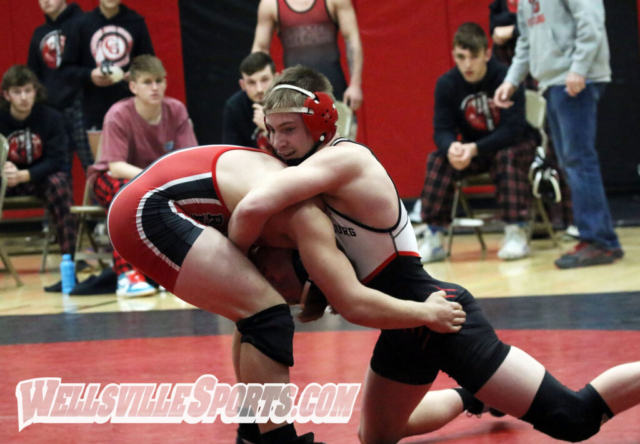 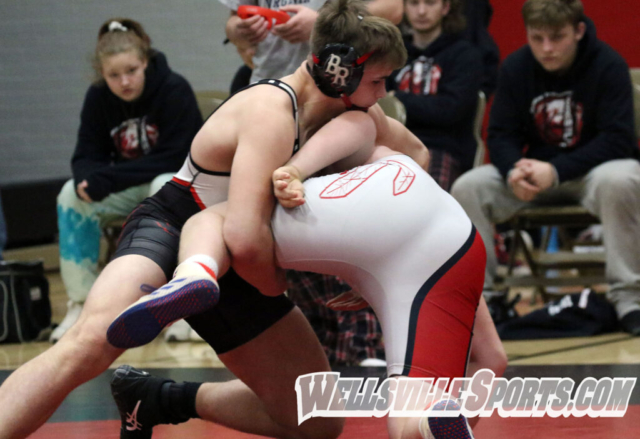 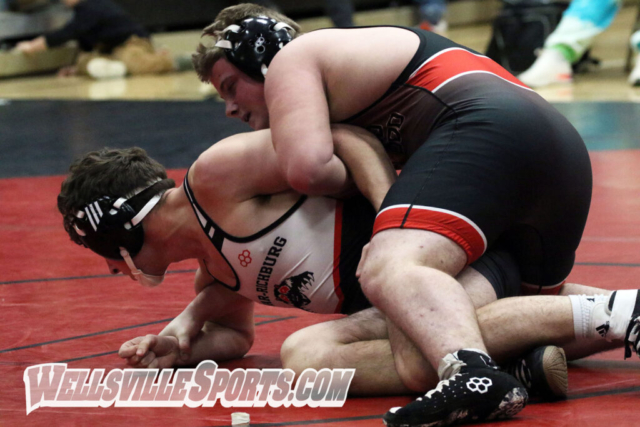